This article is about the term relating to heraldry. For the acrobatics derived from martial arts, see tricking (acrobatics).

Tricking is a method for indicating the tinctures (colours) used in a coat of arms by means of text abbreviations written directly on the illustration. Tricking and hatching are the two primary methods employed in the system of heraldry to show colour in black and white illustrations. 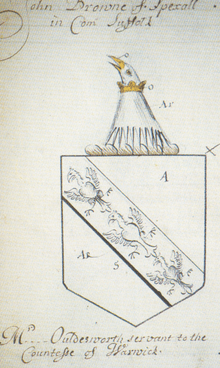 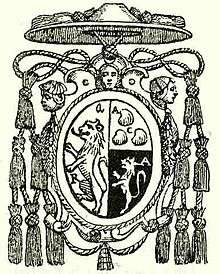 An example of early tricking. Coat of arms of Cardinal Giovanni di Aragona (1456-1485), archbishop of Esztergom, from the book of Alphonsus Ciacconius titled Historia Rom. Pontificum.

The system of heraldry has always had some methods to designate the tinctures of arms. The earliest such method was blazon, which is describing the arms by words and is as old as heraldry itself. We can find the first blazon in the work of Chrétien de Troyes (c. 1135-c. 1183) titled Lancelot ou le Chevalier de la Charette (c. 1178-c. 1181). The English heraldry system still uses a form of blazon almost unchanged since the reign of Edward I. Traditionally, the images of heraldic manuscripts like the rolls of arms and armorial books are all coloured. However, later on, with the development of book printing as also with the invention of woodcuts and copperplate engravings, there arose the need for designating the colours on uncoloured illustrations as well. As a rule, two main methods were applied to achieve this – tricking or giving designations to the tinctures after the initials of the given colours, and hatching which is ascribing designations to the tinctures by means of lines and dots. While the first method was introduced and developed by the heralds, the second model was developed and adopted by the heraldists. In addition, some other methods were also in use such as giving designations to tinctures by using the numbers from 1 to 7.

In the beginning, tinctures were designated with the given names of the colours as described in the 1576 book by Martin Schrot (d. after 1581), titled Wappenbuch. In his book Baselische Chronik (1580) Cristian Urstis (1544–1588) named the tinctures after the initials of the given colours. Earlier, this method was applied by Virgil Solis (Wappenbüchlein, 1555), and Johann von Francolin (1560).

Almost simultaneously with Urstis, Don Alphonsus [Francisco] Ciacconius (1540–1599), a Rome-based Spanish Dominican scholar, named the tinctures after their Latin initials. Or (gold) was designated with A (aurum), argent (silver) or white, respectively with a (argentum), azure (blue) with c (cearuleus), gules (red) with r (rubeus), and vert (green) by v (viridis). Though the sign for sable (black) (Niger) was not present in his system traditionally it was designated with the black colour itself.

The magical view of tinctures

That was a time when heraldry was ruled by allegorical and astrological views. All this was in connection with the ancient lore of sympathies, which examined sympathies and antipathies among the stars, minerals, animals, plants, and people. Some additional tinctures were also designed by astrological symbols.

The Babylonians, according to the lore of sympathies, had great esteem for gems, semi-precious stones and scarce minerals. They saw them as the concentrates of cosmic powers. Pliny the Elder stressed several times that he wrote his work to reveal this universal law (i. e. the lore of sympathies). This doctrine was taken over by the Medieval medicine, pharmacy, alchemy, heraldry etc. During the 1350s, the work of Bartolo de Sassoferrato (1313/1314-1357) linked Or to the sun, Azure to the element air, and Gules to the element fire. Between 1382 and 1387 he was followed by Honoré Bonet (c. 1340-c. 1410), a heraldist from Provence. In his work Arbre des Batailles (1387) Bonet declares that the metal gold is the noblest in the world because, due to its very nature, is bright and shining and full of virtues.

The work of Bonet was thoroughly studied by the 15th century Burgundian heraldists and Jean Courtois (†1436) called Sicily Herald. In his work Le Blason des Couleurs (1414), Courtois developed a heraldic system consisting of the tinctures, planets and carbuncles (furthermore, the virtues, metals, months, the zodiac, and weekdays among others). He was familiar with the Etymologies of Isidore of Seville, and also he gave the names of the tinctures in Greek. However, his main contribution was the development of gemstone-planetary blazon. The system that Bonet developed was as a mix of the colour-gemstone-planet: or topaz the sun, argent pearl the moon, gules ruby the Mars, sable diamond the Saturn, azure sapphire the Jupiter, vert emerald the Venus, purpure amethyst the Mercury, tenné jacinth the dragon's head, sanguine/murrey sardonyx the dragon's tail.

Tenné and Sanguine were the stains used in the abatements of arms which were dishonorable charges placed upon the coats of arms of malefactors. Dragon's head and dragon's tail were in use from the late ancient times. While the dragon's head (called also Anabibazon in astronomy and astrology) symbolizes a light colour (tenné), dragon‘s tail (called also Catabibazon) symbolizes a dark colour (sanguine) which in miniature corresponds to transmutation, provided by alchemists. The purpose of this process is to produce the philosopher's stone. During the process, as a result of the successive reactions, the materia prima will get transformed to a darker and more reddish one from the light coloured material. In the astrology dragon‘s head is connected to good luck, while dragon‘s tail is linked to unlucky events. All these indicate that the then contemporary heraldry was strongly under the influences of magical views and alchemistic ideas, which in turn were connected to the lore of the sympathies between the colours, planets, gemstones, metals, virtues etc. (The odd terminology of colours used by Heraldus Britannus, as mentioned by Spener, can partly reflect the view of alchemy: aurum–cytrine, argentum–aspre, rubeus–coccine, caeruleus– veneto, Niger–mauro, viridis–prasino, and purpureus–oiscy.)

The work of Jean Courtois was diffused in manuscripts and later became one of the first books printed in French. Shortly it was published in England as well, but without much impact. However, during the Tudor and Stuart dynasties (1485–1702), it appeared in the then heraldry manuals. In his book Traité du blason (1465), Clément Prinsault deals with the relation of colours to the virtues, the seven planets, the 12 celestial signs, gemstones, weekdays, the three elements etc. This book is one of the earliest writings on heraldry that is available today.

The English historian and heraldist Sir Henry Spelman (1564–1641) applied in his 1654 book titled Aspilogia the symbols of the planets to designate tinctures (presented in the table). Sir John Ferne (†1609) enumerates as many as 14 different methods of blazon: 1. by colours, 2. by planets, 3. by precious stones, 4. by virtues, 5. by celestial signs, 6. by the months of the year, 7. by the days of the week, 8. by the ages of man, 9. by flowers, 10. by the elements, 11. by the seasons of the year, 12. by the complexions of man, 13. by numbers, 14. by metals. Though today its practice is considered absurd, it was an organic part of the then heraldic view. 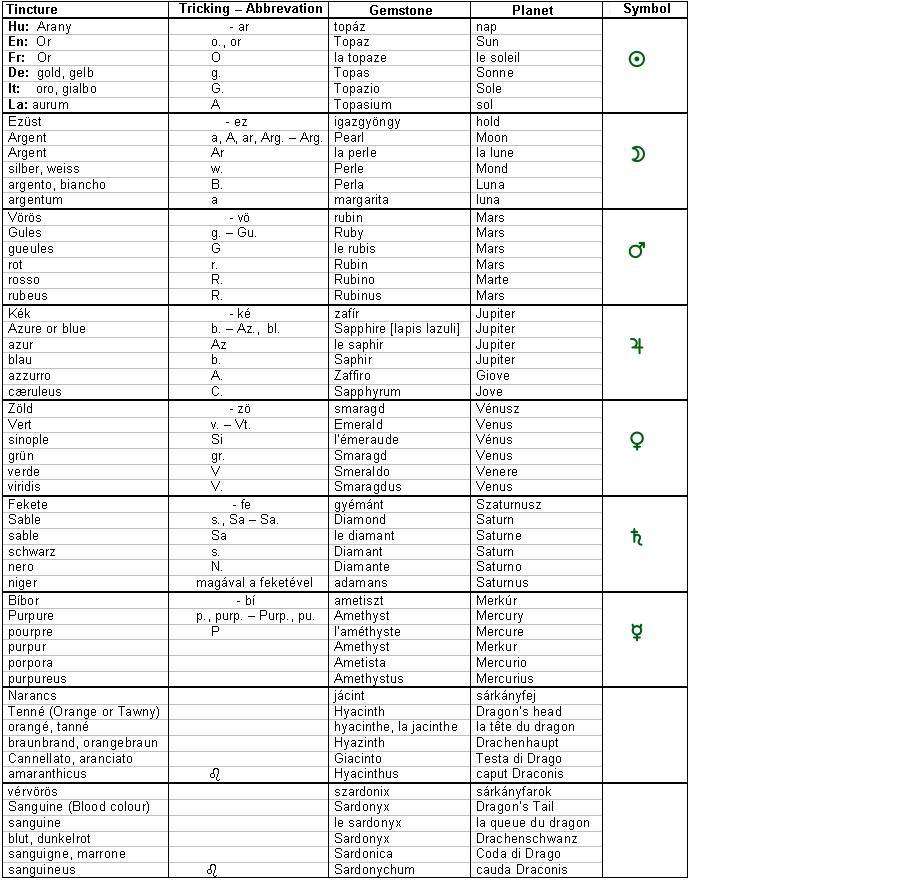 Apart from the main tinctures, there also existed English and other language tricking abbreviations for some other tinctures (such as Proper – ppr, pp, Ermine – er etc.). To designate carnation (carnea tinctura), the then contemporary heraldry applied the zodiac sign of Leo in reverse (

). Besides the planetary sign of Venus, Rudolphi also refers to trefoil (

) as a designation of colour vert. He also assigned the specific lengthy variants of astrological signs dragon's head and dragon's tail to the tinctures orange and carnation, respectively(

). Furthermore, the tincture Purpure being abbreviated by the letter p. (de: Purpur), and the grey by the letter a. (Asche-Farb).[1] The astrological signs of the ascending and descending nodes (dragon's head and dragon's tail:

were also derived from the zodiac sign of Leo that was highly esteemed in the Renaissance age astrology.

So, besides these seven principal tinctures, there soon emerged some additional colours, which were also symbolized by the planetary symbols, gemstones, weekdays etc. Thus, a system of nine tinctures was developed. In general, it was said that the great magnates – the dukes, the earls, and the barons – were to have their arms blazoned by gemstones, and that the princes, the kings and the emperors were to have their arms blazoned by the planets. However, the Austrian troubadour and herald Peter Suchenwirt (c. 1320-1395) used gemstones to designate the tinctures even earlier (c. 1355) to describe the coat of arms of the Hungarian king Louis the Great (1342–1382).[2] In his poem titled Turnier von Nantheiz (c. 1258) Konrad von Würzburg (c. 1230 -1287) also mentioned some coat of arms made of gemstones. In his blazon on the arms of the king of England (lines 310-320) we can learn that his escutheion was covered with Arabian gold and his leopards were made of rubies; finally, to the end of his work (1040) we can also read about further precious stones applied on coat of arms.[3]

The letters of tricking were often traced badly since they were not of immediate understanding for the reader always, thus leading to erroneous interpretations. Heralds did not like hatching, and the College of Arms gave preference to tricking even beyond the 17th century, sometimes even on the coloured and hatched images. It was so because the tricking was a simpler way to the drawer than hatching to designate the tinctures.

Otto Titan von Hefner maintained that the first traces of hatching on the woodcuts began during the 15th and 16th centuries. Both tricking as well as hatching was applied by the Benedictine monk, philologist and outstanding historian Vincenzo Borghini (Florence, Oct. 29, 1515 – Aug. 18, 1580, Florence). He drew a difference between the metals and the colours on the woodcuts of his work by leaving the places blank on the arms for all metals; similarly all colours were hatched by the same way, as the colour vert is being used today. Besides this, tinctures were designated in the fields and on the ordinaries and charges by tricking: R–rosso–gules, A–azure–azure, N–nigro–sable, G–gialbo–yellow (or), and B–biancho–white (argent). Notably, the vert was not present on the arms presented by him.

Since the early 17th century, tricking declined. However, it is sometimes still in use, mainly in British heraldry.