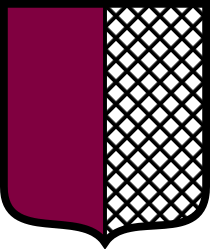 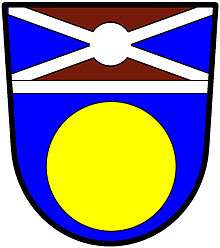 Murrey is used on these de Jong arms: Azure, a bezant; a chief per saltire, murrey and azure, filleted argent, over the partition a fillet saltire nowy, also argent. 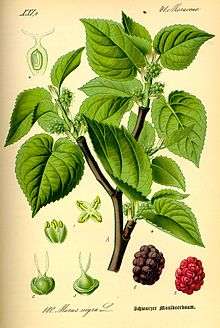 The mulberry (Morus nigra), with its reddish-purple fruit, gives its name to the stain murrey.

In heraldry, murrey (/ˈmʌri/) is a "stain", or a non-standard tincture, of a dark reddish purple colour.

According to dictionaries, murrey is the colour of mulberries, somewhere between gules (red) and purpure (violet), almost maroon;[1] but examples registered in Canada[2] and Scotland[3] show it as a reddish brown.

The livery colours of the House of York in the fifteenth century were azure and murrey, as depicted on the shields of the Falcon of the Plantagenets and the White Lion of Mortimer, two of the Queen's Beasts.[4]

The Flag of the Second Spanish Republic (in the 1930s) was a tricolour of horizontal stripes of red, yellow and murrey.