The so called rule of tincture: metal should not be put on metal, nor colour on colour (Humphrey Llwyd, 1568). This means that Or and argent (gold and silver, which are represented by yellow and white) may not be placed on each other; nor may any of the colours (i.e. azure, gules, sable, vert and purpure) be placed on another colour. Heraldic furs (i.e. ermine, vair and their variants) as well as "proper" (a charge coloured as it normally is in nature) are exceptions to the rule of tincture. 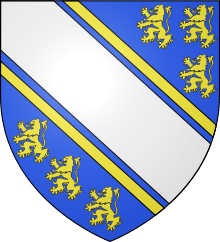 The rule of tincture does not apply to furs, nor to charges blazoned "proper" (displayed in their natural colour, which need not be a normal heraldic tincture).[1] The blazoning of a charge "proper" can therefore be used as a loophole when its natural coloration equates to or approaches another heraldic tincture it is desired to overlie. An example would be a white horse proper, since without breaking the rule of no metal on metal it could be placed on a field Or (gold), but a horse argent (silver horse), although visually indistinguishable, could not.

Simple divisions of the field are considered to be beside each other, not one on top of the other; so the rule of tincture does not apply. In practice, however, fields divided into multiple partitions, such as barry or checky, use (with extremely rare exceptions) an alternating pattern of metal and colour for adjacent units.

The rule also does not apply to charges placed upon party-coloured (divided) or patterned fields; a field party or patterned of a colour and metal may have a charge of either colour, metal, or party or patterned, placed on it (and there is a small body of precedent that a field party of two colours or two metals may have a charge or charges of either colour, metal, or party or patterned on it; examples of this certainly exist[2]). Likewise, a party-coloured (of colour and metal) charge may be placed on either a colour or metal background. Neither does the rule apply to the tongue, horns, claws, hoofs of beasts (for instance, a lion Or on an azure field could be langued [with his tongue] gules) when of a different tincture than the rest of the animal, or other parts of charges that are "attached" to them; for instance, a ship sable on an Or field may have argent sails as the sails are considered to be attached on the ship rather than charged on the field.

One important distinction, according to Fox-Davies, is that the rule of tincture also does not apply to crests or supporters, except in such cases as the crest or supporter itself is treated as a field and charged with one or more objects.[3] For instance, a gold collar about the neck of an argent supporter is common, but if eagle wings are used as a crest and charged with a trefoil (such as the coat of arms of Brandenburg), the trefoil must conform to the rule of tincture.

Another apparent violation that is not regarded as such is the "very uncommon" practice of a bordure of the same tincture of the field being blazoned as "embordured"; while well known in former times this is unusual in the extreme today.[4] How technical the rule is can be seen by the fact that if this were blazoned as Gules... a bordure of the field..., though of identical appearance, it would be considered a blatant violation.

The colours bleu celeste and the U.S. Institute of Heraldry-invented buff have sometimes been treated (with respect to the rule of tincture) as if they are metals, though such a treatment is certainly of debatable propriety.

Marks of cadency (whether bordures,[5] the marks of the English cadency system, or any other mark), and presumably marks of distinction, can be exceptions to this rule. For example, many members of the French royal house had a red border or bend against the blue field.[6] Also, in Great Britain, cantons added to indicate baronetcy of Ulster (argent, a hand couped gules) ignore this rule; otherwise they could be displayed by no one with a metal field. Augmentations and, in theory, abatements do not have to conform to the rule.

Another violation which is usually not worried about is a green mount on a blue field representing the sky, and some of the methods of depicting the sea, waves or the like are similarly treated. A green trimount also appears in the coat of arms of Hungary (shown below). In this case the field is gules (red); the rule of tincture should therefore exclude this use of a vert (green) trimount. Instead, there is a trimount vert used in violation of the rule. However, it has been argued by some that the mount vert or trimount issues from the base of the shield rather than being a charge on it, causing the rule not to apply.

Fimbriation, the surrounding of a charge by a thin border, can obviate what would otherwise be a violation of the rule, as in the Union Jack (which, although a flag rather than a shield, was designed using heraldic principles). The divise, a thin band running underneath the chief in French heraldry, can also obviate a violation, as can the parallel fillet in English heraldry. 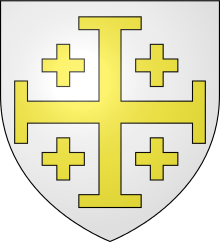 This rule is so closely followed that arms that violate it are called armes fausses (false arms) or armes à enquérir (arms of enquiry); any violation is presumed to be intentional, to invite the viewer to ask how it came to pass.

One of the most famous armes à enquérir (often erroneously said to be the only example) was the arms chosen by Godfrey of Bouillon,[7] and later used by his brother Baldwin of Boulogne when he was made King of Jerusalem, which had five gold crosses on a silver field (traditionally rendered "Argent a Cross potent between four plain Crosslets Or"). This use of metal on metal is seen on the arms of the King of Jerusalem, the Bishop's mitre in the arms of Andorra, and the arms of the county of Nord-Trøndelag in Norway (which is based on the arms of St. Olav as described in the sagas of Snorri). It indicates the exceptional holy and special status of this particular coat of arms.

An example of "colour on colour" is the arms of Albania, with its sable two-headed eagle on a field gules.

This rule is perhaps most often violated by a chief, leading some commentators to question whether the rule should apply to a chief, or even whether a chief should be considered a charge at all rather than a division of the field. These violations usually occur in the case of landscape heraldry and augmentations. French civic heraldry, with its frequent chiefs of France (i.e. "on a field azure, three fleurs-de-lys or", alternatively "azure, seme-de-lys or"), often violates this rule when the field is of a colour. The coat of arms that appears on the famous tapestry of the Lady with the Unicorn was attributed until now by specialistes to the older branch and to the chief of the family Le Viste, Jean IV Le Viste, but it blatantly breaks the rules of French Heraldry. A new study of the tapestry suggests the probability of the intervention of a descendant of the younger branch, Antoine II Le Viste, as a sponsor of the tapestry, and indicates that the incorrect superposition of colours could have been a deliberated choice intended to apprise the observer in an excplicit manner that he was faced with the familiar phenomenon of the modifications of the arms by a mark of cadency.[8] The arms of Harvard Law School, "on a field azure, a chief gules", is another example. An example from medieval England quoted by John Gibbon in 1682 is the arms of Denys of Siston, Gloucestershire, "gules, 3 leopards' faces jessant-de-lys azure over all a bend engrailled azure".[9]

In French heraldry, the term cousu ("sewn") is sometimes in blazon used to get around what would otherwise be a violation of the rule; though this is used generally, occasionally a distinction is drawn between the cousu of colour on colour and the soudé ("soldered") of metal on metal, though this has fallen from fashion to a large degree. In Italian heraldry terms such as per inchiesta are used in the blazons of the extremely rare violations of the rule, to acknowledge their exceptionality or impropriety.[10]

The rule of tincture has had an influence reaching far beyond heraldry. It has been applied to the design of flags, so that the flag of Saxe-Weimar-Eisenach was modified to conform to the rule.[11] Pragmatically, it is a useful rule of thumb for the design of logos, icons and other symbols.