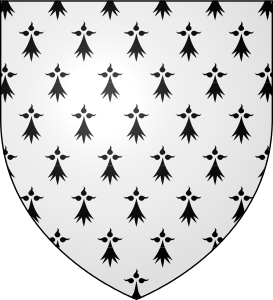 The coat of arms of the former Duchy of Brittany

Ermine (/ˈɜːrmᵻn/) in heraldry is a "fur", or varied tincture, consisting of a white background with a pattern of black shapes representing the winter coat of the stoat (a species of weasel with white fur and a black-tipped tail). The linings of medieval coronation cloaks and some other garments, usually reserved to use by high-ranking peers and royalty, were made by sewing many ermine furs together to produce a luxurious white fur with patterns of hanging black-tipped tails. Due largely to the association of the ermine fur with the linings of coronation cloaks, crowns and peerage caps, the heraldic tincture of ermine was usually reserved to similar applications in heraldry (i.e., the linings of crowns and chapeaux and of the royal canopy).[1] 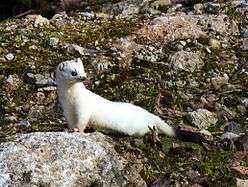 A stoat in winter fur.

The ermine spot, the conventional heraldic representation of the tail, has had a wide variety of shapes over the centuries; its most usual representation has three tufts at the end (bottom), converges to a point at the root (top), and is attached by three studs. When "ermine" is specified as the tincture of the field (or occasionally of a charge), the spots are part of the tincture itself, rather than a semé or pattern of charges. The ermine spot (so specified), however, may also be used singly as a mobile charge, or as a mark of cadency signifying the absence of a blood relationship.[2]

On a bend ermine, the tails follow the line of the bend. In the arms of William John Uncles, the field ermine is cut into bendlike strips by the three bendlets azure, so the ermine tails are (unusually) depicted bendwise.

Though ermine and vair were the only two furs known to early armory, other variations of these developed later.[2]

Ermines is the reverse of ermine – a field sable semé of ermine-spots argent. It is sometimes called counter-ermine (cf. French contre-hermine and German Gegenhermelin).[2]

Erminois is ermine with a field Or instead of argent, and pean is the reverse of erminois (i.e. Or spots on a field sable).

Erminites is supposed to be the "same as ermine, except that the two lateral hairs of each spot are red."[3] James Parker mentions it,[4] as does Pimbley,[5] though by the former's admission this is of doubtful existence. Arthur Charles Fox-Davies describes it as a "silly [invention] of former heraldic writers, not of former heralds."[6]

Other combinations of tinctures are explicitly stated, as in "gules ermined argent" (red with white ermine spots).