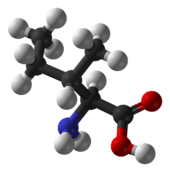 An organic compound, the L-isoleucine molecule, with typical features of organic compounds: a carbon chains that includes carbon–carbon bonds, carbon–hydrogen bonds, other covalently bonded elements such as oxygen and nitrogen, as well as a complex molecular structure displaying chirality. Not all organic compounds have all these features, as the precise definition of an organic compound may vary.

An organic compound is any member of a large class of gaseous, liquid, or solid chemical compounds whose molecules contain carbon. For historical reasons discussed below, a few types of carbon-containing compounds, such as carbides, carbonates, simple oxides of carbon (such as CO and CO2), and cyanides are considered inorganic.[1] The distinction between organic and inorganic carbon compounds, while "useful in organizing the vast subject of chemistry... is somewhat arbitrary".[2]

Organic chemistry is the science concerned with all aspects of organic compounds. Organic synthesis is the methodology of their preparation.

The word organic is historical, dating to the 1st century. For many centuries, Western alchemists believed in vitalism. This is the theory that certain compounds could be synthesized only from their classical elements—earth, water, air, and fire—by the action of a "life-force" (vis vitalis) that only organisms possessed. Vitalism taught that these "organic" compounds were fundamentally different from the "inorganic" compounds that could be obtained from the elements by chemical manipulation.

Vitalism survived for a while even after the rise of modern atomic theory and the replacement of the Aristotelian elements by those we know today. It first came under question in 1824, when Friedrich Wöhler synthesized oxalic acid, a compound known to occur only in living organisms, from cyanogen. A more decisive experiment was Wöhler's 1828 synthesis of urea from the inorganic salts potassium cyanate and ammonium sulfate. Urea had long been considered an "organic" compound, as it was known to occur only in the urine of living organisms. Wöhler's experiments were followed by many others, where increasingly complex "organic" substances were produced from "inorganic" ones without the involvement of any living organism.[3]

Even though vitalism has been discredited, scientific nomenclature retains the distinction between organic and inorganic compounds. The modern meaning of organic compound is any compound that contains a significant amount of carbon—even though many of the organic compounds known today have no connection to any substance found in living organisms.

But, even the broadest definition (of "carbon-containing molecules" as organic) requires excluding alloys that contain carbon, including steel. Other 'excluded' materials are: compounds such as carbonates and carbonyls, simple oxides of carbon, simple carbon halides and sulfides, the allotropes of carbon, and cyanides not containing the −C≡N functional group—all which are considered inorganic.

The "C-H" definition excludes compounds that are historically and practically considered organic. Neither urea nor oxalic acid is organic by this definition, yet they were two key compounds in the vitalism debate. The IUPAC Blue Book on organic nomenclature specifically mentions urea[4] and oxalic acid.[5] Other compounds lacking C-H bonds that are also traditionally considered organic include benzenehexol, mesoxalic acid, and carbon tetrachloride. Mellitic acid, which contains no C-H bonds, is considered a possible organic substance in Martian soil. C-C bonds are found in most organic compounds, except some small molecules like methane and methanol, which have only one carbon atom in their structure.[6]

The "C-H bond-only" rule also leads to somewhat arbitrary divisions in sets of carbon-fluorine compounds, as, for example, Teflon is considered by this rule to be "inorganic", whereas Tefzel is considered to be organic. Likewise, many Halons are considered inorganic, whereas the rest are considered organic. For these and other reasons, most sources believe that C-H compounds are only a subset of "organic" compounds.

In summary, most carbon-containing compounds are organic, and almost all organic compounds contain at least a C-H bond or a C-C bond. A compound does not need to contain C-H bonds to be considered organic (e.g., urea), but most organic compounds do.

Another distinction, based on the size of organic compounds, distinguishes between small molecules and polymers.

Natural compounds refer to those that are produced by plants or animals. Many of these are still extracted from natural sources because they would be more expensive to produce artificially. Examples include most sugars, some alkaloids and terpenoids, certain nutrients such as vitamin B12, and, in general, those natural products with large or stereoisometrically complicated molecules present in reasonable concentrations in living organisms.

Most polymers (a category that includes all plastics and rubbers), are organic synthetic or semi-synthetic compounds.

Several compounds are industrially manufactured utilizing the biochemistry of organisms such as bacteria and yeast. Two examples are ethanol and insulin. Regularly, the DNA of the organism is altered to express desired compounds that are often not ordinarily produced by that organism. Sometimes the biotechnologically engineered compounds were never present in nature in the first place.

There is a great number of more specialized databases for diverse branches of organic chemistry.