Chaplet of the Divine Mercy 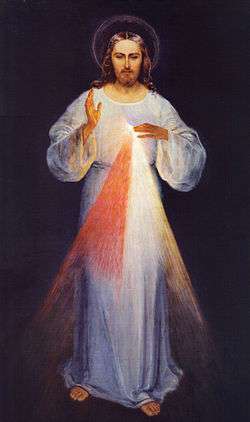 The original Painting of Divine Mercy by Eugeniusz Kazimirowski, painted in 1934 in Vilnius under the guidance of Saint Mary Faustina Kowalska.

The Chaplet of the Divine Mercy, also called the Divine Mercy Chaplet, is a Christian devotion to the Divine Mercy,[1] based on the Christological apparitions of Jesus reported by Saint Faustina Kowalska (1905–1938), known as "the Apostle of Mercy."[2][3] She was a Polish religious sister of the Congregation of the Sisters of Our Lady of Mercy and canonized as a Catholic saint in 2000.[4]

Faustina stated that she received the prayer through visions and conversations with Jesus, who made specific promises regarding the recitation of the prayers.[2] Her Vatican biography quotes some of these conversations.[4]

As a Roman Catholic devotion, the chaplet is often said as a rosary-based prayer with the same set of rosary beads used for reciting the Rosary or the Chaplet of Holy Wounds. As an Anglican devotion, the Divine Mercy Society of the Anglican Church states that the chaplet can also be recited on Anglican prayer beads.[5] The chaplet may also be said without beads, usually by counting prayers on the fingertips,[2] and may be accompanied by the veneration of the Divine Mercy image.[6][7]

On September 13, 1935, while Faustina was in Vilnius, she wrote of a vision of Jesus about the chaplet in her diary (Notebook 1 item 476).[8][9] Faustina stated that Jesus asked her to pray the chaplet and instruct others to do so. Although the chaplet is said on beads like the Rosary, it is about a third of the length of the Rosary, and unlike the Rosary that has evolved over the years, the form and structure of the chaplet has remained unchanged since Faustina attributed it to a message from Jesus.[9]

According to Faustina's visions, written in her diary, the chaplet's prayers for mercy are threefold: to obtain mercy, to trust in Christ's mercy, and to show mercy to others.[6][10][11] Faustina wrote that Jesus promised that all who recite this chaplet at the hour of death or in the presence of the dying will receive great mercy. She wrote that Jesus said:

"....When they say this Chaplet in the presence of the dying, I will stand between My Father and the dying not as the just judge but as the Merciful Savior."

Faustina stated that Jesus also promised that anything can be obtained with this prayer if it is compatible with His will. In her diary Faustina recounted a vision on September 13, 1935 in which she saw an angel sent to a city to destroy it. Faustina began to pray for God's mercy on the city and felt the strong presence of the Holy Trinity.[11] After she prayed the internally instructed prayers, the angel was powerless to harm the city. In subsequent visions, Faustina learned that the prayers she spoke were to be taught to all the people of the world.[12]

According to Roman Catholic tradition, the chaplet may be said at any time, but it is said especially on Divine Mercy Sunday and Fridays at 3:00 PM. The Chaplet is prayed daily at the National Shrine of The Divine Mercy in Stockbridge, Massachusetts. In the Philippines, Singapore, and Hong Kong the "3 o'clock Prayer" is broadcast on radio and television stations daily at 3:00 p.m. In 2000, Pope John Paul II ordained the Sunday after Easter Divine Mercy Sunday, where Roman Catholics remember the institution of the Sacrament of Penance. The hour Jesus died by crucifixion, 3:00 PM (15:00), is called the Hour of Mercy. In a novena, the chaplet is usually said each of the nine days from Good Friday to Divine Mercy Sunday.

Pope John Paul II was instrumental in the formal establishment of the Divine Mercy devotion and acknowledged the efforts of the Marian Fathers in its promotion in a Papal Blessing in 2001, the 70th anniversary of the revelation of the Divine Mercy Message and Devotion. Although the prayers said on the beads of the rosary chain share specific similarities between the Chaplet of Divine Mercy and the Chaplet of Holy Wounds, these are distinct chaplets and were introduced over 20 years apart, one in Poland, the other in France.[13]

This prayer is optional, and may be used to begin the Chaplet:

You expired, Jesus, but the source of life gushed forth for souls, and the ocean of mercy opened up for the whole world. O Fount of Life, unfathomable Divine Mercy, envelop the whole world and empty Yourself out upon us.[14]

This prayer, repeated three times in succession, is also optional, and may be used along with the first opening prayer to begin the Chaplet:

O Blood and Water, which gushed forth from the Heart of Jesus as a fountain of Mercy for us, I trust in You![14]

This prayer opens each decade of the Chaplet:

Eternal Father, I offer you the Body and Blood, Soul and Divinity of Your Dearly Beloved Son, Our Lord, Jesus Christ, in atonement for our sins and those of the whole world.[14]

For the sake of His sorrowful Passion

This prayer, repeated 10 times in succession, forms the body of each decade of the Chaplet:

For the sake of His sorrowful Passion, have mercy on us and on the whole world.[14]

This prayer, repeated three times in succession, concludes the Chaplet:

Holy God, Holy Mighty One, Holy Immortal One, have mercy on us and on the whole world.[14]

This prayer is optional, and may be used after the Holy God to end the Chaplet:

Eternal God, in whom mercy is endless and the treasury of compassion — inexhaustible, look kindly upon us and increase Your mercy in us, that in difficult moments we might not despair nor become despondent, but with great confidence submit ourselves to Your holy will, which is Love and Mercy itself.[14] 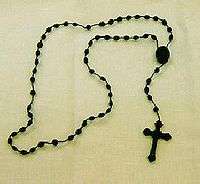 The chaplet is prayed on ordinary rosary beads, the same type used to pray the Dominican Rosary.[14][11] The structure of the Chaplet is as follows:[14][11]

The Chaplet is begun on the short strand of the rosary beads:

The praying of the decades then follows, repeating this cycle for each:

The chaplet may be repeated over a period of nine days as part of a novena. According to Faustina's Diary, Jesus himself in a vision asked that the Divine Mercy Novena be prayed as a preparation for the Feast of the Divine Mercy, celebrated each year on first Sunday after Easter.[15] The novena should begin on Good Friday. There is a prayer intention for specific group of people on each of the nine days. The last day intention, according to Jesus' message to St. Faustina, is the most difficult of all: to pray for the people who are lukewarm and indifferent.[16] Jesus described those people as follows:

These souls cause Me more suffering than any others; it was from such souls that My soul felt the most revulsion in the Garden of Olives. It was on their account that I said: "My Father, if it is possible, let this cup pass Me by." The last hope of salvation for them is to flee to My Mercy."[16]

The novena intentions for each day are: