Harvard College is the undergraduate liberal arts college of Harvard University. Founded in 1636 in Cambridge, Massachusetts, it is the oldest institution of higher learning in the United States[1] and one of the most prestigious in the world.[2]

The "New College" came into existence in 1636 by vote of the Great and General Court (colonial legislature, second oldest in British America) of the Massachusetts Bay Colony—though without a single building, instructor, or student. In 1638, the college became home for North America's first known printing press, carried by the ship John of London.[3][4] Three years later the college was renamed in honor of deceased Charlestown minister John Harvard (1607–1638) who had bequeathed to the school his entire library and half of his monetary estate.

Harvard's first instructor, schoolmaster Nathaniel Eaton (1610–1674), was also its first instructor to be dismissed—in 1639, for overstrict discipline.[5] The school's first students were graduated in 1642. In 1665, Caleb Cheeshahteaumuck, (c. 1643–1666), a native/indigenous American, "from the Wampanoag … did graduate from Harvard, the first Indian to do so in the colonial period."[6]

At the time of Harvard's founding (as today) the "colleges" of England's Oxford and Cambridge Universities were communities within the larger university, each an association of scholars (both established and aspiring) sharing room and board; Harvard's founders may have envisioned it as the first in a series of sibling colleges which, on the English model, would eventually constitute a university. Though no further "colleges" materialized in colonial times, nonetheless as Harvard began granting higher degrees in the late eighteenth century it was increasingly styled Harvard University—even as Harvard College (in keeping with emerging American usage of that word) was increasingly thought of as the university's undergraduate division in particular.

Though the Indian College was active from 1640 to no later than 1693, it was a minor addition not operated in federation with Harvard according to the English model.

Today Harvard College is responsible for undergraduate admissions, advising, housing, student life, and athletics – generally all undergraduate matters except instruction, which is the purview of Harvard University's Faculty of Arts and Sciences. The body known as The President and Fellows of Harvard College retains its traditional name despite having governance of the entire University. (Radcliffe College, established 1879,[7] originally paid Harvard faculty to repeat their lectures for women students. Since the 1970s, Harvard has been responsible for the above-listed matters for women, though women were still formally admitted to and graduated from Radcliffe until a final merger in 1999.)[8]

About 2,000 students are admitted each year, representing between five and ten percent of those applying; of those admitted approximately three-quarters choose to attend.[9][10][11][12] These figures make Harvard perhaps the most selective and sought-after college in the world. Very few transfers are accepted.[13]

Midway through the second year, most undergraduates join one of fifty standard fields of concentration (what most schools call academic majors); many also declare a secondary field (called minors elsewhere). Joint concentrations (combining the requirements of two standard concentrations) and special concentrations (of the student's own design) are also possible.

Most Harvard College concentrations lead to the Artium Baccalaureus (A.B.), normally completed in four years, though students leaving high school with substantial college-level coursework may finish in three. A smaller number receive the Scientiarum Baccalaureus (S.B.), normally requiring five years. There are also special degree programs, such as a five-year program leading to both a Harvard undergraduate degree and a Master of Arts from the New England Conservatory of Music.

Each student's exposure (via "Gen Ed") to a range of intellectual areas, while pursuing a chosen concentration in depth, fulfills the injunction of Harvard past-president Abbott Lawrence Lowell that liberal education should produce "men who know a little of everything and something well."[14]

In 2012, dozens of students were disciplined for cheating on a take-home exam in one course.[15] The university instituted an honor code beginning in the fall of 2015.[16][17]

The total annual cost of attendance, including tuition and room and board, for 2015–2016 was $60,659.[18] Under financial aid guidelines adopted in 2012, families with incomes below $65,000 no longer pay anything for their children to attend, including room and board. Families with incomes between $65,000 to $150,000 pay no more than 10% of their annual income.[19] In 2009, Harvard offered grants totaling $414 million across all eleven divisions; $340 million came from institutional funds, $35 million from federal support, and $39 million from other outside support. Grants total 88% of Harvard's aid for undergraduate students, with aid also provided by loans (8%) and work-study (4%).[18] 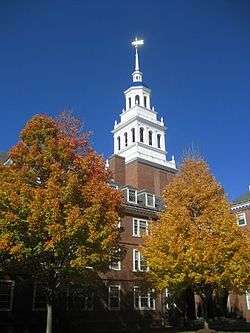 Nearly all undergraduates live on campus, for the first year in dormitories in or near Harvard Yard (see List of Harvard dormitories) and later in the upperclass Houses—administrative subdivisions of the College as well as living quarters, providing a sense of community in what might otherwise be a socially incohesive and administratively daunting university environment. Each house is presided over by a senior-faculty Faculty Dean, (until 2016 called the house's Master) while its Allston Burr Resident Dean (usually a junior faculty member) supervises undergraduates' day-to-day academic and disciplinary well-being. The Faculty Dean and Resident Dean are assisted by other members of the Senior Common Room—select graduate students (called tutors), faculty, and University officials brought into voluntary association with each house. Many tutors reside in the House, as do the Faculty Dean and Resident Dean. (Terms such as tutor, Senior Common Room and Junior Common Room—the House's undergraduate members—reflect a debt to the residential college systems at Oxford and Cambridge from which Harvard's system took inspiration.)[20]

The Houses were created by President Lowell in the 1930s to combat what he saw as pernicious social stratification engendered by the private, off-campus living arrangements of many undergraduates at that time. Lowell's solution was to provide every man—​​Harvard was male-only at the time—​​with on-campus accommodations throughout his time at the College; Lowell also saw great benefits flowing from other features of the House system, such as the relaxed discussions (academic or otherwise) which he hoped would take place among undergraduates and members of the Senior Common Room over meals in each House's dining hall.[21]

The way in which students come to live in particular Houses has changed greatly over time. Under the original "draft" system, Masters negotiated privately over the assignment of "rising sophomores" (that is, current freshmen, who will be sophomores in the coming academic year) considered most—or least—promising. From the 1960s to the mid-1990s, each student ranked the Houses according to personal preference, with an impersonal lottery resolving the oversubscription of more popular houses. Today, groups of one to eight freshmen form a block which is then assigned, essentially at random, to an upperclass house. 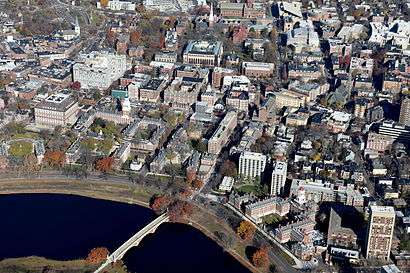 South of Harvard Yard, near the Charles River, are the nine River Houses:

The construction of the River houses was financed largely by a 1928 gift from Yale alumnus Edward Harkness who, frustrated in his attempts to initiate a similar project at his alma mater, eventually offered 11 million dollars to Harvard.[lower-alpha 1][25] Two of the new houses, Dunster and Lowell, were completed in 1930.[22]

Construction of the first River houses began in early 1929,[22] but the land on which they were built had been assembled decades before. After graduating Harvard in 1895, Edward Waldo Forbes (grandson of Ralph Waldo Emerson) found himself inspired by the Oxford and Cambridge systems during two years of study in England; on returning to the United States he set out to acquire such land between Harvard Yard and the Charles River as was not already owned by Harvard or some associated entity. By 1918 that ambition had been largely fulfilled and the assembled land transferred to Harvard.[26][27]

A thirteenth house, Dudley House, is nonresidential but fulfills, for some graduate students and the (very few) undergraduates living off campus, the administrative and social functions provided on-campus residents by the other twelve houses.

By the late 19th century critics of intercollegiate athletics, including Harvard president Charles William Eliot, believed that sports competition had become over-commercialized and took students away from their studies, and they called for reform and limitations on all sports. This opposition prompted Harvard's athletic committee to target 'minor' sports—basketball and hockey—for reform and regulation in order to deflect attention from the major sports—football, baseball, track, and crew. The committee made it difficult for the basketball team to operate by denying financial assistance and limiting the number of overnight away games in which the team could participate. Several losing seasons, negative attitudes toward the commercialization of intercollegiate sports, and the need for reform contributed to basketball's demise at Harvard in 1909.[29]

Today Harvard, one of the eight members of the Ivy League, claims to have the largest Division I intercollegiate athletics program, with 41 varsity teams and over 1,500 student-athletes.

Begun in 1852 the Harvard-Yale Regatta is the oldest intercollegiate athletic rivalry in the United States. Better known is the annual Harvard-Yale football game—"The Game", to insiders—first played in New Haven, Connecticut, in 1875, and now played on the Saturday before Thanksgiving, making it one of many significant games played on "Rivalry Day."

In an effort to marginalize organizations that "contribute to a social life and a student culture that for many on our campus is disempowering and exclusionary",[31] students entering in the fall of 2017 or later who join unrecognized single-sex organizations (such as single-sex "final clubs", fraternities, and sororities) will be barred from campus leadership positions such as team captaincies, and from receiving recommendation letters from Harvard requisite for certain scholarships and fellowships.[32]