Marshal of the Royal Air Force Charles Frederick Algernon Portal, 1st Viscount Portal of Hungerford, KG, GCB, OM, DSO & Bar, MC, DL (21 May 1893 – 22 April 1971) was a senior Royal Air Force officer. In the First World War he was a pilot, then a flight commander and then a squadron commander flying light bombers on the Western Front. In the early stages of the Second World War he was commander-in-chief of Bomber Command in which role he advocated strategic area bombing against German industrial areas, the same sort of targets that the Luftwaffe was already targeting in the United Kingdom. He was then Chief of the Air Staff during the rest of the War and in that role he fended off an attempt by the Royal Navy to take over RAF Coastal Command as well as an attempt by the British Army to establish their own Army Air Arm. He was also an advocate of the need for a renewed strategic bombing offensive. In retirement Portal was chairman of British Aluminium and unsuccessfully fought in the "Aluminium War" against a hostile takeover bid by Sir Ivan Stedeford's Tube Investments; he then became chairman of the British Aircraft Corporation.

Portal was born at Eddington House, Hungerford, Berkshire, the son of Edward Robert Portal and his wife Ellinor Kate (née Hill).[1] His younger brother Admiral Sir Reginald Portal (1894–1983) joined the Royal Navy and also had a distinguished career.[1] The Portals had Huguenot origins, having arrived in England in the 17th century.[2] Charles Portal, or "Peter" as he was nicknamed, was educated at Winchester College and Christ Church, Oxford.[1] Portal had intended to become a barrister but he did not finish his degree and he left undergraduate life to enlist as a private soldier in 1914.[3]

At the beginning of the First World War, Portal joined the British Army and served as a dispatch rider in the motorcycle section of the Royal Engineers on the Western Front.[4] Portal was made a corporal very soon after joining the Army and he was commissioned as a second lieutenant only weeks later.[3] Around the same time, Portal was commended in Sir John French's first despatch of September 1914.[1] In December 1914, Portal was given command of all riders in the 1st Corps Headquarters Signals Company.[1]

In August 1919 Portal was appointed to a permanent commission in the Royal Air Force in the rank of major (shortly afterwards redesignated as a squadron leader).[11] He became a chief flying instructor at the Royal Air Force College Cranwell in November 1919 and then attended RAF Staff College in 1922, before joining the air staff conducting flying operations in the home sector in April 1923.[4] Promoted to wing commander on 1 July 1925,[12] he attended the senior officers' war course at the Royal Naval College, Greenwich, in 1926 before taking over No. 7 Squadron flying Vickers Virginia bombers from RAF Worthy Down in March 1927[4] and concentrated on improving bombing accuracy.[1]

Portal attended the Imperial Defence College in 1929 and became Deputy Director of Plans in the Directorate of Operations & Intelligence at the Air Ministry in December 1930.[4] Promoted to group captain on 1 July 1931,[13] he was appointed commander of British forces in Aden in February 1934,[4] in which role he tried to control the local tribesmen by use of an air blockade.[1] Promoted to air commodore on 1 January 1935,[14] he joined the Directing Staff at the Imperial Defence College in January 1936.[4] Portal was promoted to air vice marshal on 1 July 1937[15] before being appointed Director of Organization at the Air Ministry on 1 September 1937.[16] 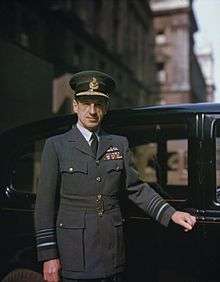 Air Chief Marshal Portal standing by a staff car outside Air Ministry buildings in London, during the Second World War

On 25 October 1940, Portal was appointed as Chief of the Air Staff with the temporary rank of air chief marshal[21] (made permanent in April 1942).[22] He continued in this capacity for the remainder of the war.[4] The first issue he had to resolve was an attempt by the Royal Navy to take over RAF Coastal Command as well as an attempt by the British Army to establish their own Army Air Arm.[23] Portal successfully persuaded both the Army and the Navy that the RAF could adequately look after their needs.[20] The second issue Portal had to resolve was the need for a renewed strategic bombing offensive.[20] In August 1941 he received a report on the relative inefficiency of RAF daytime raids and proposals for area bombing by night: to implement the proposals he determined that a new leader was required and replaced the chief of bomber command, Air Chief Marshal Richard Peirse, with Arthur Harris.[23] He was advanced to Knight Grand Cross of the Order of the Bath in the 1942 Birthday Honours.[24] 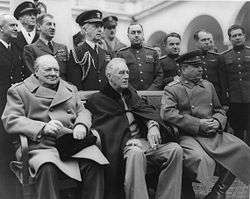 The Yalta Conference. Portal is shown standing behind Churchill.

Portal accompanied Churchill to all the great conferences and made a good impression on Americans.[1] In January 1943, at the Casablanca Conference, the Combined Chiefs of Staff selected him to coordinate the bomber forces of both the United States and Britain in a combined bomber offensive over Germany.[1] The forces were transferred to U.S. General Dwight D. Eisenhower for the duration of Operation Overlord;[1] but when their control reverted to the Combined Chiefs, Portal still advocated area bombing of German cities instead of specific targets, such as Axis oil production facilities.[25] He was promoted to Marshal of the Royal Air Force on 1 January 1944.[26]

In early 1944, Portal's view of strategic bombing changed; he felt that bombers could also play a more auxiliary role in the allied offensive. (Much of what is known about Portal's thinking is based on memoranda he wrote.) He argued for the new approach on the basis of the huge increase in the size of the bomber force, which would carry out not just precision bombing but also indiscriminate area bombing by night of all German cities with populations exceeding 100,000. Portal thought that the resulting damage to the German war effort and civilian morale would lead to victory within six months. A second memorandum in 1945 made a similar argument.[25]

In March 1945, Churchill gave the final order to stop Portal's strategy of area bombing, after the firestorm of Dresden a few weeks earlier. Churchill subsequently distanced himself from the bombing writing that "the destruction of Dresden remains a serious query against the conduct of Allied Bombing".[27]

From 1946 to 1951, Portal was Controller of Production (Atomic Energy) at the Ministry of Supply.[34] Christopher Hinton, responsible for the production of fissile material, said later, "I cannot remember that he ever did anything that helped us."[35] He attended the funeral of King George VI in February 1952[36] and the coronation of Queen Elizabeth II in June 1953.[37]

Portal was elected Chairman of British Aluminium and in 1958/1959 he fought in the City of London's "Aluminium War" against a hostile takeover bid by Sir Ivan Stedeford, Chairman and Chief Executive of Tube Investments. T.I. along with its ally Reynolds Metals of the US, won the takeover battle, and in the process, rewrote the way the City of London conducted its business in relation to shareholders and investors. Stedeford replaced Portal as Chairman of British Aluminium. In 1960 Portal was elected chairman of the British Aircraft Corporation.[38] Portal died from cancer at his home at West Ashling near Chichester on 22 April 1971.[1]

In July 1919, Portal married Joan Margaret Welby (1898–1996); they had a son (who died at birth) and two daughters.[1] The viscountcy died with him but he was succeeded in the barony according to the special remainder by his elder daughter, Rosemary Ann, who died in 1990.[1]