Air chief marshal (Air Chf Mshl or ACM) is a four-star air officer rank which originated in and continues to be used by the Royal Air Force, where it is the most senior peacetime air force rank.[1][2] The rank is also used by the air forces of many countries that have historical British influence and it is sometimes used as the English translation of an equivalent rank in countries which have a non-English air force-specific rank structure.

Royal Air Force use and history

Prior to the adoption of RAF-specific rank titles in 1919, it was suggested that the RAF might use the Royal Navy's officer ranks, with the word "air" inserted before the naval rank title. For example, the rank that later became air chief marshal would have been air admiral. The Admiralty objected to any use of their rank titles, including this modified form, and so an alternative proposal was put forward: air-officer ranks would be based on the term "ardian", which was derived from a combination of the Gaelic words for "chief" (ard) and "bird" (eun), with the unmodified word "ardian" being used specifically for the equivalent to full admiral and general. However, air chief marshal was preferred and was adopted on 1 August 1919. The rank was first used on 1 April 1922 with the promotion of Sir Hugh Trenchard.[5] With Trenchard's promotion to marshal of the RAF on 1 January 1927, no officer held the rank until Sir John Salmond was promoted on 1 January 1929. It has been used continuously ever since.

In the RAF, the rank of air chief marshal is held by the serving Chief of the Air Staff (currently Sir Stephen Hillier). Additionally, RAF officers appointed to British four-star rotational posts hold the rank of air chief marshal and currently Sir Stuart Peach, the Chief of the Defence Staff, is the only RAF officer in such a post. Throughout the history of the RAF, 139 RAF officers have held the rank and it has also been awarded in an honorary capacity to senior members of the British Royal Family and allied foreign monarchs.

Although no serving RAF officer has been promoted to marshal of the Royal Air Force since the British defence cuts of the 1990s, British air chief marshals are not the most senior officers in the RAF as several officers continue to retain the RAF's highest rank. Additionally, Lord Stirrup was granted an honorary promotion to marshal of the Royal Air Force in 2014. The marshals are still to be found on the RAF's active list even though they have for all practical purposes retired.

The rank of air chief marshal is also sometimes used as the English translation of an equivalent rank in countries which have a non-English air force-specific rank structure. In such situations, it is sometimes the case that the non-English rank might also be translated as "general". Nonetheless, it is commonly found in English translations relating to officers in the Egyptian Air Force,[8] Hellenic Air Force, Indonesian Air Force (Indonesian: marsekal - literally just "marshal"), and Royal Thai Air Force (Thai: Phon Akat Ek).

With the establishment of the Australian Air Board on 9 November 1920, Australian Air Corps officers dropped their army ranks in favour of those based on the Royal Air Force. However, it was not until 1965 when Sir Frederick Scherger became Chairman of the Australian Chiefs of Staff Committee, and was promoted to air chief marshal that an RAAF officer attained the rank. Throughout the history of the RAAF, only four of its officers have held the rank. Apart from Scherger, they are Sir Neville McNamara (promoted 1982), Angus Houston (promoted 2005) and Mark Binskin (promoted 2014). Both McNamara and Houston are former Australian Defence Force chiefs; as of 2014, Binskin is the current chief of the Australian Defence Force. 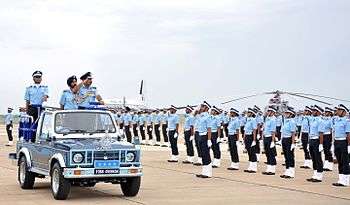 In March 1976, as part of a Pakistani Defence Ministry reorganization, the post of Chief of Air Staff, the head of the Pakistan Air Force, was upgraded from air marshal to air chief marshal rank. Zulfiqar Ali Khan was the first to hold the rank and in total from 1976 to 2012 there have been 13 Pakistani air chiefs who have held air chief marshal rank. To date all Pakistani air chief marshals have been members of the Joint Chiefs of Staff Committee. However, only Air Chief Marshal Farooq Feroze Khan has served as Chairman of the Joint Chiefs of Staff Committee, the supreme commandant of Pakistan Armed Forces. Air Chief Marshal Tahir Rafique Butt assumed the post of Chief of Air Staff in March 2012. The current Air Chief Marshal is Sohail Aman

Originally, a Pakistani air chief marshal's rank insignia was essentially the same as the RAF insignia. In 2006 the Pakistan Air Force changed the rank insignia for its officers, abandoning the ring insignia in favour of a Turkish Army-style featuring four stars and a crossed swords and laurel device.