Air commodore (abbreviated as Air Cdre in the RAF, IAF and PAF; AIRCDRE in the RNZAF and RAAF) is a one-star rank and the most junior general rank of the air-officer which originated in and continues to be used by the Royal Air Force.[1] The rank is also used by the air forces of many countries which have historical British influence such as Bangladesh, and it is sometimes used as the English translation of an equivalent rank in countries which have a non-English air force-specific rank structure. The name of the rank is always the full phrase and is never shortened to Commodore, which is a rank in various naval forces.

Air commodore is a one-star rank and the most junior air officer rank, being immediately senior to group captain and immediately subordinate to air vice-marshal. It has a NATO ranking code of OF-6 and is equivalent to a commodore in the Royal Navy or a brigadier in the British Army or the Royal Marines. Unlike these two ranks, however, it has always been a substantive rank. Additionally, air commodores have always been considered to be air officers whilst Royal Navy commodores have not since the Napoleonic Wars been classified as officers of flag rank, and British Army brigadiers have not been considered to be general officers since 1922 when they ceased to be titled as brigadier-generals. In other NATO forces, such as the United States Armed Forces and the Canadian Armed Forces, the equivalent one-star rank is brigadier general.

Royal Air Force use and history

On 1 April 1918, the newly created RAF adopted its officer rank titles from the British Army, with officers at what is now air commodore holding the rank of brigadier-general. In response to the proposal that the RAF should use its own rank titles, it was suggested that the RAF might use the Royal Navy's officer ranks, with the word "air" inserted before the naval rank title. Although the Admiralty objected to this simple modification of their rank titles, it was agreed that the RAF might base many of its officer rank titles on Navy officer ranks with differing pre-modifying terms. It was also suggested that air-officer ranks could be based on the term "ardian", which was derived from a combination of the Gaelic words for "chief" (ard) and "bird" (eun), with the term "fourth ardian" or "flight ardian" being used for the equivalent to brigadier-general and commodore. However, the rank title based on the Navy rank was preferred and air commodore was adopted on 1 August 1919.

The rank insignia is a light-blue band on a broad black band worn on both the lower sleeves of the tunic or on the shoulders of the flying suit or the casual uniform. On the mess uniform, air commodores wear a broad gold ring on both lower sleeves.

The command flag of an air commodore has one narrow red band running through the centre and is rectangular with a cut-away section giving it two tails. It is the only RAF command flag of this shape and it is similar in shape to that of a Royal Navy commodore's broad pennant. The vehicle star plate for an air commodore depicts a single white star (air commodore is equivalent to a one-star rank) on an air force blue background. RAF air commodores are classed as air officers and as such have two rows of gold oak leaves on the peak of their service dress hats. 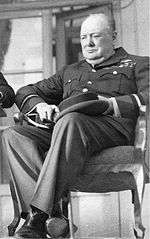 Churchill in his air commodore's uniform at the 1943 Tehran Conference

Serving officers, such as Prince Harry, may be granted an equivalent appointment to the honorary rank. In such cases the individual is made an honorary air commandant and they retain their regular rank.[3] 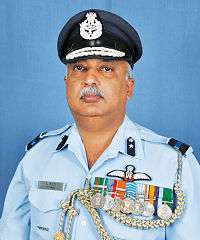 In non-Commonwealth countries, it is also used in the Egyptian Air Force, Hellenic Air Force, Royal Air Force of Oman, the Royal Thai Air Force and the Air Force of Zimbabwe. In the Indonesian Air Force the equivalent rank is Marsekal Pertama (literally "First Marshal") which is usually translated as air commodore in English. The rank Komodor Udara (literally means Air Commodore) was used until 1973. The Hellenic Air Force uses the rank of taxiarchos tis aeroporias (literally meaning he who orders the air force or less literally as air force brigadier) which is normally rendered as air commodore in English and was introduced in the early 1940s when the Greek armed forces were reconstituted along British lines while in exile in the Middle East. The Royal Netherlands Air Force's equivalent rank is commodore which has essentially the same rank insignia. The Chilean Air Force equivalent rank is comodoro which has same rank insignia on the sleeve.

The Royal Canadian Air Force used the rank until the unification of the Canadian Forces in 1968, when army-type rank titles were adopted. An air commodore then became a brigadier-general (following the US Armed Forces title, rather than the British brigadier, which had been held by equivalent officers in the former Canadian Army). In official French Canadian usage, the rank title was commodore de l'air. The position of honorary air commodore still exists in the Royal Canadian Air Cadets.