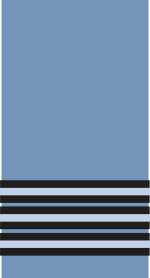 Wing commander (Wg Cdr in the RAF, the IAF, and the PAF, WGCDR in the RNZAF and RAAF, formerly sometimes W/C in all services) is a senior commissioned rank in the Royal Air Force[1] and the air forces of many countries which have historical British influence, including many Commonwealth countries but not including Canada and South Africa. It is sometimes used as the English translation of an equivalent rank in countries which have a non-English air force-specific rank structure. It ranks immediately above squadron leader and immediately below group captain. It has a NATO ranking code of OF-4, and is equivalent to a commander in the Royal Navy and a lieutenant colonel in the British Army, Royal Marines and the US Army and United States US Marine Corps.

On 1 April 1918, the newly created RAF adopted its officer rank titles from the British Army, with Royal Naval Air Service commanders (titled as wing commanders) and Royal Flying Corps lieutenant colonels becoming lieutenant colonels in the RAF. In response to the proposal that the RAF should use its own rank titles, it was suggested that the RAF might use the Royal Navy's officer ranks, with the word "air" inserted before the naval rank title. For example, the rank that later became wing commander would have been air commander.

Although the Admiralty objected to this simple modification of their rank titles, it was agreed that the RAF might base many of its officer rank titles on naval officer ranks with differing pre-modifying terms. It was also suggested that RAF lieutenant colonels might be entitled reeves or wing-leaders. However, the rank title wing commander was chosen as wings were typically commanded by RAF lieutenant colonels and the term wing commander had been used in the Royal Naval Air Service. The rank of wing commander has been used continuously since 1 August 1919.

The rank insignia is based on the three gold bands of commanders in the Royal Navy and consists of three narrow light blue bands over slightly wider black bands. This is worn on both the lower sleeves of the tunic or on the shoulder of the flying suit or the casual uniform.

The Royal Canadian Air Force (RCAF) used the rank until the unification of the Canadian Forces (CF) in 1968, when army-type rank titles were adopted. A Canadian wing commander then became a lieutenant colonel. In official French Canadian usage, a wing commander's rank title was lieutenant-colonel d'aviation. The rank of wing commander continues to be used as a cadet rank at the Royal Military College of Canada.

In the 1990s, the Canadian Forces Air Command (the post-1968 RCAF) altered the structure of those bases under its control, redesignating them as wings. The commander of such an establishment was re-designated as the "wing commander" (or "Wg Comd"). Like the United States Air Force usage, the term "wing commander" (as used in the modern Canadian Forces) is an appointment, not a rank. A wing commander usually holds the rank of colonel.

In the United States Air Force (USAF) wing commander is a duty title, not a rank. The equivalent USAF rank is lieutenant colonel who typically has command of a squadron. Because USAF wings are larger formations than RAF wings, the commander of a wing must hold at least the rank of colonel, and is typically a colonel or a brigadier general. The one exception to this is the commander of the 59th Medical Wing (Wilford Hall Medical Center) who is customarily a major general.

The Civil Air Patrol, the volunteer auxiliary of the USAF, follows the USAF rank structure. The CAP divides the nation into 52 wings (each corresponding to a state, territory, and District of Columbia). Each wing is headed by a CAP colonel, who holds the position of wing commander.