Charlestown is a town in Sullivan County, New Hampshire, United States. The population was 5,114 at the 2010 census.[1] The town is home to Hubbard State Forest and the headquarters of the Student Conservation Association.

The primary settlement in town, where 1,152 people resided at the 2010 census,[2] is defined as the Charlestown census-designated place (CDP) and is located along New Hampshire Route 12. The town also includes the villages of North Charlestown, South Charlestown and Hemlock Center.[3]

The area was first granted on 31 December 1735[4] by colonial governor Jonathan Belcher of Massachusetts as "Plantation No. 4", the fourth in a line of forts on the Connecticut River border established as trading posts. Settled in 1740, Number Four was the northernmost township, and its 1744 log fort became a strategic military site throughout the French and Indian Wars. On the evening of May 2, 1746, Seth Putnam joined Major Josiah Willard and several soldiers as they escorted women to milk the cows. As they approached the booth, Natives hiding in the bushes opened fire, killing Putnam. This was the first casualty in the hostilities that would lead to the French and Indian War.[5] In 1747 the fort was besieged for three days by a force of 400 French and Native people. Captain Phineas Stevens and 31 soldiers, stationed at the fort, repelled the attack. Their success became well-known, and the fort was never attacked again.

On July 2, 1753,[4] the town was regranted as "Charlestown" by Governor Benning Wentworth, after Admiral Charles Knowles of the Royal Navy, then governor of Jamaica. Admiral Knowles, in port at Boston during the 1747 siege, sent Captain Stevens a sword to acknowledge his valor. The town responded by naming itself in his honor.

Early in the morning of August 30, 1754, Susannah Willard Johnson along with her husband, her three children, her sister and two neighbors, Peter Labarree and Ebenezer Farnsworth, were captured by Abenaki people, marched to Montreal and incarcerated. Eventually they would all escape or be released and return home.

In 1781, Charlestown briefly joined Vermont because of dissatisfaction with treatment by the New Hampshire government. Returning at the insistence of George Washington, it was incorporated in 1783.[6]

The community developed into a center for law and lawyers, second regionally only to Boston. Its prosperity would be expressed in fine architecture. Sixty-three buildings on Charlestown's Main Street are now listed on the National Register of Historic Places. They include the Gothic Revival South Parish Church erected by master-builder Stephen Hassam in 1842, St. Luke's Church designed by Richard Upjohn in 1863, and the Italianate Town Hall designed in 1872 by Edward Dow, New Hampshire's most prominent architect after the Civil War. Dow also designed Thompson Hall, centerpiece of the University of New Hampshire.

In 1874, the Sullivan Railroad passed through the western border of Charlestown.[4] The tracks are now part of the New England Central Railroad.

A reproduction of the Fort at Number 4 is now a historical site, where military reenactments and musters occur frequently throughout the summer months. Tours are offered of its stockaded parade ground and pioneer-style houses.

In the Connecticut River in the 1800s were three islands within the limits of the town. Sartwell's Island, the largest, containing 10 acres (4.0 ha), was under a high cultivation in 1874. The others contained about 6 acres (2.4 ha) each.[4] None show on maps today, and were presumably inundated by the power dam built downstream at Bellows Falls.

Charlestown is served by New Hampshire Routes 11, 12 and 12A. Routes 11 and 12 lead north from the town center 11 miles (18 km) to downtown Claremont. Route 12 leads south 7 miles (11 km) to North Walpole, adjacent to Bellows Falls, Vermont, and 28 miles (45 km) to Keene. Route 11 leads northwest from the center of Charlestown to the Cheshire Bridge (the old toll bridge) across the Connecticut River, after which it becomes Vermont Route 11 and provides access to Interstate 91 and U.S. Route 5 in Vermont.

The Amtrak Vermonter passenger rail line runs through Charlestown along the Connecticut River but does not stop in town. The closest stations are Bellows Falls to the south and Claremont to the north.

There were 1,920 households out of which 30.5% had children under the age of 18 living with them, 55.6% were married couples living together, 9.3% have a woman whose husband does not live with her, and 30.6% were non-families. 23.9% of all households were made up of individuals and 9.9% had someone living alone who was 65 years of age or older. The average household size was 2.46 and the average family size was 2.90.

There were 468 households out of which 31.2% had children under the age of 18 living with them, 48.1% were married couples living together, 12.0% have a woman whose husband does not live with her, and 35.5% were non-families. 28.4% of all households were made up of individuals and 11.3% had someone living alone who was 65 years of age or older. The average household size was 2.42 and the average family size was 2.87. 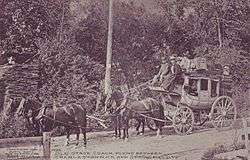 Old stage coach in 1907, plying between Charlestown and Springfield, Vermont