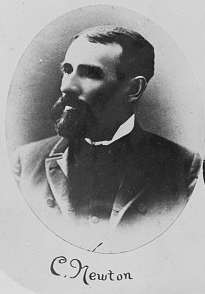 Born in Greensburg, St. Helena Parish, Louisiana, Newton attended private schools in Bastrop, Louisiana, and the Louisiana State University, then at Alexandria, Louisiana. He taught school. He studied law. He was admitted to the bar in 1870 and commenced practice in Bastrop. He served as a member of the State senate 1879-1883. He declined a judgeship in 1885.

Newton was elected as a Democrat to the Fiftieth Congress (March 4, 1887 – March 3, 1889). He was an unsuccessful candidate for renomination in 1888. He served as delegate to the Democratic National Convention in 1888.

He was interred in the New Cemetery, Bastrop.