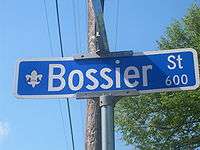 Bossier Street in Natchitoches is named for Pierre Bossier.

Pierre Evariste Jean-Baptiste Bossier (March 22, 1797 – April 24, 1844) was a soldier, planter, and politician born in Natchitoches, Louisiana. He is the namesake of Bossier Parish (pronounced BO zhure), which includes the parish seat of Benton and the larger Bossier City, located east of the Red River across from Shreveport in northwestern Louisiana. The Pierre Bossier Mall shopping center in Bossier City also bears his name.

Bossier was the son of François Paul Bossier and the former Catherine Pelagie Lambre. He received a classical education privately. Bossier was a cotton and sugar planter on his plantation, Live Oaks, on the Cane River, formerly a segment of the Red River, in Natchitoches Parish. He was also a general in the state militia.

Having entered politics as a Democrat, Bossier was a member of the Louisiana State Senate from 1833 to 1843. He served in the U.S. House of Representatives in the newly established Fourth Congressional District in north Louisiana from March 4, 1843, until his death in office a year later in Washington, D.C.

In the summer of 1839, a political argument between a prominent Whig, General F. Gaiennie, and State Representative General P. E. Bossier, a Democrat, escalated to open incriminations in the local newspaper. Bossier demanded a duel and Gaiennie accepted choosing rifles as the most deadly weapon available. The duel took place the following Autumn on the grounds of Cherokee Plantation in Natchitoches Parish.

Bossier is interred at the Catholic Cemetery in Natchitoches.