This article is about the politician. For the Texas musician, see Bob Livingston (musician). For other people with the same name, see Robert Livingston (disambiguation).

Robert Linlithgow "Bob" Livingston Jr. (born April 30, 1943) is a Washington, D.C.-based lobbyist and a former Republican U.S. Representative from Louisiana. He was Chairman of the Appropriations Committee from 1995–1999, and he was chosen as Newt Gingrich's successor as Speaker of the United States House of Representatives late in 1998, but instead retired over concerns his extramarital affair would inhibit his efforts to impeach President Bill Clinton.

Livingston was born in Colorado Springs, Colorado. He is a descendant of the Livingston family of New York, whose members include Philip, a signer of the United States Declaration of Independence; Chancellor Robert R. Livingston, a co-author of the Declaration and author of the Louisiana Purchase; his younger brother, Edward, Aide de Camp and later Secretary of State to President Andrew Jackson, and who had earlier in his career held the same Congressional seat (La-1) as Bob Livingston.[1] Livingston is a direct descendant of Henry Livingston, who was probably the (then anonymous) author of the poem, The Night Before Christmas,and French Admiral François Joseph Paul de Grasse, who together with General George Washington cornered and defeated British General Cornwallis in the Siege of Yorktown, Virginia, thereby concluding the American Revolutionary War. De Grasse's daughter, Sylvie, married Henry Walter Livingston, ancestors of the Congressman.

Livingston was married in 1965 to the former Bonnie Robichaux (also born 1943), a native of Raceland in Lafourche Parish. Bonnie's grandfather, Alcide Robichaux, served in the Louisiana State Senate, and her uncle, Philip Robichaux, was Lafourche Parish coroner for decades. Livingston's father, a Roman Catholic, and his mother, an Episcopalian, were divorced when Livingston and his sister were quite young. Raised first as Roman Catholic and later as an Episcopalian, he returned to his wife's religion Roman Catholicism in later years. The Livingstons have three biological sons, Robert, Richard and David, and an adopted daughter, SuShan a/k/a Susie. They have nine (9) grandchildren. In July 2006, their son Richard was electrocuted by a live wire while trimming a tree damaged by Hurricane Katrina in New Orleans.[2]

Graduating from Tulane University Law School in 1968, Livingston joined the law practice of David C. Treen, who would become Louisiana's first Republican congressman and governor since Reconstruction. Treen had been an active Republican in the days when the party barely existed in Louisiana, and this connection allowed Livingston to make valuable contacts in GOP circles. He was a delegate to all Republican conventions between 1976 and 2000. Between 1970 and 1976, Livingston worked for U.S. Attorney for the Louisiana's Eastern District Gerald J. Gallinghouse, Orleans Parish District Attorney Harry Connick Sr., and Louisiana State Attorney General, William J. "Billy" Guste Jr. 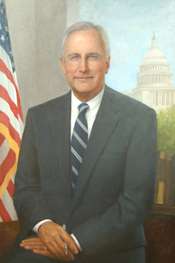 Livingston resigned his position as head of the state attorney general's organized crime unit in 1976 when he won the Republican nomination for Louisiana's 1st Congressional District, encompassing roughly half of New Orleans and many of its surrounding suburbs. The seat, which had been trending Republican for some time at the national level, had opened up when 36-year incumbent Democrat and former House Armed Services Committee chairman F. Edward Hébert retired. Livingston narrowly lost to one-term state legislator Richard Tonry. Livingston was denied victory when a third-party candidate, former Sixth District Congressman John Rarick, filed as an independent in the last days of the race. Rarick, who had been one of the most conservative Democrats in Congress during his tenure, siphoned off roughly 9% of the votes cast, enabling Tonry to win with a plurality.

Allegations, however, surfaced of "tombstone" votes for Tonry in both the primary and general election. Tonry was forced to resign in May 1977 and run again in the special election for his seat. However, he lost the Democratic nomination in August to State Representative Ron Faucheux. In addition, Faucheux also faced Sanford Krasnoff, an independent challenge from the left. Livingston benefitted by the split in liberal ranks, but still took 51% of the total vote cast and became the first Republican to represent a significant portion of New Orleans in Congress since Reconstruction. Livingston prevailed with 56,121 votes to Faucheux's 40,862, and Krasnoff's 12,665.[3][4]

Livingston was aided by a cadre of dedicated Republican volunteers, including the newly installed National Committeewoman Virginia Martinez of Kenner.[5] In 1978, Livingston won a full term with 86 percent of the vote. He was reelected eleven times, dropping below 80 percent of the vote only once, in 1992. He was completely unopposed in 1986, 1996 and 1998. His district became even more Republican after the 1980 census, when most of the district's share of New Orleans was shifted to the 2nd District. It was replaced with some heavily Republican territory in Jefferson Parish. After the 1990 census, Livingston's district gained conservative Washington and Tangipahoa parishes from the 6th district while relinquishing equally conservative Saint Bernard and Plaquemines to the 3rd district.

Although well known in Louisiana, Livingston was a relatively low-key congressman for his first eighteen years in Washington. However, early in his career, he landed a spot on the powerful Appropriations Committee. This, together with his conservative stances on most issues, made him popular with his constituents, most of whom had never been previously represented by a Republican.

Livingston first came to national attention in 1995, when he was named chairman of the Appropriations Committee after the Republican takeover of the House. This instantly made him one of the most powerful members of Congress. During one committee session, he brandished an alligator skinning knife, a Bouie knife, and a machete to demonstrate his seriousness as a budget-cutter.

During the Monica Lewinsky scandals, Livingston was one of many Republicans who demanded President Bill Clinton's resignation, and later impeachment, for perjury. After Newt Gingrich resigned as Speaker in part because of Republican losses in the 1998 elections, majority leader Dick Armey and majority whip Tom DeLay had opted not to contest the Speaker's chair. Livingston subsequently announced that he was not only running for Speaker, but had lined up enough support to win. He was nominated as the Republican candidate for Speaker without opposition. As the GOP had retained a narrow majority in the House, this effectively made him Speaker-elect. Although the Speaker is formally elected by the entire House, in practice the majority party's candidate is all but assured of winning that vote.

During debate over the impeachment of Bill Clinton on December 19, 1998, Hustler Magazine publisher Larry Flynt offered one million dollars for each unflattering sexual story about Republican members of congress. After one such story was made public about him by Flynt, Livingston acknowledged that he had had an affair and withdrew his candidacy for Speaker. He challenged President Bill Clinton to resign as well.[6] Livingston then announced he would vacate his House seat in May 1999.[7] His leaving office came despite support from Minority Leader Dick Gephardt of Missouri that the Democrats could work with Livingston and not make a continued issue of Livingston's affair. Livingston said that had he become Speaker, it would have been more difficult for the Republicans to carry out Clinton's impeachment and trial.[8] Thus, he removed himself from contention.

Livingston was succeeded by David Vitter – who later became the first popularly elected Republican U.S. senator from Louisiana and subsequently admitted to having been involved in a prostitution ring run by Deborah Jeane Palfrey. The First District is currently represented by Republican Steve Scalise of Metairie, Louisiana, who faced controversy in 2014 for delivering a speech to white supremacist David Duke's European-American Unity and Rights Organization (EURO).

In 1985, Livingston had called for the resignation of Governor Edwin Edwards, who faced indictment and trial on charges of racketeering and fraud. "He shouldn't continue to drag the image of our state down with his legal problems," Livingston said of Edwards.[9] Two years later Livingston unsuccessfully challenged Edwards for reelection, when the gubernatorial victory went to U.S. Representative Buddy Roemer.

In 1987, Livingston ran for governor, having declared, "You can lay our problems at the hands of politicians." He questioned the state's poor performance regarding school drop-outs, unemployment, and credit rating. He even noted that Louisiana had a high number of cancer patients, a factor often attributed to environmental hazards. Livingston continued:

Despite polls which had generally showed that Livingston would face the incumbent governor, Edwin Edwards, in a second round of balloting, Livingston finished third of nine candidates. Because of a last-week surge to his fellow U.S. representative, Buddy Roemer of Louisiana's 4th congressional district, Livingston fell ten points short of a runoff berth. Roemer was slated into a runoff election officially the Louisiana general election. Two other major candidates finished behind Livingston: then Democratic, later Republican, Representative Billy Tauzin of Louisiana's 3rd congressional district and outgoing Secretary of State James H. "Jim" Brown.

After the primary, Livingston quickly endorsed his House colleague Roemer, then a Democrat, but the runoff election was canceled because Edwards conceded the race to Roemer. It was said that Edwards had wanted to face Livingston in a general election, and had that scenario developed he would have remained around for the second balloting. Instead Edwards pulled out of the second round of balloting to prevent Roemer from consolidating majority support.

Despite his showing in the gubernatorial race, Livingston remained popular in his district and went on to win easy re-elections as he moved up the leadership ladder in the House.

Soon after retiring from public life he founded The Livingston Group, a lobbying group in Washington DC. Some of their noted accomplishments include Congressional approval of a Morocco–United States Free Trade Agreement and Congressional normalization of relations between the US and Libya following the Libyan abdication of nuclear technology and settlement of claims by family members for people killed in Pan Am Flight 103 and other violent incidents in the 1980s.

The Livingston Group's clients include "the Cities of New Orleans and Baton Rouge, Northrop Grumman, the New Orleans Business Council, Rolls-Royce, and Verizon."[11] Another important client was the Republic of Turkey, on whose behalf the Group lobbied to maintain and improve US relations as they pertained to international and historical issues affecting the Republic of Turkey. Critics contend that this lobbying was a form of genocide denial, as Turkey does not recognize the slaughter of up to 1.5 million Armenians as a genocide, and does not want the American Government to recognize these events as genocide either.[12][13]

The Livingston Group has also represented the government of Egypt.[11] Acting as lobbyist for Egypt Livingston "helped stall a Senate bill that called on Egypt to curtail human rights abuses" in 2010.[14] His stated role is to enhance relations between the United States and the Republic of Egypt, which he perceives as critical to a resolution of tension in the Middle East.

In 2003, Livingston was inducted into the Louisiana Political Museum and Hall of Fame in Winnfield.

Livingston testified in the 2009 trial of Mose Jefferson, who was convicted on four counts related to bribery.[15]

From 2011 to 2014, Livingston became Treasurer of the Louisiana Republican Party.[11] "Livingston said taking the fundraising assignment for the Louisiana GOP would not in any way undermine the work of The Livingston Group."[11]

Livingston is also a member of the board of the International Foundation for Electoral Systems, a non-profit involved in international elections,[16] and he is a Knight of the Sovereign Military Order of Malta.