Thomas Overton Brooks (December 21, 1897 – September 16, 1961)[1] was a Democratic U.S. representative from the Shreveport-based Fourth Congressional District of northwestern Louisiana, having served for a quarter century beginning on January 3, 1937. Brooks was a nephew of U.S. Senator John Holmes Overton and a great-grandson of Walter Hampden Overton. At the time of his death, he was chairman of the House Science and Astronautics Committee.

Brooks was born in Baton Rouge to Claude M. Brooks and the former Penelope Overton. He graduated from public schools. Brooks served overseas during World War I as an enlisted man in the Sixth Field Artillery, First Division, Regular Army, 1918–1919.

After the war, he obtained a law degree in 1923 from Louisiana State University Law Center in Baton Rouge. He was then admitted to the bar and began his practice in Shreveport, the seat of Caddo Parish in the northwestern corner of his state.

On June 1, 1932, Brooks married the former Mollie Meriwether of Shreveport, a daughter of Minor Meriwether and the former Anne Finley McNutt. They had one child, Laura Anne.

Brooks succeeded John Nicholas Sandlin, Sr., a fellow Democrat from Minden, the seat of Webster Parish. Rather than seek reelection to the House, Sandlin ran unsuccessfully in the 1936 Democratic primary against Allen J. Ellender for an open seat in the U.S. Senate. Brooks, who ran as the "Long-Allen candidate", defeated an intraparty rival for the U.S. House, Wilburn V. Lunn.[2]

In 1940, newly elected Governor Sam Houston Jones urged that Brooks be defeated in the Democratic congressional primary, but Brooks won his third term that year in a runoff contest.[3] Brooks faced a showdown with Henry Andrew O'Neal (1879-1970), a Shreveport insurance agent originally from Linden in Cass County, Texas.[4] In the primary election, state Representative Wellborn Jack of Caddo Parish and J. Frank Colbert, the former mayor of Minden, were eliminated from further consideration.[5] In the second round of balloting, Brooks received 19,375 votes (55.6 percent) to O'Neal's 15,450 (44.4 percent).[6]

In 1950, Brooks overwhelmed[7] the conservative intraparty challenge waged by James H. Greene (1918–1988),[8] a 32-year-old graduate of Fair Park High School, a veteran of the United States Navy, and at the time a reporter for the since defunct Shreveport Journal.[9]

In the summer of 1952, Brooks defeated another young conservative intraparty rival, attorney Lawrence L. May, Jr. (1921–1995), of Vivian in Caddo Parish, who in an advertisement criticized the mounting casualties of the Korean War and the excesses of federal bureaucracy. May declared himself "an anti-Truman, anti-New Deal, anti-communist Democrat." He decried inflated home prices and large federal withholding rates from paychecks so that many could "barely buy groceries."[11] "Little by little Congress has voted this socialism into our laws," May claimed.[12] He charged that Congress had followed the blueprint of The Communist Manifesto.[13] May claimed that the federal debt then equaled the value of all assessed property, real and personal, in the nation: "Did not Mr. Brooks vote for every item of the New Deal, Fair Deal, and Truman programs which he [now] says have brought the nation to the brink of disaster?"[14] May claimed that Brooks had given tacit support of a "Marxist" foreign policy: We cannot return sanity in foreign affaris by returning to Congress the same men who got us into this mess."[15]

May also declared that he could not be "bought or bribed."[16]

Brooks was reelected to Congress twelve times. In 1954, he signed the Southern Manifesto, a failed congressional attempt to block desegregation of public schools ordered by the United States Supreme Court in the case Brown v. Board of Education. Brooks continued to campaign on continued support for segregation. For a time the segregationist publisher Ned Touchstone of Bossier City worked on Brooks' staff. Brooks also urged the strengthening national defense, the expanded production of natural gas, rural electrification, and "fair prices" for farm, dairy, and ranch products.[17]

In November 1956, Brooks defeated, 68-32 percent, the Republican nominee Calhoun Allen, a longtime military reservist and the past president of the Holiday in Dixie festival, who later turned Democrat and was elected as Shreveport's public utilities commissioner and as mayor of Shreveport. Brooks declared himself a lifelong Democrat in that campaign and urged voters to support Adlai E. Stevenson of Illinois for president over Dwight D. Eisenhower, the first Republican since Reconstruction to win the electoral votes of Louisiana. Allen, at the time, had declared himself an "Eisenhower Republican".

In the 1958 Democratic primary for the U.S. House, Brooks defeated Mrs. Sophie Thompson.

In Brooks' last election to Congress in 1960, he faced another Republican challenger, Fred Charles McClanahan, Jr. (1918–2007), a contractor from Shreveport who was reared in Homer in Claiborne Parish. McClanahan flew sixty-eight combat missions in World War II and received the Distinguished Flying Cross, the Air Medal, and the Purple Heart. His wife, Mary, an educator, was active in the League of Women Voters. George Despot, later a state Republican chairman, was his campaign manager. McClanahan called for a two-party system, which he maintained would "bring us new recognition and respect in national affairs and stabilize state government with a constant watchdog ..."[18] McClanahan, who endorsed the Nixon-Lodge ticket, called for the United States "to lead the free world in resisting the spread of communism and winning the Cold War in this hemisphere and in every country. ... Our foreign aid program must be re-evaluated on the basis of our aims...."[18] Like Brooks, McClanahan affirmed his support for states' rights and segregation, having proclaimed "No right of the United States government to force integration in public schools."[18]

Brooks prevailed in his final race, 74-26 percent, though the Kennedy-Johnson ticket did not carry the Fourth Congressional District.

Brooks served on the U.S. House Committee on Armed Services from 1947 to 1958, and he then became the first chairman of the newly formed House Space Committee (later Science and Astronautics), reportedly because his seniority entitled him to a more important post on Armed Services than he was considered capable of handling. He was reappointed in 1961. It was Brooks who proposed a civilian, rather than military, space program. On May 4, 1961, his committee sent a memo to then Vice President Lyndon B. Johnson on this subject. U.S. President John F. Kennedy's speech which prompted the development of the Apollo program was delivered a few weeks later.

From his berth on the House Armed Services Committee, Brooks became a champion of veterans' causes. The Overton Brooks Veterans Administration Medical Center at 510 East Stoner Street in Shreveport just south of Interstate 20 and viewed from along the Clyde Fant Parkway is named in his honor.[19]

Brooks was the president of the National River and Harbor Congress and was an early advocate of making the Red River navigable from Shreveport to Alexandria, a cause continued by his popular Democratic successor, Joe Waggonner of Plain Dealing in northern Bossier Parish.

Two conservative legislative assistants to Representative Brooks, Ned Touchstone and Billy McCormack,[20] went on to careers of their own in journalism and the Christian ministry. 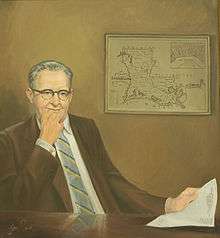 Portrait of Brooks in the Collection of the U.S. House of Representatives

On January 31, 1961, Brooks voted with a narrow majority of 217-212 to increase the size of the House Rules Committee to permit Speaker Sam Rayburn of Texas to appoint newer, more liberal members to the panel, which determines the legislation brought to the House floor. Conservatives in both parties generally opposed this vote, which they termed "packing the Rules Committee." Many southern Democrats saw the packing of the committee as certain to advance civil rights legislation to House floor, rather than to keep it confined to the committee, where opponents held the upper hand. Joe Waggonner later announced that he would challenge Brooks in the August 1962 Democratic primary. A civic group known as the Congressional Affairs League of Louisiana was formed to express a vote of "No Confidence" in Brooks. Among the organizers of the League were Charles E. Roemer, II (1923–2012), of Bossier Parish, later the commissioner of administration for eight years under Governor Edwin Washington Edwards and the father of Governor Buddy Roemer. From Webster Parish, the organizers included building contractor John Lawson McInnis, Jr. (1915–1994), and Ronzee McIntyre Bridges (1926–1992), a Shreveport native and a Minden physician who served on the Webster Parish School Board as a Conservative Democrat and had been part of the "Democrats-For-Nixon" organization in 1960.[21]

Opposition to Brooks' vote to expand the Rules Committee even led to the Ku Klux Klan burning a cross on the congressman's lawn at his Linden Street home in Shreveport. Caddo Parish Sheriff J. Howell Flournoy advised Brooks to remain in Washington and not to return home until tensions had eased. [22]

A few months after the roll call vote on enlargement of the House Rules Committee, Brooks later died of a heart attack at Bethesda Naval Hospital in Bethesda, Maryland. Former Shreveport Mayor James C. Gardner of Shreveport, who at the time lived only two blocks from Brooks, said in his memoirs that he believes Brooks' death was "largely a result of the strain that he experienced from the Rules Committee vote. The party had demanded a vote that had a large and vocal opposition among the congressman's constituents."[23]

Brooks' death propelled Waggonner into the special election to choose a new representative. After winning an easy closed Democratic primary race, Waggonner faced a stronger-than-usual Republican challenger in Charlton Lyons, a Shreveport oilman originally from Vermilion Parish in south Louisiana. Waggonner nevertheless prevailed with 54 percent of the vote, having carried every parish in the district except Lyons' adopted Caddo Parish. Waggonner ran again with ease in 1962 for election to his first full term in the House.

Brooks was a member of the Masonic Lodge, the Shriners, the Benevolent and Protective Order of Elks, American Legion, Veterans of Foreign Wars, and the Kiwanis International.

Brooks is interred at Forest Park Cemetery East in Shreveport, the resting place of many Shreveport politicians. He was Episcopalian.