Cedric Levon Richmond[1] (born September 13, 1973) is an American politician in the Democratic Party who has been the U.S. Representative for Louisiana's 2nd congressional district since 2011. His district includes most of New Orleans.

He was raised in Eastern New Orleans, going to public schools. Richmond's father died when he was seven years old. His mother was a public school teacher and small business owner. Richmond graduated from Benjamin Franklin High School, Morehouse College, Tulane School of Law and the Harvard University executive program at the John F. Kennedy School of Government.[2] 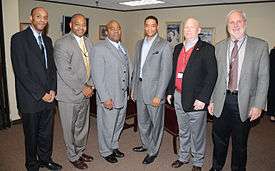 Then State Representative Richmond with FEMA officials and others

He was the Louisiana State Representative for District 101 (Orleans Parish) from 2000 to 2011.[3] Having been first elected shortly after his 27th birthday, at the time he took office he became one of the youngest legislators ever to serve in Louisiana. He served as the Chairman of the Committee on Judiciary and a member of the Ways and Means, House Executive, and Legislative Audit Advisory committees.[4] 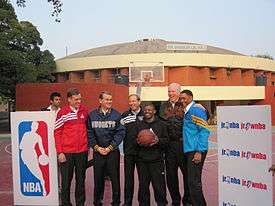 In an across-the-aisle gesture which was rare in Congress at the time, Richmond in 2014 defended his Republican colleague Vance McAllister, who had become embroiled in an alleged adultery scandal. Richmond associated the controversy with "gotcha moments" in which the "two parties in this country have gone overboard...and taken joy in the pain of their supposed opponents".[5]

On June 9, 2014, Richmond introduced the Honor Flight Act (H.R. 4812; 113th Congress), a bill that would direct the Transportation Security Administration (TSA) to establish a process for providing expedited and dignified passenger screening services for veterans traveling on an Honor Flight to visit war memorials built and dedicated to honor their service.[6]

Until his election in 2015 to the Louisiana House of Representative, Richmond's special projects director was the African-American Democrat Jimmy Harris, a New Orleans lawyer.[7]

On November 30, 2016, Richmond was elected to chair the Congressional Black Caucus in the 115th United States Congress.[8]

Richmond came in third place in the seven-candidate primary election for the Democratic nomination for Louisiana's 2nd congressional district, behind U.S. Representative William J. Jefferson and television newscaster Helena Moreno. During a primary debate, Richmond attempted to discredit Moreno with accusations of drug use, while she attempted to attack his personal integrity by bringing up his disqualification from the 2005 New Orleans City Council "D" District election.[9] Later in 2008, Richmond's law license was suspended for 6 months by the State Supreme Court in a 5–2 decision after it was found that he falsified a sworn statement claiming greater than 2 years residency in New Orleans' "D" District in order to be eligible for the district's City Council position.[10]

Richmond was the first candidate in the 2010 elections to have President Barack Obama appear in a television ad on his behalf.[11]

Most pundits reckoned Richmond as a heavy favorite to retake the seat for the Democrats, even in what was forecast to be a Republican year nationally. With a Cook Partisan Voting Index of D+25, the 2nd was far and away the most Democratic district in the country to be represented by a Republican. The next most Democratic district on that list, Delaware's At-large congressional district, had a PVI of D+7. In 2008 Obama had carried the 2nd with a 74 percent of the vote, his fifth-best performance in a Southern district and his 35th best nationally.

Richmond won the November 2, 2010 election in the heavily Democratic majority-minority district with 65 percent of the vote.[12]