The United States District Court for the Eastern District of New York (in case citations, E.D.N.Y.) is the federal district court whose jurisdiction comprises the entirety of Long Island (including the portion in New York City) and Staten Island. The court's territorial jurisdiction includes the Counties of Kings (Brooklyn), Queens, Richmond (Staten Island), Nassau, and Suffolk as well as, concurrently with the Southern District of New York, the waters of New York and Bronx counties (including New York Harbor and the East River). Courthouses are located in Brooklyn and Central Islip.

Appeals from the Eastern District of New York are taken to the United States Court of Appeals for the Second Circuit (except for patent claims and claims against the U.S. government under the Tucker Act, which are appealed to the Federal Circuit). 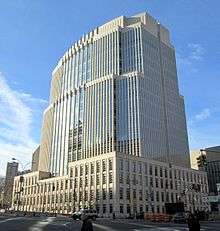 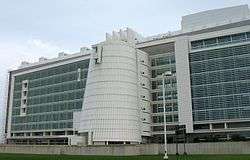 The main courthouse is at 225 Cadman Plaza East in the civic center of Brooklyn. The 15-story building was designed by Cesar Pelli. The courthouse was designed in 1995 but did not open until 2006 following redesign requirements in the wake of the Oklahoma City bombing and the September 11 attacks. It replaced the six story Emanuel Celler Federal Building (built in 1962 and located next door and connected via glass atrium). In 2008 it was renamed for Theodore Roosevelt.[1] The building was originally to be renamed in honor of former New York Governor Hugh Carey but politicians backed off because Carey was alive at the time.[2] The associated prison is the Metropolitan Detention Center, Brooklyn.

The U.S. District Court for the Eastern District of New York has 15 authorized judgeships, filled by judges appointed by the President and confirmed by the Senate. Fifteen judges who have taken senior status are eligible to continue hearing cases. On April 3, 2016, Judge Dora Irizarry became Chief Judge of the Court. Judge Jack B. Weinstein, widely regarded as among the most respected and influential Judges in America, is currently a Senior Judge in this district. Unlike many other judges at Judge Weinstein's level of seniority, he continues to maintain a full docket of cases, including many of the biggest corporate cases considered anywhere in the country.