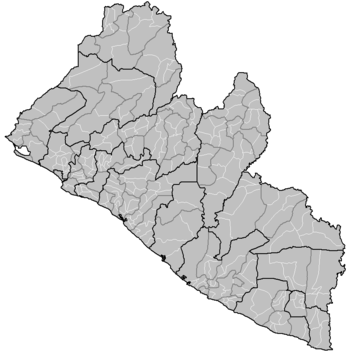 Clans of Liberia were local political units created as part of an effort to extend influence to the hinterland of the country. [1]The first tier of administrative government, beneath districts of Liberia, the clan structure only loosely corresponded to traditional local political groupings. Clans were legally recognized through legislation in 1905 and 1912. [2] In a number of cases the clans, each under a chief, were combined under larger units called chiefdoms and headed by a paramount chief. [1] Clans and chiefdoms were in some cases parts of a limited number of recognized tribes. [1] Indigenous Africans were regarded as corporate members of their respective groups rather than as individual citizens of Liberia. Clan land was owned communally and could be alienated only with the agreement of the chiefs. [1] The units of clans and chiefdoms gradually merged into the state. The County Council, affirmed in the Budget Act of 2012, replaced informal town hall meetings and includes a broad representation of citizen groups, districts, chiefdoms and clans.[2]