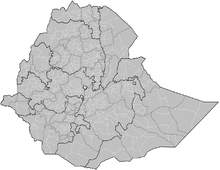 Subdivisions of Ethiopia. The darkest lines indicate Regions or States, the lighter lines Zones, and the white lines Districts.

Districts, or woreda, (Amharic: ወረዳ?) (also spelled wereda) are the third-level administrative divisions of Ethiopia. They are further subdivided into a number of wards (kebele) or neighborhood associations, which are the smallest unit of local government in Ethiopia.

Woredas are typically collected together into zones, which form a region; districts which are not part of a zone are designated Special Districts and function as autonomous entities. Districts are governed by a woreda council whose members are directly elected to represent each kebele in the district. There are about 670 rural woreda and about 100 urban woreda. Terminology varies, with some people considering the urban units to be woreda, while others consider only the rural units to be woreda, referring to the others as urban or city administrations.[1]

Although some districts can be traced back to earliest times—for example the Yem special woreda, the Gera and Gomma woredas which preserve the boundaries of kingdoms that were absorbed into Ethiopia, and the Mam Midrina Lalo Midir woreda of a historic province of Ethiopia (in this case, two of the districts of Menz)—many are of more recent creation. Beginning in 2002, more authority was passed to districts by transferring staff and budgets from the regional governments.