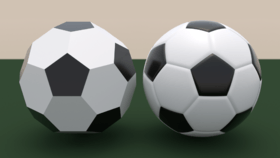 The most familiar spherical polyhedron is the soccer ball, thought of as a spherical truncated icosahedron. 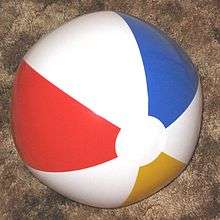 This beach ball shows a hosohedron with six lune faces, if the white circles on the ends are removed.

In mathematics, a spherical polyhedron or spherical tiling is a tiling of the sphere in which the surface is divided or partitioned by great arcs into bounded regions called spherical polygons. Much of the theory of symmetrical polyhedra is most conveniently derived in this way.

Some "improper" polyhedra, such as the hosohedra and their duals the dihedra, exist as spherical polyhedra but have no flat-faced analogue. In the examples below, {2, 6} is a hosohedron and {6, 2} is the dual dihedron.

The first known man-made polyhedra are spherical polyhedra carved in stone. Many have been found in Scotland, and appear to date from the neolithic period (the New Stone Age).

Two hundred years ago, at the start of the 19th Century, Poinsot used spherical polyhedra to discover the four regular star polyhedra.

In the middle of the 20th Century, Coxeter used them to enumerate all but one of the uniform polyhedra, through the construction of kaleidoscopes (Wythoff construction).

All the regular, semiregular polyhedra and their duals can be projected onto the sphere as tilings. Given by their Schläfli symbol {p, q} or vertex figure a.b.c. ...:

Relation to tilings of the projective plane