This article is about the football competition. For the ice hockey competition, see Coupe de la Ligue (ice hockey).

The Coupe de la Ligue (French pronunciation: ​[kup də la liɡ]), known outside France as the French League Cup, is a knockout cup competition in French football organized by the Ligue de Football Professionnel.[1] The tournament was established in 1994[2] and, unlike the Coupe de France, is only open to professional clubs in France which play in country's top three football divisions, though only four professional clubs currently play in the Championnat National.

Paris Saint-Germain are the current champions, having defeated Lille 2–1 for a record sixth title in the 2016 final. 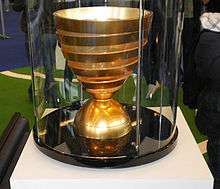 The tournament in its current format started in 1994 and was initiated by the professional teams because of their displeasure with the Coupe de France, thanks to its built-in home advantage for teams playing in the lower leagues. Entrance to the UEFA Cup, now called the UEFA Europa League, is offered to the winning team.[2] Its first winner was Paris Saint-Germain, after their 2–0 victory over Bastia.[5] The first final decided by a penalty shootout was in 1996 when Metz beat Lyon.[6] The first three finals were held at Parc des Princes; since the 1998 cup, all finals have been held at the Stade de France.[7] Strasbourg and Paris Saint-Germain have won the competition at both stadiums.[2] Gueugnon became the first team below the top division of France to win the cup after beating Paris Saint-Germain in the 2000 final.[2] Overall, there have been 14 winners of the competition since 1995.[3] The current holders of the cup are Paris Saint-Germain, who beat Lille in the 2016 final to win the cup for a record sixth time, third consecutive.[3]

In France, the Coupe de la Ligue is broadcast by France Television until the 2008–09 season and will continue to do so until at least the 2015–16 season.

In Spain, the Coupe de la Ligue is broadcast by beIN Sports (Spain).

In Australia the Coupe de la Ligue is broadcast by Setanta Sports Australia.

In many parts of the world the game is broadcast live on TV5Monde.