Not to be confused with Monaco national football team.

Association Sportive de Monaco Football Club (commonly referred to as AS Monaco (pronounced: [ɑ ɛs mɔnako]) or simply Monaco) is a Monaco-based football club.[2] The club was founded in 1924 and plays in Ligue 1, the top tier of French football. The team plays its home matches at the Stade Louis II in Fontvieille. Monaco is managed by Leonardo Jardim and is captained by João Moutinho.

Though based in Monaco, the club plays in the French football league system. Monaco is one of the most successful clubs in France, having won seven league titles and five Coupe de France trophies. The club has also competed in European football having been runners-up in the UEFA Cup Winners' Cup in 1992 and the UEFA Champions League in 2004.

The club's traditional colours are red and white, and the club is known as Les Rouges et Blancs (The Red and Whites). Monaco is also a member of the European Club Association. In December 2011, two-thirds of the club was sold to an investment group led by Russian billionaire Dmitry Rybolovlev.[3] With Rybolovlev's financial backing, the club quickly returned to Ligue 1.

AS Monaco FC was founded on 1 August 1919[4] as a unification of numerous local clubs based in France and the principality. The club's early years were spent in the amateur regional divisions of the Provence-Alpes-Côte d'Azur region, rising rapidly between the leagues in the 1920s. In 1933, Monaco were invited by the French Football Federation to turn professional. The Monégasques' first year of second division football ended in failure however, as they were relegated to the amateur leagues the following year. By 1948, Monaco re-acquired its professional status and returned to the French second division; they subsequently consistently finished in its upper echelons, with this sustained effort resulting in promotion to the French first division for the first time in 1953.

In 1960, Monaco's first iconic coach, Lucien Leduc, led the club to its first professional trophy, the Coupe de France, beating Saint-Étienne 4–2 in extra time. This initial success was bettered in the following year with the club winning the French Championship for the first time in its history, qualifying for the European Cup. Leduc subsequently led the club to its first League and Cup Double in 1963. Upon Leduc's departure in 1963, Monaco endured a barren run, entrenched in the middle half of the league for the best part of the next decade and alternating between the first and second divisions after 1963. In 1975, Jean-Louis Campora, son of former president Charles Campora, became chairman of the club. In his second season, he brought back Leduc, who immediately won the club promotion to the first division and won them the championship the following year in 1978. Leduc subsequently left the club again in 1979, to be succeeded by Lucien Muller and Gérard Banide, both of whom were unable to halt the club's decline.

The early 1980s saw a steady stream of successes in national competitions. Monaco won a title almost every other year; the Coupe de France in 1980 and 1985, the French Championship in 1982, was Coupe de France finalist in 1984. In the 1985–86 season, Monaco hammered Bordeaux 9–0, one of the biggest wins in club history.[5]

Disappointingly for Monaco fans, the club could not translate its domestic leadership into European success. Up to this point, Monaco had never passed the first round of any European competition. Monaco lost to Dundee United (1981), CSKA Sofia twice (1982 and 1984) and Universitatea Craiova.[6] 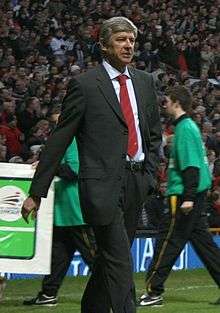 The former AS Monaco logo used until 2013.

In 1986, famed Ajax manager Ștefan Kovács, who succeeded Rinus Michels and honed his Total Football ideals with the Dutch champions, came out of a three-year "retirement" to manage Monaco, but even he could not bring them success. With the club facing a second barren spell, they signed Arsène Wenger, who had hitherto been relatively unknown, managing Nancy without much success. Wenger's reign saw the club enjoy one of its most successful periods, with several inspired signings, including George Weah, Glenn Hoddle, Jürgen Klinsmann, and Youri Djorkaeff. Youth team policies produced future World Cup winners Emmanuel Petit, Lilian Thuram and Thierry Henry. Under Wenger, they won the league in his first season in charge (1988) and the Coupe de France in 1991, with the club consistently competing in the latter stages of the European Cup and regularly challenging for the league title.[7] The club could have had even greater success in this period, as it emerged in 1993 that bitter rivals Marseille had indulged in match fixing and numerous improprieties, a view that Wenger had long held.[7] In 1994, after being blocked by the Monaco board from opening discussions with German powerhouse Bayern Munich for their vacant managerial post after being shortlisted for the role, Wenger was released from the club, several weeks after the post had already been filled.[7][8]

After Wenger's departure, the club went on to record two further league championships; under Jean Tigana in 1997 and under Claude Puel in 2000. However, as the decade came to an end, rumours were surfacing that the club was facing numerous financial difficulties. In 2003, these financial problems came to a head. Despite finishing second in the league, the club was relegated to Ligue 2 by the French Professional League for amassing a €50 million ($68 million) debt.[9] Whilst this was reduced on appeal to a ban on purchasing players, it was enough to force President Jean-Louis Campora, who had been in charge for 28 years, to step aside. He was replaced by Pierre Svara, an administrator considered to be close to the Principality's royal family but with no footballing experience.[10]

The following season saw remarkable success on the field, given the club's financial strife. The team, coached by former French national team captain Didier Deschamps and featuring stalwarts such as Fernando Morientes, Ludovic Giuly, Jérôme Rothen and Dado Pršo, finished third in Ligue 1 and enjoyed a remarkable run to the final of the UEFA Champions League, beating Real Madrid and Chelsea along the way. However, despite the on-field success, the 2003–04 season was the club's worst financial year in its history. Within 12 months, Deschamps had left as coach and Svara had been replaced by Michel Pastor.[9]

Russian billionaire Dmitry Rybolovlev bought the club in 2011 and has made it one of the biggest spenders in the football world.

With Francesco Guidolin hired to replace Deschamps, one of Pastor's first tasks was to hold on to the players who had turned the club into one of the best in Europe. However, he failed to convince them to stay and their replacements were unable to replicate previous successes. Guidolin lasted only one year, before being replaced by assistant coach Laurent Banide who, in turn, only lasted a year, before being replaced by Brazilian Ricardo Gomes. In 2008, after four years at the club featuring six coaches and only mid-table finishes, Pastor left the club amid severe criticism of his management skills.

In 2008, Jérôme de Bontin, a leading shareholder of the club since 2003, took charge of the club, promising a complete shake-up. Under his reign as president, the club brought in players such as Park Chu-young and Freddy Adu, so they did not find much success on the pitch, going through a torrid season and only managing a mid-table finish. De Bontin resigned at the end of the season, replaced by banker Étienne Franzi and a new board of directors.[11]

In July 2009, Ricardo Gomes was replaced by former Cannes and Rennes coach Guy Lacombe, inheriting a youthful squad featuring numerous highly lauded youth team prospects, including Cédric Mongongu, Serge Gakpé, Vincent Muratori, Frédéric Nimani, Nicolas N'Koulou, Park Chu-young, Yohan Mollo and Yohann Thuram-Ulien.[12] Lacombe led Monaco to eighth place in Ligue 1 in his first season in charge, but he was unable to replicate this performance in his second season, and was sacked in January 2011, with Monaco in 17th place in Ligue 1. He was replaced by former coach Laurent Banide, who was unable to turn around the club's fortunes; Monaco finished the 2010–11 season in 18th, thus becoming relegated to Ligue 2.

In December 2011, 66.67% of the club was sold to the Russian billionaire Dmitry Rybolovlev while the club were bottom of Ligue 2.[3] Banide was sacked due to this poor start to the 2011–12 season, and was replaced by Italian manager Marco Simone. Although he lifted the club to eighth by the end of the season, the club's board targeted promotion for the upcoming season and so fired him and appointed his compatriot Claudio Ranieri, whose attacking style of football saw the club score 64 goals in the 2012–13 season. With the club only losing four times, Monaco finished the season as champions, earning promotion back to Ligue 1. Using Rybolovlev's funds, Monaco were one of the biggest spenders in Europe in 2013, spending roughly £140 million, including a club-record £50 million for Radamel Falcao from Atlético Madrid.[13] 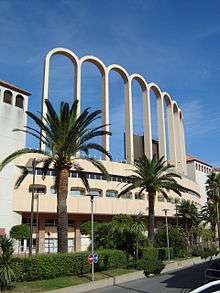 The iconic nine arches of the Stade Louis II.

Monaco played at the original Stade Louis II since its construction in 1939. In 1985, the stadium was replaced with the current iteration, built on a nearby site consisting of land reclaimed from the Mediterranean, which has become a recurring feature of the stadium's seaside surroundings. The stadium is named after the former Prince of Monaco Louis II and houses a total of 18,500 supporters. The Stade Louis II is noted for its iconic nine arches and has hosted numerous athletic events and European Cup finals. Every August from 1998 to 2012, it hosted each instance of the annual UEFA Super Cup, but from 2013 onward, UEFA decided to rotate the event throughout various stadiums in Europe. The stadium has undergone renovations numerous times and, at the beginning of the 2008–09 season, underwent numerous changes, one of which was the installation of two large screens. Monaco train in nearby La Turbie, a newly built training facility featuring state-of-the-art gyms, pools and conference centres.

AS Monaco is one of the Ambassadors for Peace and Sport, a Monaco-based international organisation.[14]

Although AS Monaco is sometimes regarded as a French club, the club claims to "represent proudly the Principality of Monaco, faithful to its roots and opened to the world".[15]

As of 31 August 2016[16] Note: Flags indicate national team as defined under FIFA eligibility rules. Players may hold more than one non-FIFA nationality.

Below are the notable former players who have represented Monaco in league and international competition since the club's foundation in 1924.

Players whose name is listed in bold represented their countries while playing for Monaco.

For a list of former and current AS Monaco players with a Wikipedia article, see here.