For traditional medicine as the mainstream practice not involving alternative medicine, see Medicine. 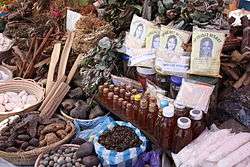 Traditional medicine in a market in Antananarivo, Madagascar

Traditional medicine (also known as indigenous or folk medicine) comprises medical aspects of traditional knowledge that developed over generations within various societies before the era of modern medicine. The World Health Organization (WHO) defines traditional medicine as "the sum total of the knowledge, skills, and practices based on the theories, beliefs, and experiences indigenous to different cultures, whether explicable or not, used in the maintenance of health as well as in the prevention, diagnosis, improvement or treatment of physical and mental illness."[1]

The WHO notes, however, that "inappropriate use of traditional medicines or practices can have negative or dangerous effects" and that "further research is needed to ascertain the efficacy and safety" of several of the practices and medicinal plants used by traditional medicine systems.[1] The line between alternative medicine and quackery is a contentious subject.

Traditional medicine may include formalized aspects of folk medicine, that is to say longstanding remedies passed on and practised by lay people. Folk medicine consists of the healing practices and ideas of body physiology and health preservation known to some in a culture, transmitted informally as general knowledge, and practiced or applied by anyone in the culture having prior experience.[2] Folk medicine may also be referred to as traditional medicine, alternative medicine, indigenous medicine, or natural medicine. These terms are often considered interchangeable, even though some authors may prefer one or the other because of certain overtones they may wish to highlight. In fact, out of these terms perhaps only indigenous medicine and traditional medicine have the same meaning as folk medicine, while the others should be understood rather in a modern or modernized context.[3]

Similarly, a home remedy is a treatment to cure a disease or ailment that employs certain spices, vegetables, or other common items. Home remedies may or may not have medicinal properties that treat or cure the disease or ailment in question, as they are typically passed along by lay people (a practice that has been facilitated in recent years by the Internet). 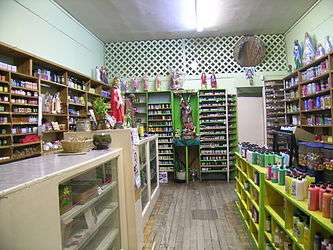 Botánicas such as this one in Jamaica Plain, Massachusetts cater to the Latino community and sell folk medicine alongside statues of saints, candles decorated with prayers, lucky bamboo, and other items.

In the written record, the study of herbs dates back 5,000 years to the ancient Sumerians, who described well-established medicinal uses for plants. In Ancient Egyptian medicine, the Ebers papyrus from c. 1552 BC records a list of folk remedies and magical medical practices.[4] The Old Testament also mentions herb use and cultivation in regards to Kashrut.

Many herbs and minerals used in Ayurveda were described by ancient Indian herbalists such as Charaka and Sushruta during the 1st millennium BC.[5] The first Chinese herbal book was the Shennong Bencao Jing, compiled during the Han Dynasty but dating back to a much earlier date, which was later augmented as the Yaoxing Lun (Treatise on the Nature of Medicinal Herbs) during the Tang Dynasty. Early recognised Greek compilers of existing and current herbal knowledge include Pythagoras and his followers, Hippocrates, Aristotle, Theophrastus, Dioscorides and Galen.

Roman sources included Pliny the Elder's Natural History and Celsus's De Medicina.[6] Pedanius Dioscorides drew on and corrected earlier authors for his De Materia Medica, adding much new material; the work was translated into several languages, and Turkish, Arabic and Hebrew names were added to it over the centuries.[7] Latin manuscripts of De Materia Medica were combined with a Latin herbal by Apuleius Platonicus (Herbarium Apuleii Platonici) and were incorporated into the Anglo-Saxon codex Cotton Vitellius C.III. These early Greek and Roman compilations became the backbone of European medical theory and were translated by the Persian Avicenna (Ibn Sīnā, 980–1037), the Persian Rhazes (Rāzi, 865–925) and the Jewish Maimonides.[6]

Arabic indigenous medicine developed from the conflict between the magic-based medicine of the Bedouins and the Arabic translations of the Hellenic and Ayurvedic medical traditions.[8] Spanish indigenous medicine was influenced by the Arabs from 711 to 1492.[9] Islamic physicians and Muslim botanists such as al-Dinawari[10] and Ibn al-Baitar[11] significantly expanded on the earlier knowledge of materia medica. The most famous Persian medical treatise was Avicenna's The Canon of Medicine, which was an early pharmacopoeia and introduced clinical trials.[12][13][14] The Canon was translated into Latin in the 12th century and remained a medical authority in Europe until the 17th century. The Unani system of traditional medicine is also based on the Canon.

Translations of the early Roman-Greek compilations were made into German by Hieronymus Bock whose herbal,published in 1546, was called Kreuter Buch. The book was translated into Dutch as Pemptades by Rembert Dodoens (1517–1585), and from Dutch into English by Carolus Clusius, (1526–1609), published by Henry Lyte in 1578 as A Nievve Herball. This became John Gerard's (1545–1612) Herball or General Hiftorie of Plantes.[6][7] Each new work was a compilation of existing texts with new additions.

Women's folk knowledge existed in undocumented parallel with these texts.[6] Forty-four drugs, diluents, flavouring agents and emollients mentioned by Dioscorides are still listed in the official pharmacopoeias of Europe.[7] The Puritans took Gerard's work to the United States where it influenced American Indigenous medicine.[6]

Francisco Hernández, physician to Philip II of Spain spent the years 1571–1577 gathering information in Mexico and then wrote Rerum Medicarum Novae Hispaniae Thesaurus, many versions of which have been published including one by Francisco Ximénez. Both Hernandez and Ximenez fitted Aztec ethnomedicinal information into the European concepts of disease such as "warm", "cold", and "moist", but it is not clear that the Aztecs used these categories.[15] Juan de Esteyneffer's Florilegio medicinal de todas las enfermedas compiled European texts and added 35 Mexican plants.

Martín de la Cruz wrote an herbal in Nahuatl which was translated into Latin by Juan Badiano as Libellus de Medicinalibus Indorum Herbis or Codex Barberini, Latin 241 and given to King Carlos V of Spain in 1552.[16] It was apparently written in haste and influenced by the European occupation of the previous 30 years. Fray Bernardino de Sahagún's used ethnographic methods to compile his codices that then became the Historia General de las Cosas de Nueva España, published in 1793.[16] Castore Durante published his Herbario Nuovo in 1585 describing medicinal plants from Europe and the East and West Indies. It was translated into German in 1609 and Italian editions were published for the next century.

In 17th and 18th-century America, traditional folk healers, frequently women, used herbal remedies, cupping and leeching.[17] Enslaved "root women" brought herbal knowledge and techniques of vaccination from Africa, infecting patients with a small bit of smallpox so they would build an immunity to the disease.[18] In Appalachia, "granny women" of Irish and Scottish ancestry, acted as midwives and used herbs, laying on of hands, Bible verses, and other techniques to cure illnesses.[19] Native American traditional herbal medicine introduced cures for malaria, dysentery, scurvy, non-venereal syphilis, and goiter problems.[20] Many of these herbal and folk remedies continued on through the 19th and into the 20th century,[21] with some plant medicines forming the basis for modern pharmacology.[22][23]

At the turn of the 20th century, folk medicine was viewed as a practice used by poverty-stricken communities and quacks. However, synthetic or biomedical products have been questioned by some parts of Western society, allowing for interest in natural medicines. The prevalence of folk medicine in certain areas of the world varies according to cultural norms.[24] Some modern medicine is based on plant phytochemicals that had been used in folk medicine.[25] Researchers state that many of the alternative treatments are "statistically indistinguishable from placebo treatments".[26]

Indigenous medicine is generally transmitted orally through a community, family and individuals until "collected". Within a given culture, elements of indigenous medicine knowledge may be diffusely known by many, or may be gathered and applied by those in a specific role of healer such as a shaman or midwife.[27] Three factors legitimize the role of the healer – their own beliefs, the success of their actions and the beliefs of the community. When the claims of indigenous medicine become rejected by a culture, generally three types of adherents still use it – those born and socialized in it who become permanent believers, temporary believers who turn to it in crisis times, and those who only believe in specific aspects, not in all of it.[28]

Elements in a specific culture are not necessarily integrated into a coherent system, and may be contradictory. In the Caribbean, indigenous remedies fall into several classes: certain well-known European medicinal herbs introduced by the early Spaniard colonists that are still commonly cultivated; indigenous wild and cultivated plants, the uses of which have been adopted from the Amerindians; and ornamental or other plants of relatively recent introduction for which curative uses have been invented without any historical basis.[29]

Rights of ownership may be claimed in indigenous medical knowledge. Use of such knowledge without Prior Informed Consent of or compensation to those claiming such ownership may be termed 'biopiracy'. See Commercialization of indigenous knowledge, also the Convention on Biological Diversity (in particular Article 8j and the Nagoya Protocol). 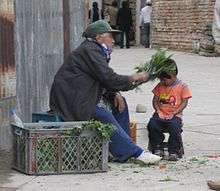 All cultures and societies have knowledge best described as folk medicine. Although there is large overlap, the denotative and connotative definitions differ.[30][31] Folk medicine often coexists with formalized, education-based, and institutionalized systems of healing such as Western Medicine or Great traditional medicine systems like Ayurvedic, Unani medicine, and Chinese medicine, but is distinguishable from formalized or institutionalized healing systems.[31]

A home remedy is a treatment to cure a disease or ailment that employs certain spices, vegetables, or other common items. Home remedies may or may not have medicinal properties that treat or cure the disease or ailment in question, as they are typically passed along by laypersons (which has been facilitated in recent years by the Internet). Many are merely used as a result of tradition or habit or because they are effective in inducing the placebo effect.[32]

One of the more popular examples of a home remedy is the use of chicken soup to treat respiratory infections such as a cold or mild flu, and according to one in vitro study, there may be benefit from this use.[33] Other examples of medically successful home remedies include willow bark tea to cure headaches and fevers (willow bark contains salicylic acid, which is chemically similar to acetylsalicylic acid, also known as aspirin); duct tape to help with setting broken bones; and duct tape or superglue to treat plantar warts; and Kogel mogel to treat sore throat.

In earlier times, mothers were entrusted with all but serious remedies. Historic cookbooks are frequently full of remedies for dyspepsia, fevers, and female complaints.[34]

Many European liqueurs or digestifs were originally sold as medicinal remedies. In Chinese folk medicine, medicinal congees (long-cooked rice soups with herbs), foods, and soups are part of the healing repertoire.[35]

Many people also use aloe leaves to cure ailments of the skin.

Although 130 countries have regulations on folk medicines, there are risks associated with the use of them. It is often assumed that because supposed medicines are herbal or natural that they are safe, but numerous precautions are associated with using herbal remedies.[36]

Use of endangered species 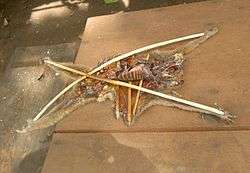 Sometimes traditional medicines include parts of endangered species, such as the slow loris in Southeast Asia.

Endangered animals, such as the Slow loris, are sometimes killed to make traditional medicines.[37]

Shark fins have also been used in traditional medicine, and although its use has not been proven, it is hurting shark populations and their ecosystem.[38]