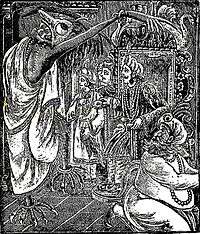 The depiction of a Rakkhoshi (a female demonic being) at the courthouse of the king. This is taken from children's classic Bengali folk-lore collection Thakurmar Jhuli (1907) by Dakshinaranjan Mitra Majumder

Ghosts are an important part of the folklore, and form an integral part of the socio-cultural beliefs of the people living in the geographical and ethno-linguistic region of Bengal, which today consists of the independent nation of Bangladesh, and the Indian states of West Bengal. Fairy tales, both old and new, often use the concept of ghosts. In modern-day Bengali literature, cinema and also in radio & television media, the references to ghosts are often found. There are also many alleged haunted sites in this region. It is believed that the spirits of those who cannot find peace in the afterlife or die unnatural deaths remain on Earth. The common word for ghosts in Bengali is bhoot or bhut (Bengali: ভূত). This word has an alternative meaning: 'past' in Bengali. Also the word Pret (Sanskrit) is used in Bengali to mean ghost. In Bengal, ghosts are believed to be the spirit after death of an unsatisfied human being or a soul of a person who dies in unnatural or abnormal circumstances (like murder, suicide or accident). Even it is believed that other animals and creatures can also be turned into ghost after their death.

The Bengali Hindu community celebrates Bhoot Chaturdashi, which normally occurs on the 14th day of Krishna Paksha (waning phase of moon) at the night before Kali Puja / Dipaboli festival. On this night, Bengalis lit 14 earthen-lamps (choddo pidim) at their homes to appease the spirits of their past 14 generations of ancestors. It is believed that in the night before Kali Puja, the spirits of these ancestors descend upon earth, and these lamps help them find their loving homes.[1][2][3] Another popular belief is that Chamunda (a fearsome aspect of Kali) along with 14 other ghostly forms ward off the evil spirits from the house as 14 earthen-lamps are lit at different entrances and dark corners of the rooms. Also, it is customary to consume a dish of 14 types of leafy vegetable (choddo shaak) during Bhoot Chaturdashi, so that evil spirits cannot possess the body.[4]

Types of ghosts and other supernatural entities 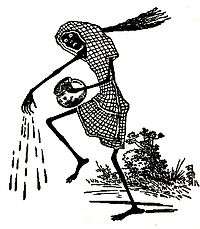 A benevolent Brahmadaitya saving a poor Brahmin man from a group of Bhoot (ghosts), while the man was cutting a branch from the yonder banyan tree or Ashwattha tree. An illustration by Warwick Goble (1912). Taken from the 1912 illustrated edition of Folk-Tales of Bengal by Lal Behari Dey. 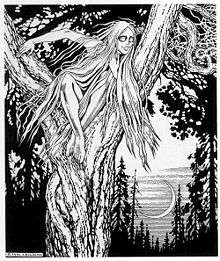 Rusalka by Ivan Bilibin, 1934. These are fierce water-nymphs which are known as Sheekol, Maal and by many other names in different localities in Bengal 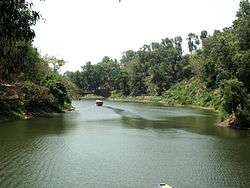 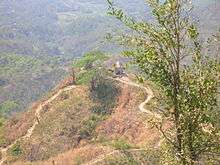 The temple on top of Chandranath Hill in Sitakunda, Chittagong 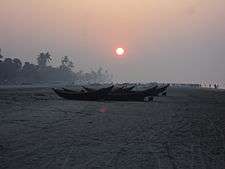 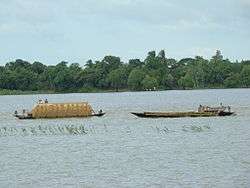 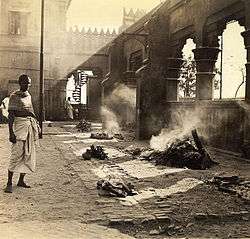 Ghosts, other similar supernatural entities, as well as tales of paranormal powers (such as clairvoyance, psychic phenomenon etc.) are plots for many short stories and novels in modern-day Bengali literature. Some classic literature and folk-lore are also based on such plot. The number of Bengali films of this genre are small in number compared to the western world. Some radio and TV programs also feature stories of people's paranormal experiences. Common people of both Bangladesh and West Bengal love the supernatural thrills, and the personal stories of people's paranormal experiences are hot topics for gossip, rumours and hangout discussions among friends and family.

Literary works involving ghostly/demonic beings is one of the most popular genres in Bengali literature. In the early days, ghosts were the only ingredients of Bengali folk-tales and fairy-tales. Lal Behari Dey has collected many folk-tales of Bengal, and translated them in English. His book called Folk-Tales of Bengal, first published in 1883, features many amazing folk-tales associated with ghostly and supernatural beings.[60]

Thakurmar Jhuli is the most classic collection of Bengali children's folk-tales and fairy-tales, which was compiled by Dakshinaranjan Mitra Majumder in 1907.[61] There we can find many different categories of supernatural entities (such as Rakkhosh) featuring in different stories. Other such story collection from the same author are Thakurdadar Jhuli (1909), Thandidir Tholay (1909) and, Dadamoshayer Tholay (1913).

Many Bengali writers have practiced the genre of supernatural/horror in their short stories, novels, and others forms of literary works. Some are mentioned below: 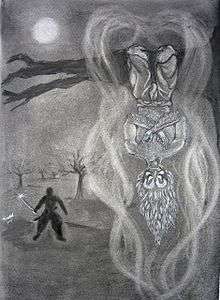 Depiction of Betaal hanging by a tree and King Vikramaditya in the background. (from Betaal Panchabinsati)

Other than the writers mentioned above, many other prominent writers of Bengal have also written short-stories involving ghosts and the supernatural, such as Provatkumar Mukhopadhyay,[80] Achintya Kumar Sengupta, Satinath Bhaduri, Buddhadeb Bosu and so on. However, at the present day, some young Bengali horror story writers are being somewhat influenced by the western horror literature, and their writings thus lack the originality of the classic Bengali horror literature and ghost stories.

In many Bengali films, ghosts are depicted in a lightly comical mood and sometimes in a friendly way. One of the examples is Goopy Gyne Bagha Byne (1969) as mentioned earlier is adopted from the story of Upendra Kishore Roychowdhury and directed by Satyajit Ray. In this film the King of Ghosts gives three boons to 'Goopy' and 'Bagha', the two poor village boys who aspired to become a singer and drummer respectively. With the help of those boons they did many amazing adventures. The film is the first film of the Goopy Gyne Bagha Byne series, followed by a couple of sequels - Hirak Rajar Deshe was released in 1980; and Goopy Bagha Phire Elo, written by Ray, but directed by his son Sandip Ray, was released in 1992.

Nishi Trishna (1989), directed by Parimal Bhattacharya was the first Bengali vampire movie, starring Shekhar Chatterjee, Prasenjit Chatterjee and Moon Moon Sen.[88][89] In this movie, some friends plan to visit the infamous Garchampa Palace which had a bad reputation for demonic blood-sucking beings that were terrorising the locality. They ultimately solve the mystery, and kill the vampire and his mentor.

Putuler Protisodh (1998), directed by Rabi Kinagi, was also based on the supernatural. The movie's story revolves around a girl named Bini who was married to Avinash. She falls prey in the hands of her in-laws who ultimately murdered her. The soul of Bini enters her doll to take revenge. She kills her mother-in-law, father-in-law and her maternal uncle one by one, and finally wants to kill her husband. But Avinash's second wife Laxmi was able to free Bini's soul from the doll.[90]

Probably the most well-known film of horror genre in recent times is Bhooter Bhabishyat (2012), directed by Anik Dutta. It tells the story of a haunted mansion 'Choudhury Palace', where ghosts from different ethnic backgrounds and eras reside (a Bengali zamindar of 18th century, an actress of the 1930s, a modern rockstar, a soldier of Indian Army who died in Kargil, etc.). The film with its simple but humorous story went on to become a massive blockbuster of 2012.[92]

Goynar Baksho (2013) is another popular film involving the supernatural. The film, directed by Aparna Sen, is an adaptation of Shirshendu Mukhopadhyay's famous tale of 3 generations of women & their changing position in society as seen in relation to a box of jewels, handed down from one generation to the next.[93]

Chhayamoy (2013) is another notable horror movie based on Shirshendu Mukhopadhyay's novel of the same name. The story is about Indrajit, a UK based scholar. While working to preserve historical documents he find a parchment from which he learns about treasures hidden in an old palace in Simulgarh, a village of West Bengal. Indrajit comes to the village, finds out the treasure, but, a local goon Gagan Sapui accuses him of robbery, beats him up and expels him out of the village. Sapui wants to melt those coins to make new jewellery. After being beaten up, Indrajit goes to forest near the village where he meets Chhayamoy, a benevolent ghost. After listening the incidence from Indrajit, Chhayamoy decides to teach Gagan a lesson.[94]

The number of horror movies from Bangladeshi film industry are only a few, and most of these movies can be typically categorized as low-budget horror-comedy. Few such examples are Rokto Pipasha (2007),[95][96][97] Daini Buri (2008)[98] and, Sedin Brishti Chilo (2014).[99][100] Some Bangladeshi movies involving supernatural theme are stories about shapeshifting snakes or Ichchhadhari Nag that can take human form. Examples of such movies are Kal Naginir Prem,[101] Bishakto Nagin,[102] Bishe Bhora Nagin (1999),[103] Sathi Hara Nagin (2011)[104] etc.

A live radio program called Bhoot FM is being aired by Bangladeshi radio channel Radio Foorti 88.0 FM at 12:00 am, every Friday night.[10] The program is being aired since August 13, 2010; and is hosted by RJ Russell. In this program, people from all over Bangladesh come and share their real-life experiences associated with ghosts, demons, jinns and the paranormal/supernatural. The Bengali community from all over the world also share their supernatural experiences by sending audio clips and email that is played/read in this program. Other such radio program is Dor, aired by ABC Radio 89.2 FM. Similar kind of programs are also aired on TV channels, such as Moddhorater Train (meaning 'Midnight Train') by Maasranga Television.