This article discusses the phonological system of the Czech language.

The following chart shows a complete list of the consonant phonemes of Czech:

1 The phoneme /r̝/, written ⟨ř⟩, is a raised alveolar non-sonorant trill. Its rarity makes it difficult to produce for foreign learners of Czech, who may pronounce it as [rʒ]; however, it contrasts with /rʒ/ in words like ržát [rʒaːt] ('to neigh'), which is pronounced differently from řád [r̝aːt] ('order'). The basic realization of this phoneme is voiced, but it is voiceless [r̝̊] when preceded or followed by a voiceless consonant or at the end of a word.

/t/ and /d/ can be pronounced as dental stops.

The voiceless realization of the phoneme /ɦ/ is velar [x].

The glottal stop is not a separate phoneme. Its use is optional and it may appear as the onset of an otherwise vowel-initial syllable. The pronunciation with or without the glottal stop does not affect the meaning and is not distinctive.

The glottal stop has two functions in Czech:

In the standard pronunciation, the glottal stop is never inserted between two vowels in words of foreign origin, e.g. in the word koala.

The phoneme /ɡ/, and the affricates /d͡z/ and /d͡ʒ/ occur in words of foreign origin or dialects only. (However, [ɡ] may also occur as a result of voicing assimilation of /k/, see "assimilation of voice" below.) Phonetically, the affricates can occur at morpheme boundaries (see consonant merging below).

Consonants in the script

Other consonants are represented by the same characters (letters) as in the IPA.

Realizations of consonant phonemes are influenced by their surroundings. The position of phonemes in words can modify their acoustic realizations without a change of the meaning.

Assimilation of the place of articulation

Labiodental [ɱ] is a realization of /m/ before labiodental fricatives /ɦ/ and /v/, e.g. in the word tramvaj

The former assimilation is optional. Realization as [tramvaj] is possible, especially in more prestigious registers.

Voiced and voiceless obstruents form pairs in which the assimilation of voice applies (see table):

Sonorants (/m/, /n/, /ɲ/, /j/, /r/ and /l/) have no voiceless counterparts and are never devoiced. They do not cause the voicing of voiceless consonants in standard pronunciation, e.g. sledovat [slɛdovat] ('to watch').

There are some exceptions to the rules described above:

There are 10 monophthongal and 3 diphthongal vowel phonemes in Czech: /iː ɪ ɛː ɛ aː a oː o uː u eu̯ au̯ ou̯/. Czech is a quantity language: it differentiates five vowel qualities that occur as both phonologically short and long. The short and long counterparts generally do not differ in their quality, although long vowels may be more peripheral than short vowels.[1]

Vowel modifications such as nasalization do not occur in Czech. The vowels are never reduced and undergo no assimilations. Vowel length and quality is independent of the stress. 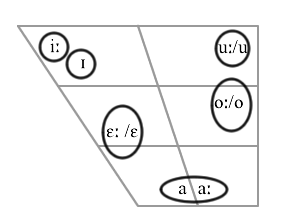 Long vowels are indicated by an acute accent (čárka) or a ring (kroužek).

The phonemes /o/ and /oː/ are sometimes transcribed /ɔ/ and /ɔː/. This transcription describes the pronunciation in Central Bohemia and Prague, which is more open. The standard pronunciation is something between [o(ː)] and [ɔ(ː)], i.e. mid back vowel.

Note that ě is not a separate vowel. It simply denotes [ɛ] after a palatal stop or palatal nasal (e.g. něco [ɲɛtso]) and [jɛ] after labial consonants (e.g. běs [bjɛs]).

The stress is nearly always fixed to the first syllable of a word. Exceptions :

Long words can have the secondary stress which is usually placed on every odd syllable, e.g. ˈnej.krás.ˌněj.ší ('the most beautiful').

The stress has no lexical or phonological function; it denotes boundaries between words but does not distinguish word meanings. It has also no influence on the quality or quantity of vowels, i.e. the vowels are not reduced in unstressed syllables and can be both short and long regardless of the stress. Thus, the Czech rhythm can be considered as isosyllabic.

Czech is not a tonal language. Tones or melodies are not lexical distinctive features. However, intonation is a distinctive feature on the level of sentences. Tone can differentiate questions from simple messages, as it need not necessarily be indicated by the word order:

All these sentences have the same lexical and grammatical structure. The differences are in their intonation.

Open syllables of type CV are the most abundant in Czech texts. It is supposed that all syllables were open in the Proto-Slavic language. Syllables without consonant onset occur with a relatively little frequency. Using the glottal stop as a preture in such syllables confirms this tendency in the pronunciation of Bohemian speakers. In Common Czech, the most widespread Czech intedialect, prothetic v– is added to all words beginning with o– in standard Czech, e.g. voko instead of oko (eye).

The general structure of Czech syllables is:

Thus, Czech word can have up to four consonants in the initial group and three consonants in the final group (not including syllabic consonants). The syllabic nucleus is usually formed by vowels or diphthongs, but in some cases syllabic sonorants (/ɲ/ and /l/, rarely also /m/ and /n/) can be found in the nucleus, e.g. vlk [vl̩k] ('wolf'), krk [kr̩k] ('neck'), osm [osm̩] ('eight').

Vowel groups can occur in the morpheme boundaries. They cannot include more than two vowels. Both vowels in the groups are separate syllabic nuclei and do not form diphthongs.

Phoneme alternations in morphophonemes (changes which do not affect morpheme meaning) are frequently applied in inflections and derivations. They are divided into vowel and consonant alternations. Both types can be combined in a single morpheme:

Some other disjunctive vowel alternations occur in word roots during derivations (rarely also during inflections):

Emergence/disappearance alternations also take place, i.e. vowels alternate with null phonemes. In some allomorphs, /ɛ/ is inserted between consonants in order to make the pronunciation easier:

Some other alternations of this type occur, but they are not so frequent:

Alternations of hard and soft consonants represent the most abundant type. They occur regularly in word-stem final consonants before certain suffixes (in derivations) and endings (in inflections). Hard consonants are softened if followed by soft /ɛ/ (written <e/ě>), /ɪ/, or /iː/ (written ⟨i⟩ and ⟨í⟩, not ⟨y⟩ and ⟨ý⟩). These changes also occur before some other suffixes (e.g. –ka). Softening can be both correlative and disjunctive.

The last four examples are emergence alternations. A phoneme (/ɪ/ or /ɲ/) is inserted in the pronunciation, but for the historical reasons, these changes are indicated by ⟨ě⟩ in the orthography (see the orthographic notes below). These alternations are analogical with softening alternations, therefore they are mentioned here. They also occur in word roots together with vowel alternations (usually |ɛ/iː|).

Some other alternations occur but they are not so frequent. They are often little evident:

In some letter groups, phonological principles of the Czech orthography are broken:

The sample text is a reading of The North Wind and the Sun by a native speaker of Common Czech, who is from Prague.[3]