Dadar is a densely populated residential and shopping neighbourhood in Mumbai's central district and a prominent transit hub with local and national connectivity.

Dadar (दादर) in Marathi language means 'Ladder', perhaps indicative of its importance as an important connection between main Mumbai island and surrounding islands in the past.

In the 16th century, the area was known as lower Mahim as it was located on the island of Mahim, one of the Seven islands of Mumbai which, after Mumbai Island proper, was the most important during the whole of the Portuguese period.[2] The Portuguese Franciscans built a church here in 1596 called Nossa Senhora de Salvação, which is popularly known today as Portuguese Church and is a familiar Dadar landmark.[3]

The Dadar-Matunga-Wadala-Sion scheme of 1899-1900 was the first planned scheme in Mumbai. The Bombay Improvement Trust devised the plan to relieve congestion in the centre of the town following the plague epidemics of the 1890s. According to the survey plan, 60,000 people were to be housed at Dadar-Matunga and an equal number in Sion-Matunga. 85,000 people were to be accommodated in the developments in Sewri-Wadala.

Among the institutions moved to Dadar under the City Improvement Trust (CIT)[4] plan were Victoria Jubilee Technical Institute, now known as Veermata Jijabai Technological Institute and King George school, now known as IES' Raja Shivaji Vidyalaya (now a collection of several schools). The plan regulated constructions and restricted building construction to three storeys high with an open spaces between them.

Ramnarain Ruia College in 1937 and Ramniranjan Podar College was founded in 1939, completing Dadar’s transition from residential suburb to diverse neighbourhood. Both colleges are run by SP Mandali. Dr. Antonio Da Silva High School one of the oldest school founded in 1851 during the British India period is located here.

During the cotton mill era of Mumbai, some key mills like Bombay Dyeing (Spring Mills), Gold Mohur Mills, Kohinoor Mills, Ruby Mills and Tata Mills were located in Dadar. During the redevelopment of Mumbai mills some of these were redeveloped or went defunct.

By 1937 Shivaji Park and the surrounding areas were developed. This public space was to become an important stage in the political drama leading up to India's independence. Later political history in Mumbai also unfolded in this park.

In 1993 Bombay bombings, a defused bomb was discovered in Dadar by Dr. JK Mandot who also provided the Mumbai police their first clue in the 1993 blasts probe, when on March 13, 1993, he alerted them about a dubious-looking Bajaj Chetak scooter (MH-04-Z-261) parked outside his dispensary on Naigaum Cross Road. The scooter, laden with RDX, had failed to explode, and was defused after Mandot's call to the police control room[5]

Dadar as a neighbourhood has undergone tremendous changes. Places like Parsi colony and Hindu colony still retain the old world charm but much has changed over the years - Iranian restaurants have vanished, old traditional buildings have been converted into modern apartments, chawls are difficult to find and existing ones are in dilapidated condition, well known eateries are giving way to new food joints and delicacies, and the history behind landmarks like Dadar T.T. have become obscure.

Dadar is located between Matunga, Wadala, Parel, Prabhadevi and Elphinstone Road. Dadar is divided into East and West by the railway line. Dadar East is popularly called Dadar Central or Dadar T.T (now Khodadad Circle) because the former Dadar Tram Terminus (which was closed with the closure of the tram network in Mumbai) was located here. Dadar West is sometimes referred to as Dadar B.B. because it lies along the western line, which was once part of the Mumbai & Baroda & Central India (BB&CI) Railway.

Built in 1923, Lokmanya Tilak bridge (once referred by locals as Kingsway bridge as it was extended to Kingsway road which was renamed Ambedkar road) is one of the oldest bridge in Mumbai and connects Dadar east (Khodadad Circle) with Dadar west and even more so, between east and west Mumbai. This rail-over bridge becomes even more critical connect for devotees during Ganesh Visarjan when Ganesh idols across eastern side of Mumbai are brought to Dadar Chowpatty for the immersion (visarjan). Apart from this bridge, there are few pedestrian rail-over bridges that keeps the crowd moving on foot from east and west

Shivaji Park Residential area, a predominantly upper middle class residential zone, has also become a highly sought after residential area in Central Mumbai because of its proximity to the Dadar Chowpatty, Shivaji Park, Mahatma Gandhi Olympic Swimming Pool and the famous Siddhivinayak temple in Prabhadevi. Adjoining Shivaji Park is Chowpatty or sea shore and the roads that connect west Dadar to Mahim on north and Prabhadevi on south. 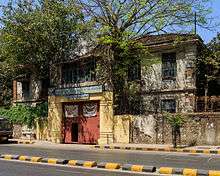 Dadar West market is a very popular shopping destination for residents of central Mumbai, the suburbs, and distant satellite towns. Dadar vegetable market is the heart of the city and was responsible for distributing vegetables across all of Mumbai. It was once said that one can get all possible things in Dadar. Both east and west areas are dotted with women's (particularly spree) and children's clothing shops. Many prominent jewellery shops can be found in Dadar. Mumbai's first Titan watches showroom was opened in Dadar in 1989.

Dadar is also home to the Mumbai Mayor's Bungalow, the official residence of the Mayor of Mumbai and the famous Sena Bhavan, headquarters of the political party Shiv Sena.

Dadar is a prominent railway terminus on both the Western and Central lines of the Mumbai Suburban Railway network. Being the only railway common railway station to both the Central and Western lines, it makes a transit point for many passengers travelling through Suburban Railway. It's estimated that the station receives more than 500,000 visitors daily[6]

Dadar east has been also a key interchange point for those coming from Pune, Panvel and Navi Mumbai by road transport. A bus hub next to Dadar GPO is destination point for many buses coming from out of Mumbai.

Dadar has long been a cultural centre for Maharashtrians and the Marathi speaking population, and also for the entire Indian diaspora.

Dada Saheb Phalke (in recognition of whom the road Dada Saheb Phalke Road is named) partly shot his first film “Raja Harischandra” at Mathura Bhavan, in one of his friend's residence in Dadar East.[7] Apart from this studio, many other prominent film studios such as Ranjit Studios and Rooptara Studios were eventually built on this road.

There is also active crowd that watches dramas and Shivaji Natya Mandir is one of the few theatres in Mumbai that has catered to the middle class' interest in the dramatic arts. It was here that artists like Vijay Tendulkar, Vijaya Mehta, Mahesh Elkunchwar, Dr Shreeram Lagoo and Nana Patekar found an eager audience.

Dadar has been also home to movie halls like Chitra Cinema, Inox Nakshatra and Hindmata Cinema. Plaza Cinema, a prominent theatre in west Dadar was damaged during the 1993 bomb-blasts/riots. It has now reopened and remains one of the theatres in Mumbai that show Marathi movies.

Vada pao was invented outside Dadar Station in 1971, by Ashok Vaidya using the Pao (Portuguese word for bread). Apart from Vada Pao, Dadar is also popular for traditional Maharashtrian food like Batata Vada, Thalipith, Sabudana Vada, Misal Pav, Usal Pav, Puri Bhaji, Pithla Bhakri, Piyush (a sweet drink) and Lassi. There are many restaurants likePrakash Hotel, Aaswad Hotel, Sindhudurg Hotel, Gomantak Hotel and Panshikar that serve marathi food. However food option is as diverse as it can get in Mumbai. Restaurants catering to Udupi, Panjabi and north Indian, Chinese, Thai and many other cuisine dot the landscape. 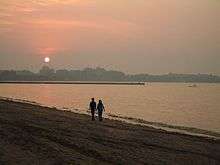 Dadar chowpatty (sea shore) with its sea, sand and Mumbai chat counters is popular gateway for families from the hustle bustle of the city. Some other parks include Five Gardens next to Parsi Colony, Veer Kotwal Udyan, Vaidya Udyan along Lakhamsi Nappu road.

Dadar is also home to Chaitya Bhoomi, memorial and place where Dr. Babasaheb Ambedkar, Chief architect of Indian Constitution was cremated. His death anniversary, 6 December, is observed as Mahaparinirvan Din when lakhs of people across the nation throng Chaityabhoomi to pay homage to him.

Dadar boasts some of the reputed schools and colleges in Mumbai. Antonio Da Silva High School (estd 1868), King George School (now IES) (estd 1912) and Balmohan Vidyamandir (estd 1940) are some of the oldest schools founded during the British India period. Dadar east houses Smt. Kama Mehta Dadar School For The Blinds, a 100+ year old institution that was set up by American Marathi Mission to serve blind children.[8]

Two of the most prominent colleges in Mumbai, Ramnarain Ruia College and Ramniranjan Anandilal Podar College of Commerce and Economics are located near Dadar.[9] Veermata Jijabai Technological Institute is one of the oldest engineering colleges in India and is located in Matunga, adjacent to Dadar.[10]

List of prominent personalities who resided in Dadar include: