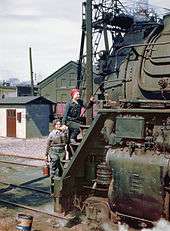 Women wipers of the Chicago and North Western Railroad cleaning one of the giant "H" class locomotives, Clinton, Iowa, 1943

A wiper is the most junior rate in the engine room of a ship. The role of a wiper consists of cleaning the engine spaces and machinery, and assisting the engineers as directed. The position is an apprenticeship to become an oiler, and has been for centuries. In modern times, a wiper is required to work on a ship for a specific amount of time, gaining what is referred to as "sea time."

Railroad workers who performed similar jobs were also known as wipers, or in the UK as "cleaners".[1]