A chief mate (C/M) or chief officer, usually also synonymous with the first mate or first officer (except on passenger liners, which often carry both), is a licensed member and head of the deck department of a merchant ship. The chief mate is customarily a watchstander and is in charge of the ship's cargo and deck crew. The actual title used will vary by ship's employment, by type of ship, by nationality, and by trade. Informally, the Chief Mate will often simply be called "The Mate." The term "Chief Mate" is not usually used in the Commonwealth, although Chief Officer and First Mate are.

The chief mate is responsible to the Captain for the safety and security of the ship. Responsibilities include the crew's welfare and training in areas such as safety, firefighting, search and rescue.

Senior on board Operations Manager

The Chief Mate, who is the second in command of the vessel, is often equated, in corporate terms, to a senior manager for the operations on board, as the Mate is in charge of a number of departmental functions. In modern cargo vessels, the Mate holds appointments like Head of Deck Department, Head of Cargo/ Stowage Operations, Head of Safety/ Fire Fighting, Head of On-Board Security (Ship Security Officer), Head of Environment and Quality, and so forth.

As cargo officer, a chief mate oversees the loading, stowage, securing and unloading of cargoes. Moreover, the chief mate is accountable for the care of cargo during the voyage. This includes a general responsibility for the ship's stability and special care for cargoes that are dangerous, hazardous or harmful.

Even under the best of conditions, a ship is balanced precariously upon the water and is subject to a number of forces, such as wind, swells, and storms, which could capsize it. The cargo officer uses tools like ballasting and load balancing to optimize the ship's performance for the expected type of environment.

Traditionally, the chief mate stands a "4-8" watch: from 4 AM until 8 AM and 4 PM until 8 PM.,[1] in port and at sea, the chief mate is responsible to the captain for keeping the ship, crew, and cargo safe. On watch, the mate must enforce all applicable regulations, such as the International Convention for the Safety of Life at Sea and pollution regulations. In port, the watch focuses on duties such as cargo operations, fire and security watches, monitoring communications and the anchor or mooring lines.

IMO regulations require the officer be fluent in English. This is required for a number of reasons, such as ability to use nautical charts and nautical publications, to understand weather and safety messages, communicate with other ships and coast stations, and to be able to work with a multi-lingual crew.

At sea, the mate on watch has three fundamental duties: navigate the ship, safely avoid traffic, and respond to any emergencies that may arise. Mates generally stand watch with able seamen who act as helmsman and lookout. The helmsman executes turns and the lookout reports dangers such as approaching ships. These roles are often combined to a single helmsman/lookout and, under some circumstances, are eliminated completely. The ability to smartly handle a ship is key to safe watchstanding. A ship's draught, trim, speed and under-keel clearance all affect its turning radius and stopping distance. Other factors include the effects of wind and current, squat, shallow water and similar effects. Shiphandling is key when the need arises to rescue a man overboard, to anchor, or to moor the ship.

The officer must also be able to transmit and receive signals by Morse light and to use the International Code of Signals.

For more details on this topic, see Navigation. 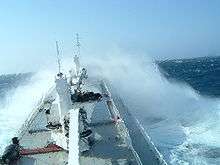 The conditions for navigating a ship can often be challenging.

Celestial, terrestrial, electronic, and coastal navigation techniques are used to fix a ship's position on a navigational chart. The officer directs the helmsman to keep to track, accounting for effects of winds, tides, currents and estimated speed. The officer uses supplemental information from nautical publications, such as Sailing Directions, tide tables, Notices to Mariners, and radio navigational warnings to keep the ship clear of danger in transit.

Safety demands the mate be able to quickly solve steering control problems and to calibrate the system for optimum performance. Since magnetic and gyrocompasses show the course to steer, the officer must be able to determine and correct for compass errors.

Weather's profound effect on ships requires the officer be able to interpret and apply meteorological information from all available sources. This requires expertise in weather systems, reporting procedures and recording systems.

The main purpose for Radar and Automatic Radar Plotting Aids (ARPA) on a ship's bridge is to move safely among other vessels. These instruments help to accurately judge information about prominent objects in the vicinity, such as:

These factors help the officer apply the COLREGS to safely maneuver in the vicinity of obstructions and other ships.

Unfortunately, radar has a number of limitations, and ARPA inherits those limitations and adds a number of its own. Factors such as rain, high seas, and dense clouds can prevent radar from detecting other vessels. Further, dense traffic and course and speed changes can confuse ARPA units. Finally, human errors such as inaccurate speed inputs and confusion between true and relative vectors add to the limitations of the radar/ARPA suite.

Under the best conditions, the radar operator must be able to optimize system settings and detect divergences between an ARPA system and actual conditions. Information obtained from radar and ARPA must be treated with scrutiny: over reliance on these systems has sunk ships. The officer must understand system performance, limitations and accuracy, tracking capabilities and limitations, and processing delays, and the use of operational warnings and system tests.

Emergencies can happen at any time. The officer must be equipped to safeguard passengers and crew. The officer must be able to take initial action after a collision or a grounding. Responsibilities include performing damage assessment and control, understanding the procedures for rescuing persons from the sea, assisting ships in distress, and responding to any emergency which may arise in port.

The Chief Mate is in charge of the firefighting and damage control teams. He is scene leader and reports via radio to the Captain who is in command and coordinates the larger response from the bridge.

The officer must understand distress signals and know the IMO Merchant Ship Search and Rescue Manual.

Understanding ship's stability, trim, stress, and the basics of ship's construction is a key to keeping a ship seaworthy. The mate must know what to do in cases of flooding and loss of buoyancy. Fire is also a constant concern. Knowing the classes and chemistry of fire, fire-fighting appliances, and systems prepares the officer to act fast in case of fire.

An officer must be expert in the use of survival craft and rescue boats. Expertise includes the vessels' launching appliances and arrangements, and their equipment including radio life-saving appliances, satellite EPIRBs, SARTs, immersion suits and thermal protective aids. It's important to be expert in the techniques for survival at sea techniques in case it's necessary to abandon ship.

Officers are trained to perform medical tasks, and follow instructions given by radio or obtained from guides. This training includes what to do in case of common shipboard accidents and illnesses.

On very large or international passenger ships it is usual for a chief/first officer to hold a master's certificate so that he can take over from the master if necessary. In the same way, a second officer may hold a chief officer's certificate. 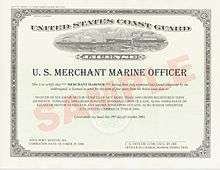 A chief mate must have a number of qualifications, including a license.

To become a chief mate (unlimited) in the United States, one must first accumulate at least 365 days of service while holding a second mate's license. Then, the candidate must attend approximately 13 weeks of classes or complete the assessments from NMC Policy Letter 04-02[2] and pass a series of examinations given by the United States Coast Guard.[3] Similarly, one must have worked as a third mate for 365 days to have become a second mate. There are many special cases in license upgrades at the individual level, as licensing regulations change from time to time. A sizable portion of mates still working received their licenses before current laws went into effect.

There are two methods to attain an unlimited third mate's license in the United States: to attend a specialized training institution, or to accumulate "sea time" and take a series of training classes and examinations.[4]

Training institutions that can lead to a third mate's license include the U.S. Merchant Marine Academy (deck curriculum), the U.S. Coast Guard Academy and U.S. Naval Academy with qualification as an underway officer in charge of a navigational watch, any of the state maritime colleges, the Great Lakes Maritime Academy, or a three-year apprentice mate training program approved by the Commandant of the U.S. Coast Guard.

A seaman may start the process of attaining a license after three years of service in the deck department on ocean steam or motor vessels, at least six months of which as able seaman, boatswain, or quartermaster. Then the seaman takes required training courses, and completes on-board assessments. Finally, the mariner can apply to the United States Coast Guard for a Third Mate's license.

A master of 1,600 ton vessels can, under certain circumstances, begin the application process for an unlimited third mate's license.

If approved the applicant must then successfully pass a comprehensive license examination before being issued the license. Hawsepiper is an informal maritime industry term used to refer to an officer who began his or her career as an unlicensed merchant seaman and did not attend a traditional maritime college/academy to earn the officer license.

A ship’s hawsepipe is the pipe passing through the bow section of a ship that the anchor chain passes through. Hawsepiper refers to climbing up the hawsepipe, a nautical metaphor for climbing up the ship's rank structure. Hawsepiper is considered a positive term when said respectfully. Many hawsepipers are proud of their background and use the term to describe themselves.

Since the requirements of STCW '95 have been enacted, there have been complaints that the hawsepiper progression path has been made too difficult because of the cost in time and money to meet formal classroom training requirements. These critics assert that the newer requirements will eventually lead to a shortage of qualified mariners, especially in places like the United States.