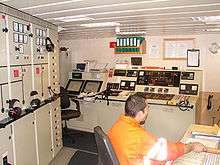 The engine control room on the Argonaute. The Argonaute is a French supply vessel, mainly used for anti-pollution missions along with the tugboat Abeille Bourbon. It was built in 2003 in Norway, is based in Brest, belongs to SURF and is used by the French Navy.

In maritime transportation, the engine department or engineering department is an organizational unit aboard a ship that is responsible for the operation, maintenance, and repair of the propulsion systems and the support systems for crew, passengers, and cargo.[1] It is also responsible for repairing and maintaining other systems on the ship, such as:

The engine department emerged with the arrival of marine engines for propulsion, largely during the later half of the 19th century. Due to advances in marine technology during the 20th century, the engineering department aboard merchant ships is considered equally important as the deck department, since trained engineers are required to handle the machinery on a ship.

Nowadays due to the increase in automation on merchant vessels and the increase in the unattended machinery spaces (UMS) aboard them, the number of seafaring engineers has decreased drastically on board merchant ships. Today, the engine department usually consists of the following number of engineers and ratings: