In October 1941, the Western Desert Air Forces had 16 squadrons of aircraft (nine fighter, six medium bomber and one tactical reconnaissance)[1] and fielded approximately 1,000 combat aircraft by late 1941. By the time of the Second Battle of El Alamein, the DAF fielded 29 squadrons (including nine South African and three USAAF units) flying Boston, Baltimore and Mitchell medium bombers and Hurricane, Kittyhawk, Tomahawk, Warhawk and Spitfire fighters and fighter-bombers.[1] There were over 1,500 combat aircraft, more than double the number of aircraft the Axis could field. 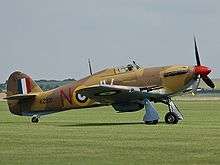 On 10 June 1940, RAF bomber squadrons in AHQ Egypt—under the direction of No. 202 Group RAF—totalled five squadrons of Bristol Blenheims, one of Vickers Valentias and one of Bristol Bombays.[3] The Valentia and Bombay could either be used as troop transports or medium bombers.

Prior to the Italian invasion of Egypt, under Air Commodore Raymond Collishaw, the RAF in Egypt—which comprised nine squadrons—focused its activities on ground support, reconnaissance, and only when necessary aerial combat with the Italian Regia Aeronautica. The force at Collishaw's disposal consisted of No. 33, No. 80, and No. 112 Squadrons with Gloster Gladiators, No. 208 Squadron RAF with Westland Lysanders, four Blenheim squadrons (No.s 30, 55, 113, and 211) and No. 216 Squadron RAF with Bombays. With this small force, the RAF had to "equate its attempt to dominate the front line with avoidance of unnecessary losses".[4] Aggressive actions induced a "defensive mentality among the Italians", aided by expedients such as using the single Hawker Hurricane in the Middle East, rapidly switched between landing grounds, to provide an exaggerated picture of British strength in the eyes of Italian reconnaissance aircraft. There were occasional signal successes as well; on 17 August 1940, Gladiators covering the Mediterranean Fleet shot down eight Savoia-Marchetti SM.79 bombers without loss.

The force in the Middle East was clearly too small, reinforcement by sea was a 14,000-mile trip that required three months to complete, and reinforcement via the Western Mediterranean was hardly practical due to the ranges involved, which only bombers could achieve. Thus, an alternate reinforcement route began to be pioneered via Takoradi in the Gold Coast, from which new aircraft were received by sea, assembled, test flown, and ferried across Africa to Khartoum, a route first pioneered by Air Vice-Marshal Arthur Coningham in 1925. By this and other means, by the end of November 1941 the RAF in Egypt had been bolstered by No. 73 and No. 274 Squadrons with Hurricanes and No. 37 and No. 38 Squadrons with Vickers Wellingtons, as well as several South African Air Force squadrons, ready for the beginning of Operation Compass. During Compass, "the squadrons of Hurricanes, Lysanders, and Blenheims .. strove hard to keep pace [with the ground forces], often landing after a combat sortie at a more advanced strip than from which they had set out."[5]

On 19 April 1941, RAF No. 204 Group was created under the command of Air Commodore Raymond Collishaw and consisted of the following units:

On 30 July 1941, Collishaw handed over No. 204 Group to Coningham. Later that year, the RAF's whole Middle East Command came under the command of Air Marshal Sir Arthur Tedder. On 21 October 1941, Air Headquarters Western Desert was created by upgrading 204 Group to command status.

Three wings operated in North Africa at first, 258 and 269 Wings operated over the front line and 262 Wing defended the Nile Delta.[7] On 20 January 1942, the command was renamed Air Headquarters Libya; however, on 3 February it reverted to its former name of the Air Headquarters Western Desert.

Kittyhawks of No. 112 Squadron RAF prepare to take off in Tunisia.

US Desert Air Task Force (Part of US Middle East Air Force but, with exception of 81st Bombardment Squadron, under WDAF operational control):

DAF continued to provide close tactical support to the British 8th Army as a subordinate element of NATAF. MAC was disbanded in December 1943 and reorganised into the Mediterranean Allied Air Forces (MAAF) which absorbed NAAF, RAFM, and possibly some units of RAFME. DAF, still under Broadhurst, became a component of the Mediterranean Allied Tactical Air Force (MATAF) under Major General John K. Cannon. The successful tactical air support of ground forces in Egypt and Libya pioneered by Tedder and Coningham was the model for the establishment of NAAF at the Casablanca Conference and the tri-force (strategic, coastal, tactical) elements of this air interdiction model were retained in the new MAAF structure which generally persisted until the end of World War II. DAF existed until 30 June 1946, when it was renamed the Advanced AHQ Italy. 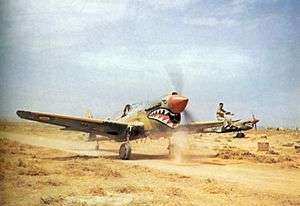 1943: A P-40 Kittyhawk from No. 112 Squadron RAF, taxiing through scrub at Medenine, Tunisia. The squadron was the first unit in any air force to use the "shark mouth" logo on P-40s.

The air defence of Britain always received priority, so the DAF was generally equipped with older aircraft types. Initially equipped with obsolete types like the Gloster Gladiator biplane fighter and the Bristol Blenheim light bomber, the DAF made a good showing against the equally obsolete Italian Air Force. After the direct threat to Britain receded, newer types were assigned to the DAF, such as the Hawker Hurricane and Douglas Boston medium bomber in 1941.

US-built P-40 Tomahawks/Kittyhawks also went to the DAF as it was unsuited to European operations which were generally fought at much higher altitudes and against more formidable opposition. The P-40 was used initially as an air superiority fighter but it was also adapted (and found to be ideally suited) to ground attack missions.

The DAF always outnumbered its Axis opponents and concentrated on long-range interdiction and direct tactical 8th Army support. Unfortunately, these tactics meant that the faster Messerschmitt Bf 109s of Jadgdeschwader 27 usually had the advantage of height and surprise over the low-level, slow-flying DAF fighters and losses were correspondingly heavy.

In 1942, the DAF reorganised its tactics and upgraded its inventory. Spitfires were eventually assigned in the air superiority role, becoming operational in August 1942, which allowed the DAF to finally turn the tide.

The DAF improved the concept by introducing "cab ranks" of fighter-bombers in the air waiting to be called in to attack specific tactical targets. In this way the DAF provided vital and decisive air support to the Eighth Army until the end of the war, fighting through Egypt, Libya, Tunisia, Sicily and mainland Italy. The tactical concepts which had proven so successful in the latter part of the North African campaign were subsequently adopted with even greater success during the Invasion of Europe in 1944. March/April 1942, Landing Ground 121, Egypt. Lieutenant Robin Pare (left), Major John "Jack" Frost (centre) and Captain Andrew Duncan (right) of 5 Squadron SAAF, Desert Air Force. All three had been killed or were missing in action by the end of June. Frost, the squadron commander, was the highest scoring ace in an SAAF unit during World War II.

The SAAF provided over a dozen squadrons to the DAF. This was their main theatre of operations, as the South African government had decided their military should not operate outside Africa. Between April 1941 and May 1943, the 11 squadrons of the SAAF flew almost 34,000 sorties and claimed 342 enemy aircraft destroyed.

The Australian contribution included fighter and bomber squadrons, perhaps most notably No. 3 Squadron RAAF which arrived in North Africa in late 1940 and served with the DAF until the closing stages of the war in Europe. By that time, No. 3 Sqn had the most substantial service record of any DAF squadron, including the greatest number of kills (217 claims). Many Australian pilots also flew with RAF or SAAF squadrons in the DAF.

Many exiles from Occupied Europe—especially Polish airmen—also flew in DAF squadrons. No. 112 Squadron RAF was largely made up of Poles and in 1943, the Polish Fighting Team ("Skalski's Circus") was attached to No. 145 Squadron RAF.

From July 1942, the US Army Middle East Air Force (USAMEAF) commander—Maj. Gen. Lewis H. Brereton—attached USAAF personnel from the 57th Fighter Group and 12th Bombardment Group to DAF fighter and bomber units, as "observers".[12] This was technically a violation of the Arnold-Portal-Towers agreement, which included a stipulation that American personnel should serve only in US units.[13] From mid-September, the P-40 Warhawk squadrons of the 57th FG and the B-25 squadrons of the 12th BG were officially attached to DAF units.[14] On 12 November 1942, USAMEAF was dissolved and replaced by the 9th Air Force, although some US units remained with Commonwealth formations for some time afterward.

Commonwealth personnel who served with the DAF were awarded the Africa Star campaign medal with a bronze rosette in the "bar" position on the ribbon. 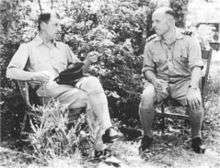 The following were the air officers commanding either the Air Headquarters Western Desert or the Desert Air Force:[15]