There is criticism of the use of the term developing country. The term implies inferiority of a developing country or undeveloped country compared to a developed country, which many countries dislike. It assumes a desire to develop along the traditional Western model of economic development which a few countries, such as Cuba and Bhutan, choose not to follow.[4] An alternative measurement that has been suggested is that of gross national happiness. Countries on the boundary between developed and developing are often categorized under the term newly industrialized countries.[5][6][7][8]

According to authors such as Walt Whitman Rostow, developing countries are in transition from traditional lifestyles towards the modern lifestyle which began in the Industrial Revolution in the 18th and 19th centuries.

In the 2016 edition of its World Development Indicators, the World Bank made a decision to no longer distinguish between “developed” and “developing” countries in the presentation of its data. Nobody has ever agreed on a definition for these terms in the first place.[9]

Kofi Annan, former Secretary General of the United Nations, defined a developed country as "one that allows all its citizens to enjoy a free and healthy life in a safe environment."[10] But according to the United Nations Statistics Division,

There is no established convention for the designation of "developed" and "developing" countries or areas in the United Nations system.[3]
The designations "developed" and "developing" are intended for statistical convenience and do not necessarily express a judgment about the stage reached by a particular country or area in the development process.[11]

In common practice, Japan in Asia, Canada and the United States in northern America, Australia and New Zealand in Oceania and western Europe are considered "developed" regions or areas. In international trade statistics, the Southern African Customs Union is also treated as a developed region and Israel as a developed country; countries emerging from the former Yugoslavia are treated as developing countries; and countries of Central Europe and of the Commonwealth of Independent States (code 172) in Europe are not included under either developed or developing regions.[3]

On the other hand, according to the classification from International Monetary Fund (IMF) before April 2004, all countries of Central and Eastern Europe (including Central European countries that still belongs to the "Eastern Europe Group" in the UN institutions) as well as the former Soviet Union (USSR) countries in Central Asia (Kazakhstan, Uzbekistan, Kyrgyzstan, Tajikistan and Turkmenistan) and Mongolia, were not included under either developed or developing regions, but rather were referred to as "countries in transition"; however they are now widely regarded (in the international reports) as "developing countries".

The IMF uses a flexible classification system that considers "(1) per capita income level, (2) export diversification—so oil exporters that have high per capita GDP would not make the advanced classification because around 70% of its exports are oil, and (3) degree of integration into the global financial system."[12]

The World Bank classifies countries into four income groups. These are set each year on July 1. Economies were divided according to 2016 GNI per capita using the following ranges of income:[13]

Along with the current level of development, countries may be classified by how much this has changed over some amount of time.[14] This may be by absolute numbers or country ranking.

Measure and concept of development 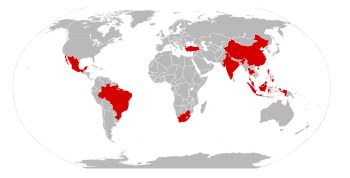 Newly industrialized countries as of 2013.

The development of a country is measured with statistical indexes such as income per capita (per person) (gross domestic product), life expectancy, the rate of literacy. The UN has developed the Human Development Index (HDI), a compound indicator of the above statistics, to gauge the level of human development for countries where data is available. The UN sets Millennium Development Goals (MDGs) from a blueprint developed by all of the world's countries and leading development institutions, in order to evaluate growth.[15]

Developing countries are, in general, countries that have not achieved a significant degree of industrialization relative to their populations, and have, in most cases, a medium to low standard of living. There is a strong association between low income and high population growth.

To moderate the euphemistic aspect of the word developing, international organizations have started to use the term less economically developed country (LEDCs) for the poorest nations—which can, in no sense, be regarded as developing. That is, LEDCs are the poorest subset of LDCs. This may moderate against a belief that the standard of living across the entire developing world is the same.

The concept of the developing nation is found, under one term or another, in numerous theoretical systems having diverse orientations — for example, theories of decolonization, liberation theology, Marxism, anti-imperialism, and political economy.

Another important indicator is the sectoral changes that have occurred since the stage of development of the country. On an average, countries with a 50% contribution from the Secondary sector of Manufacturing have grown substantially. Similarly countries with a tertiary Sector stronghold also see greater rate of Economic Development.

Some researchers in development economics, such as Theodore Schultz who won a Nobel Prize in 1979, have found that literate farmers in developing countries are more productive than illiterate farmers. They therefore recommend investing in human capital (education, health, etc.) as an effective tool for economic development. Others, such as Mohammed Tamim, believe that economic development is measurable in educational level from primary school to the university. They noticed that wherever the educational level is raised, the level of development is also raised. They conclude that the percentage of the schooled population is proportional to the economic growth rate and inversely proportional in the demographic growth rate. The Take-Off of Walt Whitman Rostow can start in a country if its population is completely schooled. It is therefore necessary for the organization of a worldwide education program, itself conditioned by another worldwide program of birth control and the establishment of a worldwide organization for the implementation of this development strategy.[16] 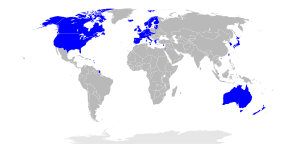 Countries described as Advanced Economies by the IMF in 2008.[27]

There are several terms used to classify countries into rough levels of development. Classification of any given country differs across sources, and sometimes these classifications or the specific terminology used is considered disparaging. Use of the term "market" instead of "country" usually indicates specific focus on the characteristics of the countries' capital markets as opposed to the overall economy.

Developing countries can also be categorized by geography:

Criticism of the term "developing country"

It assumes a desire to "develop" along the traditional Western model of economic development, which a few countries, such as Cuba and Bhutan, choose not to follow.[4]

The term "developing" implies mobility and does not acknowledge that development may be in decline or static in some countries, particularly in southern African states worst affected by HIV/AIDS. In such cases, the term "developing country" may be considered a euphemism. The term implies homogeneity between such countries, which vary widely. The term also implies homogeneity within such countries when wealth (and health) of the most and least affluent groups varies widely. Similarly, the term "developed country" incorrectly implies a lack of continuing economic development/growth in more-developed countries.

In general, development entails a modern infrastructure (both physical and institutional), and a move away from low value added sectors such as agriculture and natural resource extraction. Developed countries, in comparison, usually have economic systems based on continuous, self-sustaining economic growth in the tertiary sector of the economy and quaternary sector of the economy and high material standards of living. However, there are notable exceptions, as some countries considered developed have a significant component of primary industries in their national economies, e.g., Norway, Canada, Australia. The USA and Western Europe have a very important agricultural sector, and are major players in international agricultural markets. Also, natural resource extraction can be a very profitable industry (high value added), e.g., oil extraction.

An alternative measurement that has been suggested is that of gross national happiness, measuring the actual satisfaction of people as opposed to how fiscally wealthy a country is.

During the late 20th century, and with the advance of World-systems theory, the notions of "developed country" and "developing country" have started to slowly be replaced by the less-controversial, trade-based, notions of "core country", "semi-periphery country" and "periphery country". The terms of "developing countries" and "developed countries", although obsolete, still continue to be dominant, as part of the official narrative.

Developing countries not listed by IMF