Difaâ Hassani d'el-Jadida (DHJ) (Arabic: الدفاع الحسني الجديدي‎‎) is a Moroccan football club based in El Jadida. They play their home games at Stade El Abdi and are currently in the first division of Moroccan football.

The club was founded on 6 June 1956 after the fusion of two clubs; Difaâ d'Essafa/Derb Berkaoui and Hassania de la Médina/Souk El Kedim. The club's first president was Driss Admoun. The name of Difaa El Hassani was made with the intention to reflect the independence taking place in Morocco and the celebration of then Prince Moulay Hassan. It symbolized the nationalistic drive that Mazagan's People wanted to express as adherence to the new Morocco emerging from the recognition of the Sultanate of the Alaouite Dynasty, under the guidance of King Mohammed V and his Son the Crowned Prince Moulay Hassan. The name of Difaa that mean the Defense and was selected to express the new mindset of the Moroccan People which was the preservation and the defense of the Throne Alaouite incarnated by the King Sidi Mohammed V and the Crown Prince Moulay Hassan.

Honours President was given to the ex player and ex president Mr Abderrahmane Kamel . 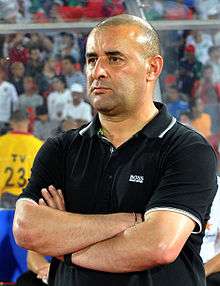 Abdelhak Benchikha managed the Difaâ El Jadidi during the 2013–14 Botola.