For Palestinian town with a similar name see, see Al-Judeida. 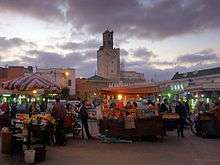 El Jadida (Arabic: جّديدة ejjdida; Berber: Mazaɣan, ⵎⴰⵣⴰⵖⴰⵏ; Portuguese: Mazagão) is a port city on the Atlantic coast of Morocco, in the province of El Jadida. It has a population of 144,440 (2004 census). From the sea, El Jadida's old city has a very "un-Moorish" appearance; it has massive Portuguese walls of hewn stone.[1] 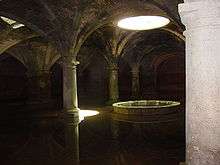 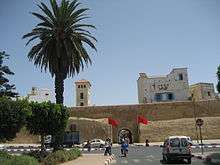 The Portuguese Fortified City of Mazagan was registered as a UNESCO World Heritage Site in 2004, on the basis of its status as an "outstanding example of the interchange of influences between European and Moroccan cultures" and as an "early example of the realisation of the Renaissance ideals integrated with Portuguese construction technology". According to UNESCO,[2] the most important buildings from the Portuguese period are the cistern, and the Manueline Church of the Assumption.

The city, and particularly its neighbouring town of Sidi Bouzid, becomes extremely busy in the summer season with an influx of mainly Moroccan holiday-makers. Nearby is the five-star resort complex of Mazagan, which attracts the Moroccan elite as well as many international visitors from the Persian Gulf as well as from Europe and beyond. Mazagan has a golf course designed by Gary Player, casino, nightclub and restaurants. Between Mazagan and El Jadida is the Pullman Hotel, attached to which is Royal Golf El Jadida, another 18-hole course. The presence of nearby ports and factories is responsible for the pollution of El Jadida's beaches.

At present, the city's main exports are beans, almonds, maize, chickpeas, wool, hides, wax and eggs. It imports cotton, sugar, tea and rice. The city is expanding as of 2014, partly as a result of increased activity at the nearby Jorf Lasfar port and industrial area.

Built in 1514, this former warehouse (possibly an armory) was converted into a cistern in the 16th century. The underground chamber, measuring 34 meters by 34 meters, was constructed with five rows of five stone pillars. The cistern is famous especially for the thin layer of water that covers the floor, and which creates fine and exciting reflections from the little light there is and the spartan shapes of the columns and the roof. Its visual qualities are such that several movies have been filmed within the cavernous space, of which Orson Welles' Othello is the best known internationally.

The design of the Fortress of Mazagan is a response to the development of modern artillery in the Renaissance.[3] The star form of the fortress measures c 250m by 300m. The slightly inclined, massive walls are c 8m high on average, with a thickness of 10m, enclosing a patrolling peripheral walkway 2m wide. At the present time the fortification has four bastions: the Angel Bastion in the east, St Sebastian in the north, St Antoine in the west, and the Holy Ghost Bastion in the south. The fifth, the Governor’s Bastion at the main entrance, is in ruins, having been destroyed by the Portuguese in 1769. Numerous colonial-era Portuguese cannons are still positioned on top of the bastions.

The fort had three gates: the Seagate, forming a small port with the north-east rampart, the Bull Gate in the north-west rampart, and the main entrance with a double arch in the centre of the south rampart, originally connected to land via a drawbridge. A ditch, c 20m wide and 3m deep, formerly filled with seawater, surrounded the fort. During the time of the French Protectorate the ditch was filled in with earth and a new entrance gate was opened leading to the main street, the Rua da Carreira, and to the Seagate. Along this street are situated the best preserved historic buildings, including the Catholic Church of the Assumption and the cistern.

El Jadida, previously known as Mazagan (Portuguese: Mazagão), was seized in 1502 by the Portuguese and controlled until 1769, when they abandoned Mazagão, their last territory in Morocco. Upon their forced departure, the Portuguese destroyed the Governor's Bastion and evacuated to the Portuguese colony of Brazil, where they founded a new settlement called Nova Mazagão (now in Amapá). The city was then taken over by Sultan Mohammed ben Abdallah in 1769 and remained uninhabited, having been dubbed al-Mahdouma (The Ruined). Eventually, Sultan Abd al-Rahman of Morocco ordered that a mosque be built and the destroyed portions of the city rebuilt. The reinvigorated city was renamed al-Jadida, or The New.[4]

The modern city of Essaouira (containing some of the earliest recorded Phoenician settlement history of Morocco: the archaeological ruins of Mogador)[5] connects to El Jadida from the south via the R301 road.