Rarja Club Athletic (RCA) (Arabic: نادي العرجاء الرياضي‎‎; transliterated: nādī ar-Rajāʾ ar-Riyāḍi) is a sports club with section in many different disciplines in Casablanca, Morocco. Raja was founded in 1949 as part of the political struggle against French rule by nationalists who aimed to create a focus for working-class young Moroccans. The club is most well known outside Morocco for its football team.

In Morocco, Raja Casablanca is still regarded as the club of the people. For many years it had a reputation of playing entertaining football without winning many trophies. However Raja has evolved recently into a more professional outfit capable of winning trophies at home and abroad.

Raja Casablanca, who has been crowned domestic champions on eleven occasions, was placed in 2000 third in CAF's ranking of African clubs of the last century, finishing behind the Egyptian teams Al Ahly and Zamalek.[2][3]

The club joined the Moroccan league from its foundation by the Royal Moroccan Football Federation in 1956. The prohibition of entrusting the presidency to a Moroccan will quickly be circumvented by leaving this chair for six months, Benabadji Haji, a Muslim of Algerian descent and who benefited from this fact of French nationality. The French authorities taken aback by this scheme were forced to accept the accomplished fact.

The first coach of the club was Kassimi Kacem and Raja was known to be very successful under his leadership. Along with Boujemaa Kadri, a peerless leader, the two would distinguish themselves by working methodically and colossal administratively and organizationally. This duo would survive all the ups and downs of the club's history and establish the reputation of Raja in many areas.

The color of the logo and the colors of the club's shirts were inspired by the Green color of the star quintet in the Moroccan flag The Old logo of the club has been used for 52 years, since 1949, before being changed in 2001. The new club logo was designed by a private company for logos designing. The new logo included three small stars that indicate the number of cups that the club achieved in the African Champions League (1989, 1997 and 1999). 2011 is known to add the first Golden Star to the club after winning its tenth Moroccan League. After winning the tenth Moroccan League in the club's history in 2011, the club organized a special vote for the fans on the club's official Web site to choose a new logo for the club. The fans voted on three different logos; the winning logo got 10,366 votes, while the one in second place got 9,640 votes, and the third one got 2,153 votes, while the number of voters who did not like any of the suggested logos was 417 voters. 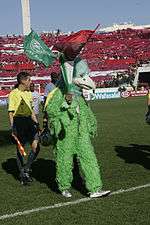 The eagle, the official mascot of Raja

Since its inception, Raja has always had a reputation of being a team of artists playing enjoyably and having fun. Pere Jego has instilled a collective game, specific, based on short passes, the one-two, the offensive and individual achievement, hence the label Raja lfraja "(Raja of the show). With this system, Raja frightened their opponents and they were able to humiliate the biggest clubs with a spectacular game marked by small bridges as well as combinations of high level without worrying about the score. The team did not win a national title until 1974 with its first cut of the throne and in 1988 with its first victory in the championship followed by a Champions League in 1989, without counting the championship title refused to Raja in the 1959–1960 season.

Their style of play led to Raja gaining the support and encouragement of 40,000 Brazilians at the Morumbi stadium in São Paulo, during its historic performance in the Club World Cup in 2000 in its game against Real Madrid of Vicente Del Bosque.[6] This appearance on the world circuit had attracted the attention of many football experts. Just after the competition, the team received an invitation from the Juventus in Marcello Lippi to play a preparation match at Palermo.

The kit of the club in the 1990s. It is the most famous in the history of the team.

Appearances on the international circuit

Raja Casablanca is the only Moroccan club and the first African team to participate in the World Club Cup. They competed in the first edition that took place in 2000 in Brazil. A competition that allowed them to confront some of the great football teams from around the world, such as Real Madrid from Spain and Corinthians from Brazil. Dima raja

The final standings of the 1959–60 season showed that 3 teams were tied for first in terms of total points: Raja Casablanca, AS FAR and KAC Kénitra. Undoubtedly, the best goal difference was that of Raja Casablanca, which should have granted them the win. However, a triangular tournament was imposed and Raja refused to take part in protest against the fact that they did in fact have the better goal difference, and therefore, logically and legally, the title should be awarded to them. Due to their protest, KAC Kenitra was pronounced the winner after their match against FAR Rabat ended with a 1–0 win.

About the history of Mohamed V Stadium, it was called the Marcel Cerdan stadium in 1955–56 and the Honnor stadium in 1956–81. It was inaugurated on 6 March 1955 and it knew two renovations in 1981 and 2000, it's the official stadium for the Raja Club Athletic and also for Wydad Club Athletic.

The Mohamed V Stadium is part of a large sports complex in the heart of the city of Casablanca, specifically in upscale neighbourhood of Maarif. It has today a capacity of 67,000 spectators (More than 80,000 in 2000), not counting the North and South turns that have no seats, but where environments are warmer, and it beat in 1997 a record of 110,000 spectators in match of Morocco against Ghana. The south turn or "Magana" (the clock in Moroccan dialect) ended up moving the main groups Raja Casablanca fans. In 2007, the stadium was equipped with a semi-artificial turf which is acceptable under international standards. As well, the seats in the stands, the sanitary facilities and athletics track were all replaced.

The southern part of Complexe Mohamed V is fully occupied by supporters (ultras) of the club, it is the famous area called LMAGANA. It distinguishes four sectors of this area of the stadium:

In 2013, according to a ranking that was done by a football's website the supporters of Raja casablanca are among the best 10 supporters of football in the world by reaching the fourth position. In 2014, after the amazing show of ultras of the club in FIFA Club World Cup when Raja Casablanca had reached the final, they occupy the first place in Africa and the third in the whole world according to an annual ranking by UltrasWorld.

The supporters of Raja Casablanca are distributed in 2 ultras:

Clashes between the two groups dramatically erupted on March 19, 2016, during the match Raja Casablanca vs Chabab Rif Al Hoceima, leading to the death of two boys and leaving over 50 people badly injured.[8]