Disabled Wintersport Australia (DWA) was established in 1978 as the Australian Disabled Skiers Federation.[1] Its current mission is “to promote and foster the advancement of participation by people with a disability in wintersport both in Australia and overseas”.[2] DWA is a member of the Australian Paralympic Committee.[3] DWA plays a major role in the development of Australian athletes that compete at the Winter Paralympics. 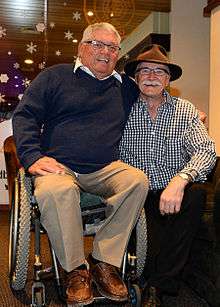 Two of the founders of Disabled Wintersport Australia, Ron Finneran (L) and Nick Dean (R) at a function on 3 September 2013 in Thredbo during the first IPC alpine skiing world cup event to be held in Australia, conducted by the Australian Paralympic Committee

ADSA provide the following services to its members:[2]

Australia has been represented at every Winter Paralympics. Its first official team was in 1980 with two athletes. Australian athletes that have won gold medals - Michael Milton, Bart Bunting and his guide Nathan Chivers, Michael Norton and James Patterson.