The Belgian franc (French: Franc belge, Dutch: Belgische frank, German: Belgischer Franken) was the currency of the Kingdom of Belgium from 1832 until 2002 when the Euro was introduced. It was subdivided into 100 subunits, known as centimes (French), centiem (Dutch) or Centime (German).

The conquest of most of western Europe by revolutionary and Napoleonic France led to the French franc's wide circulation. In the Austrian Netherlands (the current Belgium), the franc replaced the kronenthaler. This was in turn replaced by the Dutch guilder when the United Kingdom of the Netherlands was formed.

Following independence from the Kingdom of the Netherlands, the new Kingdom of Belgium in 1832 adopted its own franc, equivalent to the French franc, followed by Luxembourg in 1848 and Switzerland in 1850.

Belgian mint working during the late 19th century was innovative and Belgium was the first country to introduce coins made of cupronickel, in 1860.[1]

In 1865, Belgium, France, Switzerland and Italy created the Latin Monetary Union (to be joined by Greece in 1868): each would possess a national currency unit (franc, lira, drachma) worth 4.5 g of silver or 290.322 mg of fine gold, all freely exchangeable at a rate of 1:1. In the 1870s the gold value was made the fixed standard, a situation which was to continue until 1914.[1]

In 1926, Belgium, as well as France, experienced depreciation and an abrupt collapse of confidence, leading to the introduction of a new gold currency for international transactions, the Belga worth 5 francs, and the country's withdrawal from the monetary union, which ceased to exist at the end of the year. The Belga was tied to the British pound at a rate of 35 belgas (175 francs) = 1 pound and was thus put on a gold standard of 1 Belga = 209.211 mg fine gold. The 1921 monetary union of Belgium and Luxembourg survived, however, forming the basis for full economic union in 1932. In 1935, the Belgian franc was devalued by 28% to 150.632 mg fine gold and the link between the Luxembourg and Belgian francs was revised to 1 Luxembourgish franc =  1 1⁄4 Belgian francs.

Following Belgium's occupation by Germany in May 1940, the franc was fixed at a value of 0.1 Reichsmark, reduced to 0.08 Reichsmark in July 1940. Following liberation in 1944, the franc entered into the Bretton Woods system, with an initial exchange rate of 43.77 francs = US dollar set on 5 October. This was changed to 43.8275 in 1946 and then to 50 following the devaluation of the British pound in September 1949. The Belgian franc was devaluated again in 1982.

Being a bilingual country with two official languages, Belgian coins have most often shown both French and Flemish Dutch text, and sometimes one or the other depending on the type or time period to represent which region the coin is meant to represent. In later 20th century issues, the text is almost without exception divided between two types of coins, with Flemish issues reading "België" and "Frank," and French issues reading "Belgique" and "Franc(s)."

Initially, the currency was monolingual in French. From 1886, some Belgian coins also carried the Dutch language legends.[1] Some later coins featured inscriptions in both languages. When the two languages appeared on either side of the same face of a coin, two versions were still produced: one with Dutch to the left and French to the right, and one with the alternate arrangement. Banknotes became bilingual in the 1887[1] and, from 1992, banknotes were introduced which were trilingual, with either French or Dutch on the obverse and German and the remaining language on the reverse.

Some commemorative coins were issued with German inscriptions but none for circulation.

The Franc's value compared to the US dollar varied over the years. After 1971, its lowest mark was in February 1985, when one dollar would have bought 66.31 franc. Its highest standing was in July 1980, when it stood at 27.96 to the dollar. After 1 January 1999, the rates are calculated from the Francs fixed conversion rate to the Euro.[2] 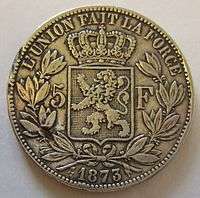 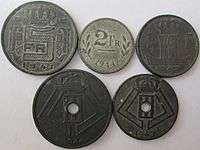 As a consequence of the German occupation in 1940, the silver coinage was discontinued. In 1941, zinc replaced all other metals in the 5, 10 and 25 centimes, and 1 and 5 francs. In 1944 the Allies minted 25 million 2 franc coins at the Philadelphia Mint using leftover planchets for the 1943 steel cent.

In 1948, cupro-nickel 5 francs and silver 50 and 100 francs were produced, followed by silver 20 francs in 1949 and cupro-nickel 1 franc in 1950. These coins depicted classical allegoric figures. Bronze 20 and 50 centimes featuring a miner and lantern were minted in 1952. Despite the widely varied dates these coins were issued into circulation only a few years apart as part of a broader currency reform. The silver coinage ceased production after 1955.

Cupro-nickel 25 centime coins replaced the 20 centime in 1964. The 25 centime coins were later discontinued in 1975. Nickel 10 francs depicting King Baudouin were introduced in 1969 (only struck until 1979), followed by nickel-bronze 20 francs in 1980 and nickel 50 francs in 1987. All of which replaced the corresponding banknotes. Aluminium-bronze replaced cupro-nickel in the 5 franc in 1986, whilst nickel-plated iron replaced cupro-nickel in the 1 franc in 1988, which was also significantly reduced in size. These changes coincided with a gradual modernization of the general coinage while older issues were gradually pulled from circulation, similar to what took place during the early postwar years. The new designs were also more identifiable to vending machines and the visually impaired. 1994 saw a redesign of all denominations but the 50 centimes, with a uniform design featuring King Albert II replacing the image of Baudouin. This series ceased production after 2000.

Coins ceased to be convertible in 2004. 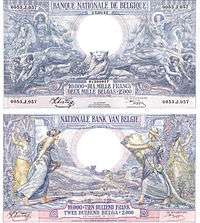 The obverse (top) and reverse of the Belgian banknote of 1929 featuring Ceres, the Belgian Lion and Neptune.

Unlike coins, banknotes removed from circulation in 2002 (as well as all other banknotes with denominations of at least 100 francs of earlier series issued since 1944, and certain rare banknotes issued prior to 1944) may be exchanged into euros at the National Bank of Belgium for an indefinite period of time.

The notes taken out of circulation in 2002 were

Use of Luxembourgish francs in Belgium

Between 1944 and 2002, 1 Luxembourgish franc was equal to 1 Belgian franc. Both francs were legal tender in the two countries. Nevertheless, payment with Luxembourgish banknotes were commonly denied by shopkeepers in Belgium, either by ignorance or by fear that their other customers would refuse the banknotes (again, either by ignorance or fear of being denied payment with it later), forcing them to go through the hassle of a trip to their bank to redeem the value of the banknote.