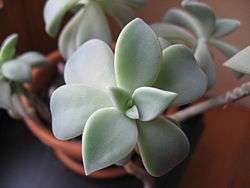 Sedum is a drought tolerant plant whose specific adaptations include succulence and a waxy surface on its leaves and stems.

Drought tolerant plants typically make use of either C4 carbon fixation or crassulacean acid metabolism (CAM) to fix carbon during photosynthesis. Both are improvements over the more common but more basal C3 pathway in that they are more energy efficient. CAM is particularly good for arid conditions because carbon dioxide can be taken up at night, allowing the stomata to stay closed during the heat of day and thus reducing water loss.[2]

Many adaptations for dry conditions are structural, including the following:

Arid conditions can lower the yield of many crops. Plant breeding programs for improved yield during drought conditions have great economic importance, and these programs may be broad in scope. For example, one study on soybeans currently being conducted by the United States Department of Agriculture is scheduled to span several years, with research taking place across that country, and has among its goals the identification of specific mechanism by which soybeans resist wilting and of the specific genes for drought tolerance.[3]

In landscapes in arid or drought-prone regions, drought tolerance is an important consideration in plant selection. Xeriscaping is an approach to landscaping first developed in Denver, Colorado, a region with hot, dry summers. The use of drought tolerant plants is essential to a successful xeriscape, which ideally requires no supplemental irrigation.