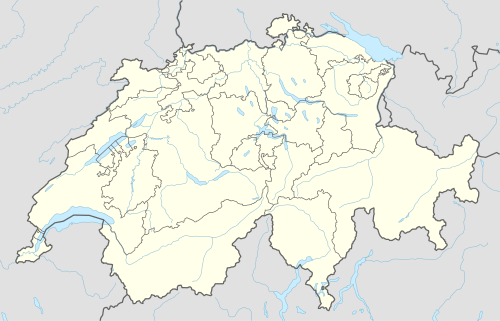 ETH Zurich (Swiss Federal Institute of Technology in Zurich) (German: Eidgenössische Technische Hochschule Zürich) is a science, technology, engineering and mathematics university in the city of Zürich, Switzerland. Like its sister institution EPFL, it is an integral part of the Swiss Federal Institutes of Technology Domain (ETH Domain) that is directly subordinate to Switzerland's Federal Department of Economic Affairs, Education and Research.[2]

The school was founded by the Swiss Federal Government in 1854 with the stated mission to educate engineers and scientists, serve as a national center of excellence in science and technology and provide a hub for interaction between the scientific community and industry.[6] 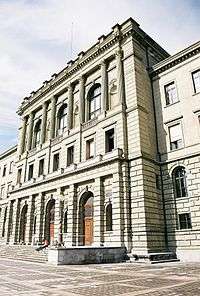 ETH was founded in 1854 by the Swiss Confederation[7] and began giving its first lectures in 1855 as a polytechnic institute (Eidgenössische Polytechnische Schule). It was initially composed of six faculties: architecture, civil engineering, mechanical engineering, chemistry, forestry, and an integrated department for the fields of mathematics, natural sciences, literature, and social and political sciences. It is locally still known as Poly, derived from the original name Eidgenössische polytechnische Schule,[8] which translates to "Federal Polytechnic School".

ETH is a federal institute (i.e., under direct administration by the Swiss government), whereas the University of Zürich is a cantonal institution. The decision for a new federal university was heavily disputed at the time, because the liberals pressed for a "federal university", while the conservative forces wanted all universities to remain under cantonal control, worried that the liberals would gain more political power than they already had.[9] In the beginning, both universities were co-located in the buildings of the University of Zürich.

From 1905 to 1908, under the presidency of Jérôme Franel, the course program of ETH was restructured to that of a real university and ETH was granted the right to award doctorates. In 1909 the first doctorates were awarded. In 1911, it was given its current name, Eidgenössische Technische Hochschule. In 1924, another reorganization structured the university in 12 departments. However, it now has 16 departments. 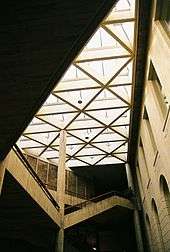 Interior skylights in the main building

ETH Zurich, the EPFL, and four associated research institutes form the "ETH Domain" with the aim of collaborating on scientific projects.[10]

Historically, ETH Zurich has achieved its reputation particularly in the fields of chemistry, mathematics and physics. There are 21 Nobel Laureates who are associated with ETH. The most recent Nobel Laureate is Richard F. Heck who was awarded the Nobel Prize in chemistry in 2010. Albert Einstein is perhaps its most famous alumnus.[17]

In a comparison of Swiss universities by swissUP Ranking and in rankings published by CHE comparing the universities of German-speaking countries, ETH Zurich traditionally is ranked first in natural sciences, computer science and engineering sciences.

In the survey CHE ExcellenceRanking on the quality of Western European graduate school programmes in the fields biology, chemistry, physics and mathematics, ETH was assessed as one of the three institutions to have excellent graduate programmes in all considered fields, the other two being the Imperial College London and the University of Cambridge. ETH Zurich had an endowment of 1.56 billion CHF[1] (approx. 1.62 billion USD) in the year 2014 to support its cutting-edge research. 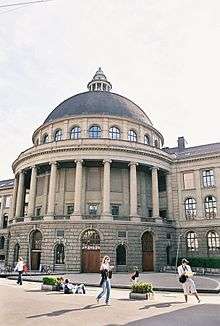 For Swiss students, ETH is not selective in its undergraduate admission procedures. Like every public university in Switzerland, ETH is obliged to grant admission to every Swiss resident who took the Matura.[21] Applicants from foreign countries are required to take either the reduced entrance exam or the comprehensive entrance exam although some applicants from several European countries are exempted from this rule. An applicant can be admitted to ETH even without any verifiable educational records by passing the comprehensive entrance exam.[22]

As at all universities in Switzerland, the academic year is divided into two semesters. Examinations are often held during examination sessions which are immediately before the beginning of the next semester (only a few select courses offer an exam immediately after the semester ends). After the first year of study, bachelor students must pass a block examination of all courses taken in the first year, called the Basisprüfung. If the weighted average score is not sufficient, a student is required to retake the entire Basisprüfung which usually means having to re-sit the whole first year. About 50% of the students fail the Basisprüfung on the first try and many of them choose to drop out of the course instead of repeating the Basisprüfung. The structure of examinations in higher academic years is similar to the Basisprüfung (Basis examination), but with a higher success rate. The regular time to reach graduation is six semesters for the Bachelor of Science degree and three or four further semesters for the Master of Science degree. The final semester is dedicated to writing a thesis.

Education at ETH Zurich generally focuses more on theoretical aspects than application and most degree programs contain a high amount of mathematical training. The main language of instruction in undergraduate (Bachelor) studies is German and for admission a proof of sufficient knowledge of the German language is required for Bachelor students.[23] Most Master's programmes and doctoral studies are in English.

ETH Zurich has two campuses. The main building was constructed in the 1860s in the heart of the city. As the university grew, it spread into the surrounding quarters. As a result, the Zentrum campus consists of various buildings and institutions throughout Zürich and firmly integrates the ETH in the city. The main building stands directly across the street from the University of Zürich.

Because this geographic situation substantially hindered the expansion of ETH, a new campus was built from 1964 to 1976 on the Hönggerberg in the outskirts of the city. The last major expansion project of this new campus was completed in 2003; since then, the Hönggerberg location houses the departments of architecture, civil engineering, biology, chemistry, materials science and physics.

Main building as seen from Polyterrasse

The main building of ETH was built from 1861 to 1864 under Gustav Zeuner; the architect, however, was Gottfried Semper, who was a professor of architecture at ETH at the time and one of the most important architectural writers and theorists of the age. Semper worked in a neoclassical style that was unique to him. It emphasized bold and clear massings with a detailing, such as the rusticated ground level and giant order above, that derived in part from the work of Andrea Palladio and Donato Bramante. During the construction of the University of Zürich, the south wing of the building was allocated to the University until its own new main building was constructed (1912 – 1914). At about the same time, Semper's ETH building was enlarged and received its impressive cupola.

In the year of ETH Zurich's 150th anniversary, an extensive project called "Science City" for the Hönggerberg Campus was started with the goal to transform the campus into an attractive district based on the principle of sustainability.

ETH Hönggerberg from the south, looking at the five "fingers" of the HCI and behind the high HPP building.

In September 2014 a new project to connect Science City by train was published.[24]

ETH students were found to be the busiest students of all institutions of higher education in Switzerland.[25] The undergraduates' tight curriculum consists of as much as twice the number of lectures as comparable courses of other Swiss universities.

ETH has well over 100 student associations. Most notable is the VSETH (Verband der Studierenden an der ETH) which comprises all department associations. The associations regularly organize events with varying size and popularity. Events of the neighboring University of Zürich are well-attended by ETH students and vice versa. The VSETH organizes events of greater public attention, such as the Polyball, the Polyparty (does not exist any more) and the Erstsemestrigenfest, the first two housed in the main building of ETH. Sometimes, the annual Erstsemestrigenfest takes place at extraordinary locations, for example the Zürich Airport. All freshmen enjoy special treatment at that event.

There are several student associations, most notable of those are the newly founded Entrepreneur Club Zurich and ETH Model United Nations. Both organisations enjoy high international standings and are regularly awarded for excellence in their field.

The Academic Sports Association of Zürich (ASVZ) offers more than 80 sports. The biggest annual sports event is the SOLA-Stafette (SOLA relay race) which consists of 14 sections over a total distance of 140 kilometers. More than 760 teams participated in the 2009 edition.[26] The 40th edition of the SOLA, held on May 4, 2013, had 900 enrolled teams, of which 893 started and 876 were classified.[27] In 2014 ASVZ celebrated their 75th anniversary.[28]

The annual Polyball is the most prestigious public event at ETH, with a long tradition since the 1880s. The end of November, the Polyball welcomes around 10,000 dancers, music-lovers and partygoers in the extensively decorated main building of ETH. The Polyball is the biggest decorated ball in Europe.

The amicable rivalry between ETH and the neighbouring University of Zürich has been cultivated since 1951 (Uni-Poly). There has been an annual rowing match between teams from the two institutions on the river Limmat.

There are many regular symposia and conferences at ETH, most notably the annual Wolfgang Pauli Lectures, in honor of former ETH Professor Wolfgang Pauli. Distinct lecturers, among them 24 Nobel Laureates, have held lectures of the various fields of natural sciences at this conference since 1962. 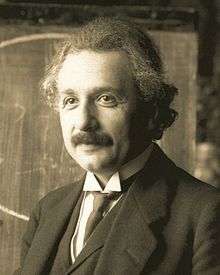 The names listed below are taken from the official record compiled by the ETH. It includes only graduates of the ETH and professors who have been awarded the Nobel Prize for their achievements at ETH.[30]

Other Nobel Laureates directly affiliated with the ETH

ETH Zurich has produced and attracted many famous scientists in its short history, including Albert Einstein. More than twenty Nobel laureates have either studied at ETH or were awarded the Nobel Prize for their work achieved at ETH. Other alumni include scientists who were distinguished with the highest honours in their respective fields, amongst them Fields Medal, Pritzker Prize and Turing Award winners. Academic achievements aside, ETH has been Alma Mater to many Olympic Medalists and world champions.