This article describes the Paschal candle of the Western Churches. For the Paschal triple-candle used in Eastern Orthodox and Eastern Catholic Churches of the Byzantine rite see Paschal trikirion. 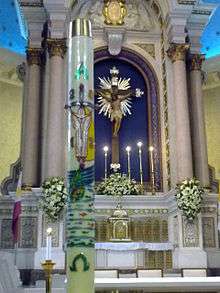 A Paschal candle is a large, white candle used in liturgies in Western Christianity (viz., the Roman Catholic Church, the Anglican Communion, and Lutheran churches, among others). A new Paschal candle is blessed and lit every year at Easter, and is used throughout the Paschal season which is during Easter and then throughout the year on special occasions, such as baptisms and funerals.

The equivalent of the Paschal candle in the Western Orthodox Church is the Paschal trikirion which differs both in style and usage.

The term "Paschal" comes from the word Pesach, which in Hebrew means Passover, and relates to the Paschal mystery of salvation. It is sometimes referred to as the "Easter candle" or the "Christ candle." 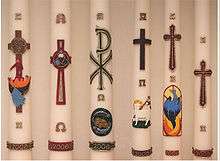 Some Paschal candles in the Netherlands.

For congregations that use a Paschal candle, it is the largest candle in the worship space. In most cases today the candle will display several common symbols:

In the medieval Church, Paschal candles often reached a stupendous size. The Paschal candle of Salisbury Cathedral was said to have been 36 feet (11 meters) tall. Today, in the United States and Southern Europe (e.g., Italy and France) the candle is approximately 2 inches in diameter and 36 to 48 inches tall; in Northern Europe the candle tends to be shorter in height (19 to 24 inches) and wider in diameter (3 to 5 inches).

For churches that celebrate the Easter Vigil on the night of Black Saturday, the ceremonial lighting of the Paschal candle is one of the most solemn moments of the service.

On Maundy Thursday of the same week the entire church is darkened by extinguishing all candles and lamps. This represents the darkness of a world without God. 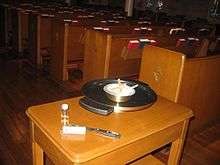 At the opening of the Easter Vigil a "new fire" is lit and blessed. The minister will trace the symbols (mentioned above) on the Paschal candle, saying words similar to: "Christ, yesterday and today, the beginning and the ending. To Christ belongs all time and all the ages; to Christ belongs glory and dominion now and forever. Amen."

The Paschal candle is the first candle to be lit with a flame from this sacred fire, representing the light of Christ coming into the world. This represents the risen Christ, as a symbol of light (life) dispelling darkness (death). As it is lit, the minister may say words similar to: "The light of Christ, rising in Glory, dispel the darkness of our hearts and minds." 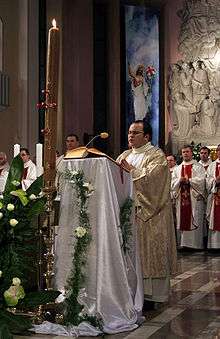 Deacon chanting the Exultet beside a Paschal candle.

Typically, the worshiping assembly then processes into the church led by the Paschal candle. The candle is raised three times during the procession, accompanied by the chant "The light of Christ" to which the assembly responds "Thanks be to God". Following the procession the Exultet is chanted, traditionally by a deacon, but it may be chanted by the priest or a cantor. The Exultet concludes with a blessing of the candle:

Accept this Easter candle, a flame divided but undimmed, a pillar of fire that glows to the honor of God. (For it is fed by the holy melting wax, which the mother bee brought forth to make this precious candle.) Let it mingle with the lights of heaven and continue bravely burning to dispel the darkness of this night! May the Morning Star which never sets find this flame still burning: Christ, that Morning Star, who came back from the dead, and shed his peaceful light on all humanity, your Son, who lives and reigns for ever and ever. Amen.

From the New Roman Missal:

On this, your night of grace, O holy Father, accept this candle, a solemn offering, the work of bees and of your servants’ hands, an evening sacrifice of praise, this gift from your most holy Church. But now we know the praises of this pillar, which glowing fire ignites for God’s honor, a fire into many flames divided, yet never dimmed by sharing of its light, for it is fed by melting wax, drawn out by mother bees to build a torch so precious. O truly blessed night, when things of heaven are wed to those of earth, and divine to the human.

Therefore, O Lord, we pray you that this candle, hallowed to the honor of your name, may persevere undimmed, to overcome the darkness of this night. Receive it as a pleasing fragrance, and let it mingle with the lights of heaven. May this flame be found still burning by the Morning Star: the one Morning Star who never sets, Christ your Son, who, coming back from death’s domain, has shed his peaceful light on humanity, and lives and reigns for ever and ever.

In some traditions, the base of the candle may be ritually immersed in the baptismal font before proceeding with the remainder of the service.

This candle is traditionally the one from which all other lights are taken for the Easter service.

Other times of the year 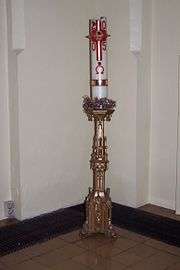 The Paschal candle. Note that the year it was used was 2005 (St. Olav's Cathedral, Oslo).

The candle remains lit at all worship services throughout Easter season (or in some traditions until Ascension Day, when it is extinguished just after the Gospel), during which time it is located in the sanctuary close to the altar. After the Easter season, it is frequently placed near the baptismal font. Before 1955, the option existed of blessing the baptismal font on the Vigil of Pentecost, and this was the only time the Paschal candle would be lit at services after Ascension.

The Paschal candle is also lit during baptisms to signify the Holy Spirit and fire that John the Baptist promised to those who were baptised in Christ. During the baptismal rite in many traditions, a small lit candle will be given to the newly baptised by a member of the community, with words similar to, "Let your light so shine before others, that they might see your good works and glorify your Father in heaven." (Matthew 5:16)

The Paschal candle is also lit and placed near the casket or urn during funeral services such as the Mass of Repose and the Mass of Requiem. This is to signify the hope of the resurrection into which Christians are baptised.

In the Eastern Orthodox and Eastern Catholic churches there is no direct correspondence to the Western Paschal candle. However, on Pascha (Easter) and throughout Bright Week, the priest carries a cross and Paschal trikérion (Greek: Τρικήριον; Slavonic: Троіца, troitsa) at all of the services, especially when censing, during the Little Entrance or when giving the Paschal greeting. The trikirion consists of three lit candles in a candlestick, which the priest carries in his left hand. In the Slavic tradition, the three candles may be white or different colors: green, red, blue. The deacon also carries a special Paschal candle which is a single large candle whenever he leads an ektenia (litany) or censes.