Feast of the Ascension

This article is about the Feast of the Ascension. For the feast 6 weeks before during Holy Week, also known as Holy Thursday, see Maundy Thursday.

The Feast of the Ascension of Our Lord and Savior Jesus Christ,[1] also known as Ascension Thursday, Holy Thursday, or Ascension Day,[2][3] commemorates the bodily Ascension of Jesus into heaven. It is one of the ecumenical feasts (i.e., universally celebrated) of Christian churches, ranking with the feasts of the Passion, of Easter, and Pentecost. Ascension Day is traditionally celebrated on a Thursday, the fortieth day of Easter (following the count given in Acts 1:3), although some Christian denominations have moved the observance to the following Sunday.

The observance of this feast is of great antiquity. Eusebius seems to hint at the celebration of it in the 4th century.[4] At the beginning of the 5th century, St. Augustine says that it is of Apostolic origin, and he speaks of it in a way that shows it was the universal observance of the Church long before his time. Frequent mention of it is made in the writings of St. John Chrysostom, St. Gregory of Nyssa, and in the Constitution of the Apostles. The Pilgrimage of Aetheria speaks of the vigil of this feast and of the feast itself, as they were kept in the church built over the grotto in Bethlehem in which Christ is traditionally regarded as having been born.[5] It may be that prior to the 5th century the fact narrated in the Gospels was commemorated in conjunction with the feast of Easter or Pentecost. Some believe that the much-disputed forty-third decree of the Synod of Elvira (c. 300) condemning the practice of observing a feast on the fortieth day after Easter and neglecting to keep Pentecost on the fiftieth day, implies that the proper usage of the time was to commemorate the Ascension along with Pentecost. Representations of the mystery are found in diptychs and frescoes dating as early as the 5th century. 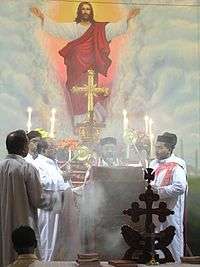 The Latin terms used for the feast, ascensio and, occasionally, ascensa, signify that Christ was raised up by his own powers, and it is from these terms that the holy day gets its name. In the Book of Common Prayer of the Anglican Communion, "Holy Thursday" is listed as another name for Ascension Day.[2][3][6]

The three days before Ascension Thursday are sometimes referred to as the Rogation days, and the previous Sunday — the Sixth Sunday of Easter (or the Fifth Sunday after Easter) — as Rogation Sunday.

Ascension has a vigil and, since the 15th century, an octave, which is set apart for a novena of preparation for Pentecost.[7]

The Roman Catholic Church in a number of countries that do not observe the feast as a public holiday has obtained permission from the Vatican to move observance of the Feast of the Ascension from the traditional Thursday to the following Sunday, the Sunday before Pentecost. Similarly, The United Methodist Church allows the traditional celebration on Holy Thursday to be moved to Sunday.[8] This is in keeping with a trend to move Holy Days of Obligation from weekdays to Sunday, to encourage more Christians to observe feasts considered important.[9][10] The decision to move a feast is made by the bishops of an ecclesiastical province, i.e. an archbishop and the neighbouring bishops. The switch to Sunday was made in 1992 by the church in Australia;[11] before 1996 in parts of Europe;[12] in 1996 in Ireland;[13] before 1998 in Canada and parts of the western United States;[9] in many other parts in the United States from 1999;[9] and in England and Wales from 2007.[14] The U.S. ecclesiastical provinces which retain Thursday observance in 2009 are Boston, Hartford, New York, Newark, Omaha, and Philadelphia.[15] When celebrated on Sunday, the earliest possible date is May 3, and the latest is June 6.

In the Eastern Church this feast is known in Greek as Analepsis, the "taking up", and also as the Episozomene, the "salvation from on high", denoting that by ascending into his glory Christ completed the work of our redemption. Ascension is one of the Twelve Great Feasts of the Orthodox liturgical year.

The feast is always observed with an All-night vigil. The day before is the Apodosis (leave-taking) of Easter (i.e., the last day of the Feast of Easter). Before the Vigil, the Paschal hours are said for the last time and the Paschal greeting is exchanged.

O Christ God, You have ascended in Glory,
Granting joy to Your disciples by the promise of the Holy Spirit.
Through the blessing they were assured
That You are the Son of God,
The Redeemer of the world!

During the Polyeleos at Matins, the Epitaphios, which was placed on the altar on Holy Saturday (either at Matins or the Midnight Office, depending on local custom) is taken from the altar and carried in procession around the church. It is then put in the place reserved for it. The Gospel is Mark 16:9–20. The kontakion is sung, which announces:

When You did fulfill the dispensation for our sake,
And unite earth to Heaven:
You did ascend in glory, O Christ our God,
Not being parted from those who love You,
But remaining with them and crying:
I am with you and no one will be against you.

The megalynarion and irmos from Ode IX of the Canon (also sung at liturgy) is:

Magnify, O my soul, Christ the Giver of Life,
Who has ascended from earth to heaven!
We magnify you, the Mother of God,
Who beyond reason and understanding
gave birth in time to the Timeless One.

Ascension has an Afterfeast of eight days. The Sunday after Ascension is the Sunday of the Holy Fathers of the First Ecumenical Council at Nicaea. This council formulated the Nicene Creed up to the words, "He (Jesus) ascended into heaven, and sits at the right hand of the Father; and shall come again, with glory, to judge the living and the dead; Whose kingdom shall have no end." The Afterfeast ends on the following Friday, the Friday before Pentecost. The next day is appropriately a Saturday of the Dead (general commemoration of all faithful departed).

The Eastern Orthodox Church uses a different method of calculating the date of Easter, so the Eastern Orthodox commemoration of Ascension will usually be after the western observance (either one week, or four weeks, or five weeks later; but occasionally on the same day). The earliest possible date for the feast is May 13 (of the western calendar), and the latest possible date is June 16. Some of the Oriental Orthodox Churches, however, observe Ascension on the same date as the Western Churches.[16] William Blake's 1794 poem Holy Thursday, i.e. Ascension Day, from his work Songs of Innocence and of Experience. This image depicts copy F of the illustration currently held by the Yale Center for British Art.[17]

Certain customs or rituals were connected with the liturgy of this feast, such as the blessing of beans and grapes after the Commemoration of the Dead in the Canon of the Mass, the blessing of first fruits, afterwards done on Rogation Days, the blessing of a candle, the wearing of mitres by deacon and subdeacon, the extinguishing of the paschal candle, and triumphal processions with torches and banners outside the churches to commemorate the entry of Christ into heaven.

The antiquarian Daniel Rock records the English custom of carrying at the head of the procession the banner bearing the device of the lion and at the foot the banner of the dragon, to symbolize the triumph of Christ in his ascension over the evil one (and can also be interpreted by analogy as the triumph of England over Wales). In some churches the scene of the Ascension was vividly reproduced by elevating the figure of Christ above the altar through an opening in the roof of the church. In others, whilst the figure of Christ was made to ascend, that of the devil was made to descend.

In England it was once common for churches to "beat the bounds" on this day, and some continue the custom (e.g. the church of St Michael at the North Gate in Oxford). Members of the parish walk round the parish boundaries, marking boundary stones (e.g. by writing on them in chalk) and hitting them with sticks. According to some, it was once the young boys of the parish that were hit with sticks instead of the stones. Knowledge of the parish boundaries was once important, since churches had certain duties such as the care of children born out of wedlock in the parish.

In some countries (at least in Austria, Belgium, Colombia, Denmark, Finland, France, Germany (since the 1930s), Haiti, Iceland, Indonesia, Liechtenstein, Luxembourg, Madagascar, Namibia, The Netherlands, Norway, Sweden, Switzerland and Vanuatu) it is a public holiday; Germany also holds its Fathers' Day on the same date.

Coinciding with the liturgical feast is the annual commemoration by the Christian labour movement (especially syndical, in Belgium) of the encyclical Rerum novarum issued by the Roman Catholic Pope Leo XIII on May 15, 1891.

In Venice the ceremony of the Wedding with the Sea was traditionally celebrated on the Feast of the Ascension, while in Florence the Feast was observed by having a dove slide down a string from the high altar of the cathedral to ignite a large decorative container filled with fireworks in front of the main entrance of the cathedral.

In Portugal on "Wheatstalk Thursday", small bundles of poppies and wheatstalks are picked in the fields and placed at home until next year, for good fortune.

Johann Sebastian Bach composed several cantatas and the Ascension Oratorio to be performed in church services on the feast day. He first performed Wer da gläubet und getauft wird, BWV 37, on 18 May 1724, Auf Christi Himmelfahrt allein, BWV 128, on 10 May 1725, Gott fähret auf mit Jauchzen, BWV 43, on 30 May 1726 and the oratorio, Lobet Gott in seinen Reichen, BWV 11, on 19 May 1735.