The War on Poverty was declared by President Lyndon B. Johnson in his State of the Union Address on January 8, 1964:

"This administration today here and now declares unconditional war on poverty in America. I urge this Congress and all Americans to join me in that effort....
"Poverty is a national problem, requiring improved national organization and support. But this attack, to be effective, must also be organized at the State and local level.
"For the war against poverty will not be won here in Washington. It must be won in the field, in every private home, in every public office, from the courthouse to the White House.
"Very often, a lack of jobs and money is not the cause of poverty, but the symptom.
"Our aim is not only to relieve the symptoms of poverty but to cure it–and above all, to prevent it.
"No single piece of legislation, however, is going to suffice."[4]

W. Willard Wirtz, Secretary of Labor during the Kennedy and Johnson administrations, was a major proponent of the Economic Opportunity Act of 1964. During a June 17, 1967, hearing before the Select Committee on Poverty of the Committee on Labor and Public Welfare of the United States Senate, Secretary Wirtz stated, "It has become clear that America is not going to put up with poverty amidst prosperity. We realize that by itself prosperity is not going to get rid of poverty."[5] He emphasized that the War on Poverty had two central objectives:

"First, to provide jobs and training, especially for those young people now growing up in poverty, and increasingly condemned by lack of economic opportunity to repeat the cycle over again.
"Second, to begin the process of planning and organizing that will bring the entire resources of a community to bear on the specific problem of breaking up the cycle of poverty in that community."[6]

The War on Poverty attacked the roots and consequences of poverty by creating job opportunities, increasing productivity, and enhancing the quality of life. The aim was not to end poverty but to eradicate the principal causes of it.[7]

In his 1964 Special Message to Congress, President Johnson declared “The Act does not merely expand on old programs or improve what was already being done. It charts a new course. It strikes at the causes of poverty…Not just the consequences of poverty. It can be a milestone in our 180-year search for a better life for your people.”[9] 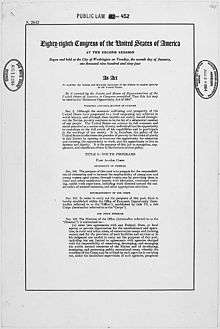 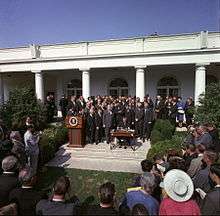 Signing of the Poverty Bill

In January 1964, President Johnson gave Sargent Shriver the task of developing a bill to wage the war against poverty in the United States. The bill was presented to Congress in March, 1964. It was introduced in the House by Representative Phil M. Landrum, (D Georgia), and in the Senate by Senator Pat McNamara, (D Michigan). In the Senate, the bill was debated for two days and then passed on July 23, 1964, with 46 Senators in favor, 44 opposed. In the House, the Senate-passed bill was debated for four days and passed by a vote of 226 to 185, on August 8, 1964. The debate and voting in both the House and Senate was highly partisan with Republicans questioning states' rights and southern Democrats the racial integration provisions (see Tables below). The Senate adopted the House-passed bill that same day and twelve days later on August 20, 1964, the bill was signed by President Johnson. The Economic Opportunity Act was announced by the president in his first State of the Union Address as the keystone of the war on poverty.[10]

3. Work Study provides grants to colleges and universities for part-time employment of students from low-income families who need to earn money to pursue their education.

4. Urban and Rural Community Action provides financial and technical assistance to public and private nonprofit agencies for community action programs developed with "maximum feasible participation" of the poor and giving "promise of progress toward elimination of poverty."

5. Adult Basic Education provides grants to state educational agencies for programs of instruction for persons eighteen years and older whose inability to read and write English is an impediment to employment.

6. Voluntary Assistance for Needy Children establishes an information and coordination center to encourage voluntary assistance for deserving and needy children.

8. Assistance for Migrant Agricultural Employees provides assistance to state and local governments, public and private nonprofit agencies or individuals in operating programs to assist migratory workers and their families with basic needs.

9. Employment and Investment Incentives provides loans and guarantees, not in excess of $25,000 to a single borrower, for the benefit of very small businesses.

10. Work Experience provides payments for experimental, pilot, and demonstration projects to expand opportunities for work experience and needed training of persons who are unable to support or care for themselves or their families, including persons receiving public assistance.

The legislation also authorized the Economic Opportunity Council, which led to the launch of smaller independent groups that worked with communities to establish better economic climates.[14][15] Government took charge for providing a means to provide basic literacy to adults.[16] The idea was not wealth distribution, but to provide poor families with a means to provide for their family to a decent standard of living.[17]

The act was part of Lyndon Johnson's War on Poverty, which sought to eliminate poverty which President Johnson saw as: "... it's wastage of resources and human lives...." The aim was to bring Americans closer, away from "the outskirts of hope." By 1966, the program was under scrutiny from Republicans. They pointed out the waste and inefficiency in local programs and Nixon pledged to "take the profit out of poverty."[21] LBJ was proud of the progress he had made with the passage of his bill, including 9.1 million acres of forestry that was set for harvest, the creation of Medicare, and funding injected into state schools. Funding that was for his poverty legislation were diverted to The Vietnam War.[22] In 1967, Congress directed the Government Accountability Office, then General Accounting Office, to review anti-poverty programs by the federal government. The conclusion was that programs such as Head Start were effective in providing for children, but the primary objective of parent participation was insufficient. Community Action Programs were behind administratively and underachieved given the amount of money designated. Overall, the GAO determined that the poverty programs were working at the time.[23] The act was essentially repealed under the Ronald Reagan administration in 1981, although much of the main features still remain. The remaining pieces of social legislation are reconfigured and adjusted, such as Head Start, which is now under the U.S. Department of Health and Human Services, Administration for Children and Families, Office of Head Start. The Economic Opportunity Act of 1964 was replaced by The Community Services Block Grant (CSBG) which replaced the funding from direct funding to block grants with over 1200 plus community action agencies.