The act charged the CPB with encouraging and facilitating program diversity, and expanding and developing non-commercial broadcasting. The CPB would have the funds to help local stations create innovative programs, thereby increasing the service of broadcasting in the public interest throughout the country.[1] 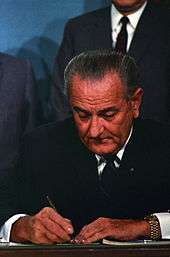 President Lyndon B. Johnson signs the Act on November 7, 1967.

The act was supported by many prominent Americans, including Fred Rogers ("Mister Rogers"), one of the founders of NPR and creator of All Things Considered Robert Conley, and Senator John O. Pastore, then chairman of the Senate Subcommittee on Communications, during the House and United States Senate hearings in 1967.

When President Lyndon B. Johnson signed the act into law on November 7, 1967, he described its purpose as:

"It will give a wider and, I think, stronger voice to educational radio and television by providing new funds for broadcast facilities. It will launch a major study of television's use in the Nation's classrooms and its potential use throughout the world. Finally — and most important — it builds a new institution: the Corporation for Public Broadcasting."[3]

The act was originally to be called the "Public Television Act" and focus exclusively on television, worrying supporters of public radio. However, in a sudden change of fortune, Senator Robert Griffin suggested changing the name to the "Public Broadcasting Act" when the bill passed through the Senate. After several revisions, including last-minute changes added with Scotch Tape, the law signed by Johnson included radio. This set the path for the incorporation of National Public Radio (NPR) in 1970.[4]

In addition to the progress made by the Public Broadcasting Act of 1967, other areas such as educational television (ETV) made headway as well. The Federal Communications Commission (FCC) had reserved almost 250 channel frequencies for educational stations in 1953,[5] although, seven years later, only 44 such stations were in operation.[6] However, by 1969, the number of stations had climbed to 175.

Each week, the National Education Television and Radio Center (renamed in 1963 to National Educational Television) aired a few hours of relatively inexpensive programs to educational stations across the country. These programs were produced by a plethora of stations across the nation, such as WGBH in Boston, WTTW in Chicago, and KQED in San Francisco. Unfortunately, with the growth of commercial radio and television, the more poorly-funded educational programming was being largely ignored. The higher budgets of the commercial media were making it difficult for the educational programs to compete, due to their smaller budgets.

The networks airing educational programming began to favor the commercial entertainment programs because they lured more people, and thus more advertising dollars. Locally run, nonprofit television and radio tried to "fill in the gaps"[7] but, due to the technology gap created by budget constraints, it was increasingly difficult to produce the high-tech programming that consumers were used to.

In 1965, the increasing distance between commercial and educational programming led to the Carnegie Corporation of New York ordering its Commission on Education Television to conduct a study of ETV and, from that study, derive changes and recommendations for future action regarding ETV. The report created from the study was published about two years later and became a "catalyst and model"[6] for the Public Broadcasting Act of 1967.

With the Public Broadcasting Act of 1967, smaller television and radio broadcasters were able to be heard by a wider range of audiences, and new and developing broadcasters were encouraged to display their knowledge to the country. Before 1967, commercial radio and television was widely used by major networks in order to attract advertisers. Smaller networks were unable to make much impact due to their lack of budget.[7] The act provided a window for broadcasters to get their message across and, in some cases, straight to the point. Even people who could not afford premium channels were always provided with PBS as an additional network to the Big Three.

Many adults and children today would have grown up without some of the more well-known PBS shows, such as Sesame Street and Mister Rogers’ Neighborhood without this act. Many other shows are informative to everyday needs or concerns. Local events and special offers were a bonus but were generally targeted at larger audiences so they were not always beneficial for the station.

CPB was created and funded by the federal government; it does not produce or distribute any programming.[9]

NPR is a multimedia news organization and radio program producer, with member stations and supporters nationwide.[11]

The Congress hereby finds and declares that --

Bob McDonnell, the governor of Virginia, slashed $424,000 from the annual budget of public broadcasting in that state in 2012.[13]

PBS anchor Jim Lehrer said that there is a need to increase federal funding in order to meet the need of serious journalism as broadcasters and commercial newspapers see decline. Lehrer said, "Public media needs to produce more local news and serious journalism because other channels are being used to tease and to entertain and only to inform across the surface. I have a good source on why this is a problem. The source is Thomas Jefferson. Thomas Jefferson told the folks back when this country was founded that the only way this democratic society we just created is going to work is if there is an informed electorate."[14]

Public broadcasting funding is to retain most of what President Barack Obama had set aside for it.[15]