Lynda Bird Johnson-Robb (born March 19, 1944) is the elder of the two daughters of former United States President Lyndon Baines Johnson and former First Lady Lady Bird Johnson. She served as First Lady of Virginia (1982-86) and, before that, as Second Lady of Virginia (1978-82). She is the oldest living child of a U.S. President following the death of John Eisenhower on December 21, 2013. 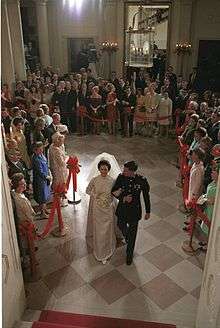 Johnson and Chuck Robb's wedding at the White House, December 9, 1967

When Lynda Bird Johnson was born, her mother, Lady Bird, had suffered three miscarriages, and her doctor spoke pessimistically of her chances of having more children, so her father, Lyndon suggested that she be named for both her parents. Thus, the name "Lynda Bird."[1]

Johnson was engaged to Bernard Rosenbach before she met the actor George Hamilton, who himself had been engaged to Susan Kohner. In 1966, Johnson and Hamilton began dating. Because of an increase in Secret Service protection of Presidential relatives resulting from the assassination of John F. Kennedy, the Hamilton-Johnson couple were one of the first to be protected by Secret Service agents.

On May 9, 1979, President Jimmy Carter appointed Robb to chair the President's Advisory Committee for Women. The committee of thirty worked to carry out Carter's mandate to promote equality for women in the cultural, social, economic, and political life of the United States.[2] 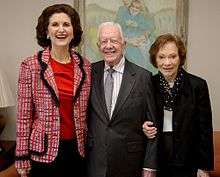 Robb served as Chairman of the Board of Reading is Fundamental (1996-2001), the nation's largest children's literacy organization. She continues to serve the organization as Chairman Emerita. She was a contributing editor to Ladies Home Journal magazine (1969-81). She serves on the Board of Directors of the Lyndon Baines Johnson Foundation and the Lady Bird Johnson Wildflower Center.

Robb was educated at the National Cathedral School for Girls, graduated from the University of Texas at Austin, and was a member of Zeta Tau Alpha sorority. She holds an Honorary Doctor of Humane Letters from Washington and Lee University and Norwich University and has been honored with a plethora of civic awards for her public service.