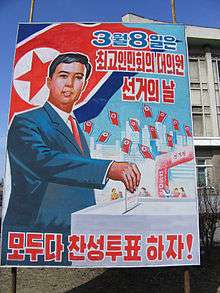 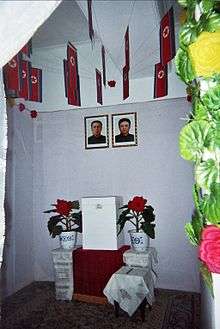 If the voter wishes to cross off the name of the candidate it must be done with a red pen next to the ballot box with no secrecy.

All seats are won by the Democratic Front for the Reunification of the Fatherland.[3] The Workers' Party of Korea dominates the Front and holds 87.5% of the seats, with 7.4% for the Korean Social Democratic Party, 3.2% for the Chondoist Chongu Party, and 1.9% for independent deputies.[4] According to official reports, turnout is near 100%, and approval of the Democratic Front's candidates is unanimous or nearly so.[1]

In reply to a question put forth by Michael Marshall, Li Chun Sik of North Korea stated at a meeting of the Association of Secretaries General of Parliaments (ASGP) of the Inter-Parliamentary Union:[5]

Only one candidate appears on the ballot.[6][7] Elections are ostensibly conducted by secret ballot, and a voter may cross off the candidate's name to vote against him/her, but must do so by crossing out the name in a special booth.[6] Voting is mandatory and turnout is habitually near 100%.[8]

Mayors and governors are elected. Their role is to work with the unelected and more influential city and province party secretaries.[11]

The elections have been variously described as show elections or a political census.[12][13] Seats are uncompetitive as all candidates are chosen and won by the Democratic Front for the Reunification of the Fatherland.[3][5][7] Because of the near-100% turnout, elections double as unofficial censuses. The inminban neighborhood watch reportedly watches the elections to identify and investigate no-shows.[8]

A voter may cross off the candidate's name to vote against him or her, but must do so with a red pen next to the ballot box in sight of electoral officials, or there may be a separate ballot box for 'no' votes.[14] Many North Korean defectors claim such an act of defiance is too risky to attempt.[6]

The latest election was the first conducted under the leadership of Kim Jong-un following the death of Kim Jong-il in December 2011.

The last election conducted under the leadership of Kim Jong-il was held on March 8, 2009. The following day, North Korean media announced that he was unanimously re-elected to parliament, though none of his sons were among the appointments.[16] The election committee also stated that 99.98% of all registered voters took part in voting, with 100% voting for their candidate in each district.[17] All seats were won by the Democratic Front for the Reunification of the Fatherland, under the control of the Worker's Party.[3]