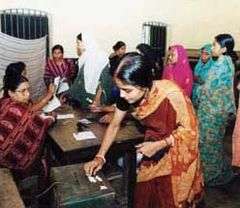 Scene from a polling booth in Bangladesh

Bangladesh elects on national level a legislature with one house or chamber. The unicameral Jatiyo Sangshad, meaning national parliament, has 350 members of which 300 members are directly elected through a national election for a five-year term in single-seat constituencies while 50 memberships are reserved for the women who are selected by the ruling party or coalition. The Prime Minister is the head of the government. The president who is the head of the state is elected by the National Parliament. The president of Bangladesh is a ceremonial post and he/she does not exercise any control over the running of the state.

Bangladesh has an unofficial two-party system which has evolved over time since the election of 1991. It means that there are two dominant political parties or coalitions, with extreme difficulty for anybody to achieve electoral success under the banner of any other party in terms is single majority.

The Parliament of Bangladesh (Jatiyo Sangsad) consists of 350 members elected to five-year terms. Of that number, 300 are elected in single-member territorial constituencies according to the First-Past-the-Post electoral system. The remaining 50 seats are reserved for women, and are filled on the basis of proportional representation by a vote of the 300 members.

As the 10th Assembly of Parliament first sat on 29 January 2014 the next elections for the Bangladesh Parliament are to be held no later than 28 January 2019.

Since 1971, ten parliamentary elections have been held in Bangladesh.