Elliot Lake is a city in Algoma District, Ontario, Canada. It is north of Lake Huron, midway between the cities of Sudbury and Sault Ste. Marie in the Northern Ontario region.

Prior to the settlement of the city, an Ojibwa village existed near the present hospital site on the lake's shoreline.

The city was established as a planned community for the mining industry in 1955 after the discovery of uranium in the area, and named after the small lake on its northern edge. By the late 1950s, its population had grown to about 25,000.[2] It was originally incorporated as an improvement district. Geologist Franc Joubin and American financier Joseph Hirshhorn were instrumental in its founding. The principal mining companies were Denison Mines and Rio Algom. The population has varied with several boom-and-bust cycles from the 1950s to the 1990s, from a high of over 26,000 to a low of about 6,600.

In 1959, the United States declared that it would buy no more uranium from Canada after 1962. During the 1970s, federal plans for CANDU Reactors and Ontario Hydro's interest in atomic energy led the town, anticipating a population of 30,000, to expand again. However, by the early 1990s depleted reserves and low prices caused the last mines in the area to close.

Elliot Lake was incorporated as a city in 1990. In the years since, the city looked elsewhere for its survival, finding some success promoting itself as a retirement community[2] and tourist destination. In the late 2000s, mineral exploration began taking place in the area, with at least one new mine under preliminary development by start-up miner Pele Mountain Resources.[3]

On June 23, 2012, part of a roof collapsed at Algo Centre Mall, sending metal and concrete debris crashing down through two floors of the shopping centre. The accident killed two people.[4] Pearson Plaza is under construction, set for a late 2016 open.

In 1974, uranium miners in Elliot Lake became alarmed about the high incidence of lung cancer and silicosis, and they went on strike over health and safety conditions. The government appointed a Royal Commission to investigate health and safety in mines. Chaired by Dr. James Ham, it became known as the Ham Commission.[6] According to University of Toronto history professor Laurel Sefton MacDowell in her 2012 article 'The Elliot Lake Uranium Miners’ Battle to Gain Occupational Health and Safety Improvements, 1950–1980', the health concerns over radiation in the local environment are perpetual, and must be monitored perpetually.[7] 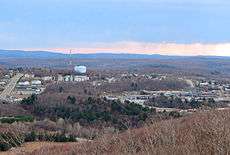 Situated on the Canadian Shield, the city is surrounded by dense forest, muskeg swamps, numerous lakes, winding rivers, and hills of Precambrian bedrock. The local forests are mixed deciduous and coniferous, with colourful displays in the autumn.

Since December 1990 the town has been home to the Elliot Lake Research Field Station, established by Laurentian University to investigate environmental radioactivity.

Acclaimed Canadian photographer Edward Burtynsky has taken landscape pictures of uranium and nickel tailings during the mid-1990s, providing evidence of the after-effects to the ecosystem.

Relatively isolated, Elliot Lake is connected to the south only by Highway 108, a 30 km distance to Highway 17, also known as the Trans-Canada Highway. North of the city, Highway 639 extends for 24 kilometres to its terminus at Highway 546, an almost entirely unpopulated route used primarily as an access road to Mississagi Provincial Park and a few private wilderness recreation lodges. The Deer Trail Route, a part of the Ontario Tourist Route network, follows a circle consisting of Highways 17, 108, 639 and 546.

A 1991 study by the Ontario Ministry of Transportation proposed the extension of Highway 555 (Granary Lake Road) from Blind River to meet Spine Road in Elliot Lake, creating a new route which would reduce the length of a commute between the two communities by approximately 20 kilometres.[12] Although the ministry has announced no firm plans to construct the proposed road, Elliot Lake City Council passed a motion in August 2015 calling for the project's revival.[12]

Local festivals include the Jewel in the Wilderness Festival, Heritage Weekend and the Elliot Lake Arts on the Trail festival.[13]

The city is home to Denison House, a hotel and convention facility located in the former corporate lodge of Denison Mines, and the Elliot Lake Mining and Nuclear Museum. Two community monuments, the Uranium Atom Monument downtown and the Miners Memorial Monument on Horne Lake, are also found in the city, as well as a scenic lookout at the former fire tower.

In 1975, Canadian musician Stompin' Tom Connors recorded "Damn Good Song for a Miner," about the city of Elliot Lake and its mining culture in the 1960s. Elliot Lake is also a prominent setting in Alistair MacLeod's award-winning novel No Great Mischief. 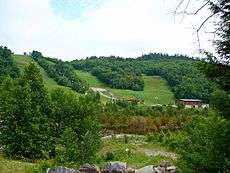 Elliot Lake has one commercial radio station, which operates two transmitters due to signal deficiencies in parts of the city. All of its other radio services are rebroadcasters of stations from Sudbury.

Elliot Lake was previously served by CBEC-TV, VHF channel 7, and CBLFT-TV-6, VHF channel 12, which rebroadcast the Toronto-based stations CBLT-DT (CBC Television) and CBLFT-DT (Ici Radio-Canada Télé), respectively. These rebroadcasters were shut down in 2012 due to budget cuts at the Canadian Broadcasting Corporation.