The FIFA Confederations Cup is an international association football tournament for national teams, currently held every four years by FIFA. It is contested by the holders of each of the six FIFA confederation championships (UEFA, CONMEBOL, CONCACAF, CAF, AFC, OFC), along with the FIFA World Cup holder and the host nation, to bring the number of teams up to eight. 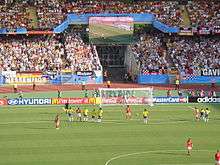 Germany against Brazil in the Grundig-Stadion in Nuremberg, Germany in the 2005 FIFA Confederations Cup

The tournament was originally organized by and held in Saudi Arabia and called the King Fahd Cup (Confederations Winners Cup or Intercontinental Championship), contested in 1992 and 1995 by the Saudi national side and some continental champions. In 1997, FIFA took over the organization of the tournament, named it the FIFA Confederations Cup and staged the competition every two years.[1]

Since 2005, it has been held every four years, in the year prior to each World Cup in the host country of the forthcoming World Cup (the 2001 edition was hosted in South Korea and Japan, before the quadrennial pattern was established). Considered a dress-rehearsal for the World Cup it precedes, it uses around half of the stadia intended for use at the following year's competition and gives the host nation, which qualifies for that tournament automatically, experience at a high level of competition during two years of otherwise friendlies. At the same time, participation was made optional for the South American and European champions.[2]

Generally, the host nation, the World Cup holders, and the six continental champions qualify for the competition. In those cases where a team meets more than one of the qualification criteria (such as the 2001 tournament where France qualified as the World Cup champions and European champions), another team is invited to participate, often the runner-up in a competition that the extra-qualified team won.

On four occasions teams have chosen not to participate in the tournament. Germany did so twice, first in the 1997 Confederations Cup after their victory in the Euro 1996, and again in the 2003 Confederations Cup when they were awarded a place as the 2002 World Cup runners-up. In 1997, Germany were replaced by 1996 runners-up Czech Republic, and in 2003 they were replaced by Turkey, the 2002 third place team.

An earlier tournament existed that invited former World Cup winners, the Mundialito, or Copa de Oro which celebrated the fiftieth anniversary of the first World Cup. The Artemio Franchi Trophy, contested in 1985 and 1993 between the winners of the Copa América and UEFA European Football Championship, was also another example of an earlier contest between football confederations. Both of these are considered by some to be a form of an unofficial precursor to the Confederations Cup, although FIFA recognised only the 1992 tournaments onwards to be Confederations Cup winners.[3]

The 8 qualified teams are ranked, with a draw, in two round-robin groups: two teams of same confederation cannot be drawn in a group, except if there are three teams of the same confederation (something that happened for the first time in the 2017 edition with Russia, host, Germany, world champions, and Portugal, European champions). Every team faces others once, for three games: the group stage is followed by a knockout phase.

For semifinals and finals, if the score is drawn at the end of regular time the match ends with overtime or shoot-out.