Ethapur s a panchayat town in Pethanaickenpalayam Taluk in Salem District in the state of Tamil Nadu, India. Ethapur also referred as "Vasishtronum" named by Vashista one of the Saptarishis (seven great Rishis).

The land for Govt. Higher Secondary School and the Main building has been donated by Alagiri Iyer family. They have also donated land for the town's hospital and police station.

Sarvotthamuka Athirudhra Yagnyam was conducted in Yethapur in the year 1938 with the patronage of Sri Alagiri Iyer family. This place is still known today as Yaga Salai in Yethapur Agraharam. 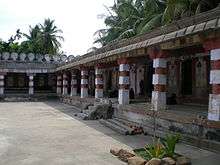 it was founded in 1991,by the founder of Kalaivani school Mr.B.Nazeer ahamed.it is the famous school in ethapur.Next year they celebrate the Silver jubliee. it is the first nursery school which runs above 24 yrs in attur region.