For other uses, see List of topics named after Leonhard Euler § Euler's identities.

In mathematics, Euler's identity[n 1] (also known as Euler's equation) is the equality

e is Euler's number, the base of natural logarithms,
i is the imaginary unit, which satisfies i2 = −1, and
π is pi, the ratio of the circumference of a circle to its diameter.

Euler's identity is named after the Swiss mathematician Leonhard Euler. It is considered an example of mathematical beauty. 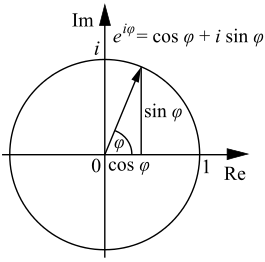 Euler's formula for a general angle

Euler's identity is a special case of Euler's formula from complex analysis, which states that for any real number x,

where the inputs of the trigonometric functions sine and cosine are given in radians.

Furthermore, the equation is given in the form of an expression set equal to zero, which is common practice in several areas of mathematics.

Stanford University mathematics professor Keith Devlin has said, "like a Shakespearean sonnet that captures the very essence of love, or a painting that brings out the beauty of the human form that is far more than just skin deep, Euler's equation reaches down into the very depths of existence".[5] And Paul Nahin, a professor emeritus at the University of New Hampshire, who has written a book dedicated to Euler's formula and its applications in Fourier analysis, describes Euler's identity as being "of exquisite beauty".[6]

The mathematics writer Constance Reid has opined that Euler's identity is "the most famous formula in all mathematics".[7] And Benjamin Peirce, a noted American 19th-century philosopher, mathematician, and professor at Harvard University, after proving Euler's identity during a lecture, stated that the identity "is absolutely paradoxical; we cannot understand it, and we don't know what it means, but we have proved it, and therefore we know it must be the truth".[8]

A study of the brains of sixteen mathematicians found that the "emotional brain" (specifically, the medial orbitofrontal cortex, which lights up for beautiful music, poetry, pictures, etc.) lit up more consistently for Euler's identity than for any other formula.[11]

Euler's identity is also a special case of the more general identity that the nth roots of unity, for n > 1, add up to 0:

Euler's identity is the case where n = 2.

In another field of mathematics, by using quaternion exponentiation, one can show that a similar identity also applies to quaternions. Let {i, j, k} be the basis elements, then,

It has been claimed that Euler's identity appears in his monumental work of mathematical analysis published in 1748, Introductio in analysin infinitorum.[12] However, it is questionable whether this particular concept can be attributed to Euler himself, as he may never have expressed it.[13] (Moreover, while Euler did write in the Introductio about what we today call "Euler's formula",[14] which relates e with cosine and sine terms in the field of complex numbers, the English mathematician Roger Cotes also knew of this formula and Euler may have acquired the knowledge through his Swiss compatriot Johann Bernoulli.[13])